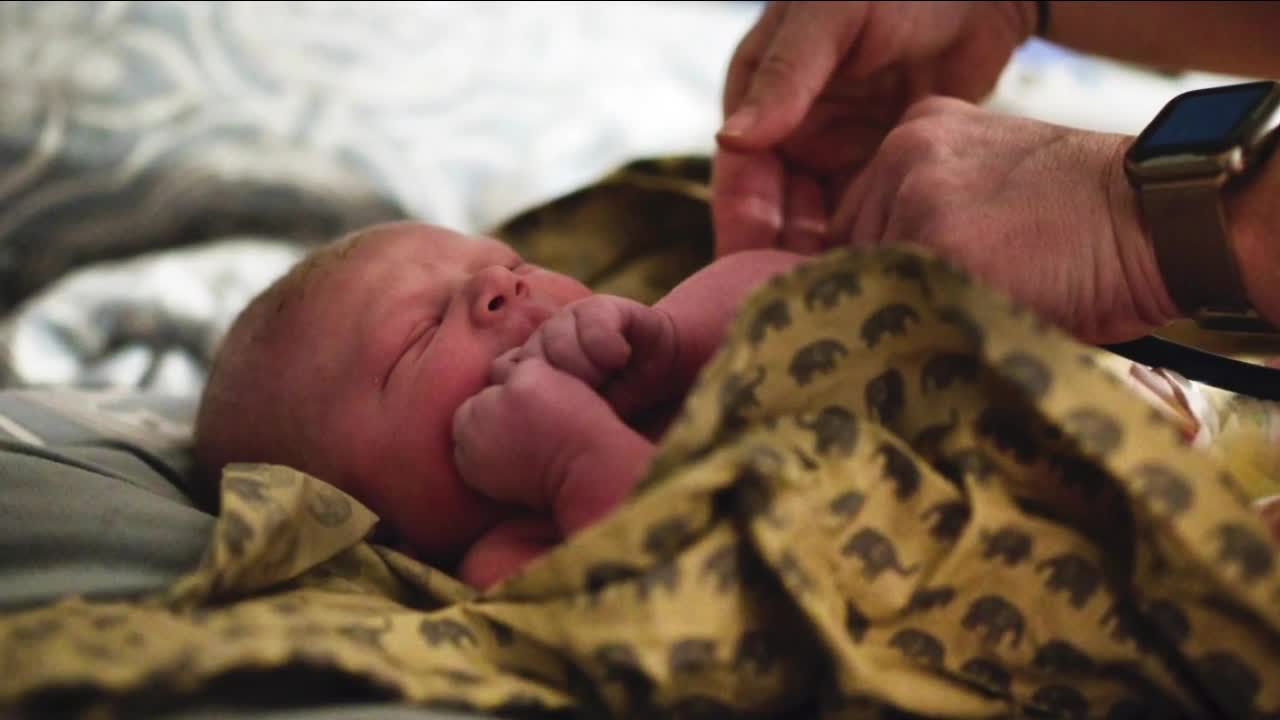 Searches for home birth information in Ohio spiked around March 15. It fell slightly two weeks later then, similar to the U.S. data, spiked again in April. CLEVELAND — In March, Rachel O'Donnell was a busy mom with three kids. She was nearing the end of her fourth pregnancy when the stay-at-home started in Ohio.

"Actually, she came late," O'Donnell said. "She was not born until April 18."

Her newest baby girl was born at home which wasn't the original plan.

But, an experienced mom, O'Donnell knew what happens to best laid plans.

"You know that, whatever plan you have is going to go out the window because none of them ever go according to plan," she said with a laugh.

She can laugh about her latest birth now but having her daughter at home was a last minute decision.

It was the same way for Michelle Witten.

"It was the pandemic that ultimately pushed me in this direction," she said.

With uncertainty around the virus and rolling changes in hospital procedure, Witten was anxious about having her second baby in the hospital.

She had several conversations with her husband about her concerns.

"I don't want to go through the [emergency room]," Witten said. "During a normal time that would be okay. But I'm really, really anxious at this point," Witten said about how she was feeling during the days leading up to her delivery.

At the very last minute, she made the switch from hospital to home.

On Sunday, March 22, Witten had a conversation with Colleen Kennedy-Schroeder, a midwife in the Cleveland area. By Tuesday her original plan was completely different.

"Around 8 o'clock, Colleen sent me her contract. I signed it electronically. Three hours later, I went in to labor," Witten said.

Her daughter, Maggie, was born on March 24. It was the very first day after the stay at home order was issued.

Witten and O'Donnell are not alone.

"People realize this is a safe option in some ways," Kennedy-Schroeder said. "Whether that's mentally because you can have your support person there or physically because you're avoiding the germs of the hospital."

Kennedy-Schroeder stressed she will take mothers to local hospitals if there is a complication or an emergency, but now, she isn't allowed to follow the women in.

"The inquiries are out of control," Kennedy-Schroeder said. "Probably three a day."

Before the pandemic started she said she would get about one call a week for midwifery services. She helped both O'Donnell and Witten during their home births.

Taking a look at 12 months worth of data from Google trends show searches for home births spike in the United States in mid-March. It also climbed and fell during the month of April but has not bottomed out with a zero search rate since January of this year.

Searches for home birth information in Ohio spiked around March 15. It fell slightly two weeks later then, similar to the U.S. data, spiked again in April.

Normally, Kennedy-Schroeder takes the summer off to travel with her family but the travel stoppages canceled her plans so she decided to work.

"Maybe it was the universe or whatever giving me space to fill," she said.

O'Donnell took up one of those spaces. She said she's glad she did.

"So even if I hadn't planned a home birth, I would have had one anyway," O'Donnell said about April 18. She was in labor for less than an hour. Her husband was home that afternoon instead of at their new house.

Her husband helped deliver their baby with Kennedy-Schroeder on the phone.