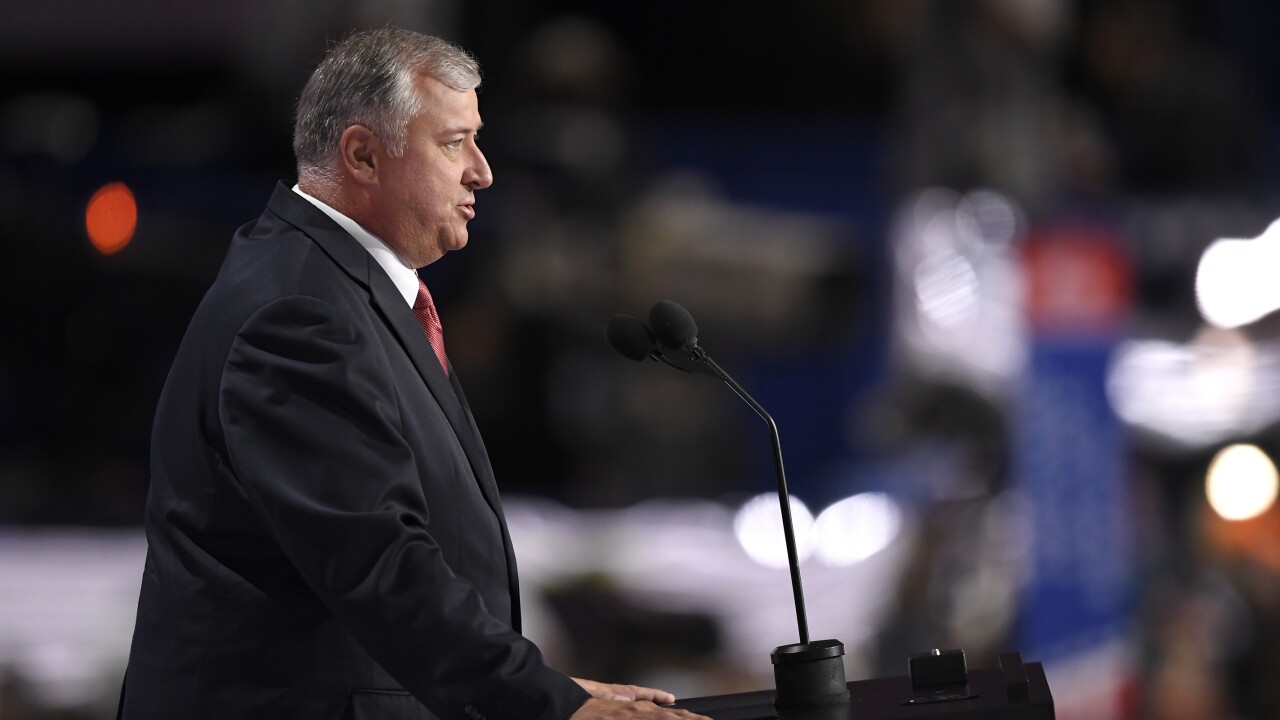 Mark J. Terrill/AP
FILE - In this July 18, 2016 file photo, former Speaker of the Ohio House Larry Householder speaks during the opening day of the Republican National Convention in Cleveland. The state watchdog is alleging widespread fraud within the Ohio agency that provides prison jobs for inmates, including furniture building and vehicle repair. A report released Thursday, Dec. 20, 2018, by Inspector General Randall Meyer accuses top employees of Ohio Penal Industries of using their positions for personal gain, such as discounts on personal car repairs by inmates. The IG report says Householder was provided an office table and chair set at no cost. (AP Photo/Mark J. Terrill)

COLUMBUS, Ohio (AP) — The Ohio House plans to vote Thursday on the removal of the disgraced House speaker arrested last week in connection with a $60 million federal bribery probe, after Republicans took a secret vote on the matter Tuesday that was prompted by Larry Householder’s refusal to resign.

It wasn’t immediately clear under what authority the remaining members of Householder’s leadership team called the session. Under House rules, only the speaker can call or schedule a session. The power falls to his No. 2, Speaker Pro Tempore Rep. Jim Butler, if the speaker is absent.

Ohio Attorney General Dave Yost briefed the gathering ahead of the vote, declining to comment to reporters because his advice was privileged.

“The decision by House Republicans today to proceed with removing Larry Householder as Speaker reflects the reality that while he is entitled to his day in court and a presumption of innocence until proven guilty, it has become abundantly clear that he has lost the trust of his colleagues and the public, and is unable to effectively lead this chamber,” House leaders minus Householder said in a statement.

Tuesday’s closed-door meeting at a downtown hotel followed the release of a July 21 federal affidavit identifying Householder and four associates as part of an alleged pay-to-play scheme involving millions of dollars of corporate money secretly funneled to them for personal and political use in exchange for passing legislation to bail out two FirstEnergy nuclear plants.

The Republican speaker has not returned messages seeking comment and his attorney declined comment Tuesday. A new message left with Householder’s team following the vote didn’t receive an immediate response.

Representatives, many masked, rotated in and out of a conference room because of social distancing requirements.

State Rep. Niraj Antani, a Dayton Republican, said he voted with the majority of about 50 representatives gathered behind closed doors at a downtown hotel to make the decision.

“While we still need to vote on the floor officially, this is the first step to restoring integrity to the House,” he said in the statement.

Also during their meeting, Ohio Republican Party Chair Jane Timken let representatives know that the party will take over overseeing their fall campaigns. Spokesman Evan Machan said mechanics of transfer are still being worked out.

The calls for Householder’s resignation have crescendoed in recent days, with even fellow Republican Gov. Mike DeWine calling for him to step down, saying it would be impossible for Householder to be an effective legislative leader given the charges against him.

Householder has thus far ignored those calls from colleagues in both parties, pushing Democratic leaders in the House to pen a letter Monday “strongly encouraging” the GOP leadership’s swift action in removing the speaker from his post.

“While we acknowledge the presumption of innocence until proven guilty, it is clear that given the scale of the charges and restrictions put on him at arraignment that Mr. Householder is incapable of fulfilling the duties of Speaker,” the letter read.

Majority Floor Leader Bill Seitz said he spoke to Householder on Friday and shared with him the names of House members who have called for his resignation plus those who have declared candidacies to replace him.

“I told him, ‘You’re the master vote counter, you count the noses,’” said Seitz. He said he stuck to “just the facts” in their discussion and didn’t strategize in any way with Householder or discuss the allegations against him.

Seitz and the caucus’ other leaders said at least 50 votes will be needed Thursday to remove Householder.

If he is removed, a decision on when to schedule a vote on his successor will be made by Assistant Majority Floor Leader Anthony DeVitis, of Green. Potential candidates for the job include Reps. Rick Carfagna, Bob Cupp, Tim Ginter and Speaker Pro Tem Butler.

Cupp declined to say whether he or the other candidates made presentations during the meeting. He said attendees were “all unified” on how to moving forward, though neither he nor others would say what the exact vote count was.

Also Tuesday, DeWine said he plans to present lawmakers with a proposal to provide more transparency by so-called “dark money” groups, which don’t have to disclose their contributors. One such group is alleged to have been the go-between in the bribery investigation.

But DeWine cautioned that such groups are legal, and any proposals would have to be constitutional.

“We have to distinguish between the allegations in regard to Mr. Householder, that part of those allegations that talk about something that’s illegal, vs. the mere existence of independent expenditure groups, which is not illegal,” DeWine said.