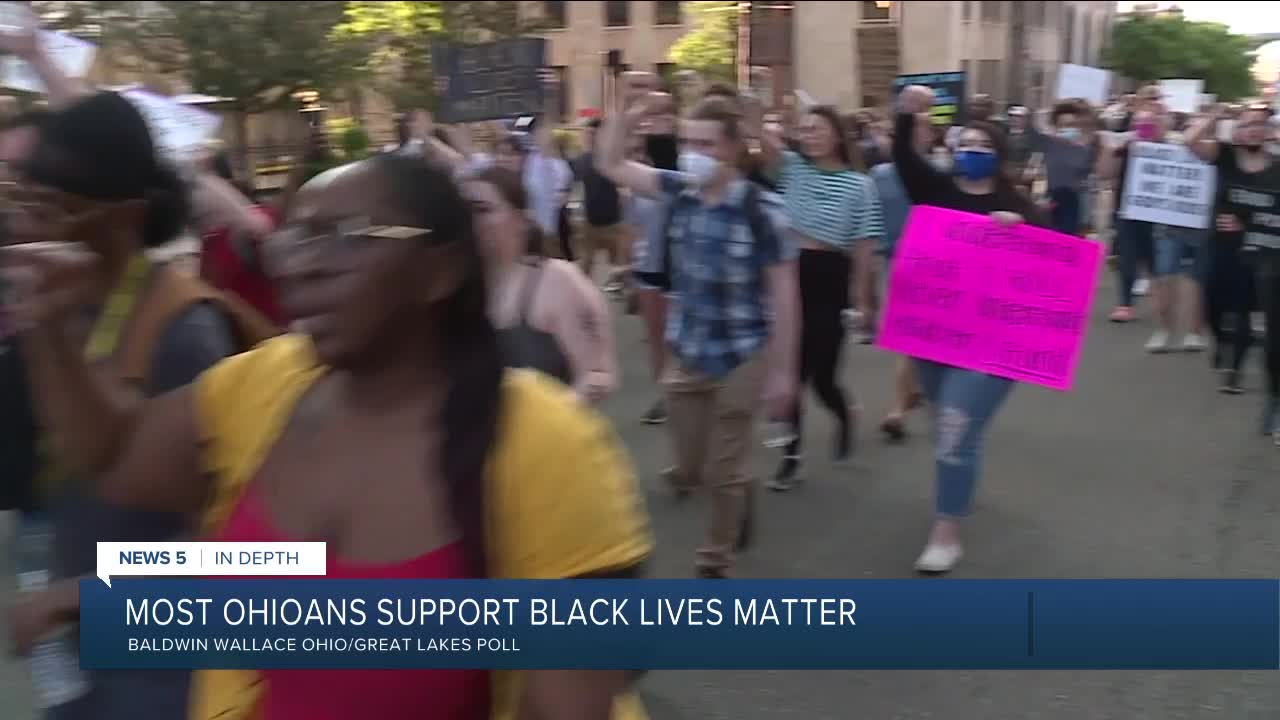 The presidential race in Ohio a dead heat between Trump and Biden in, according to a new Baldwin Wallace Poll. 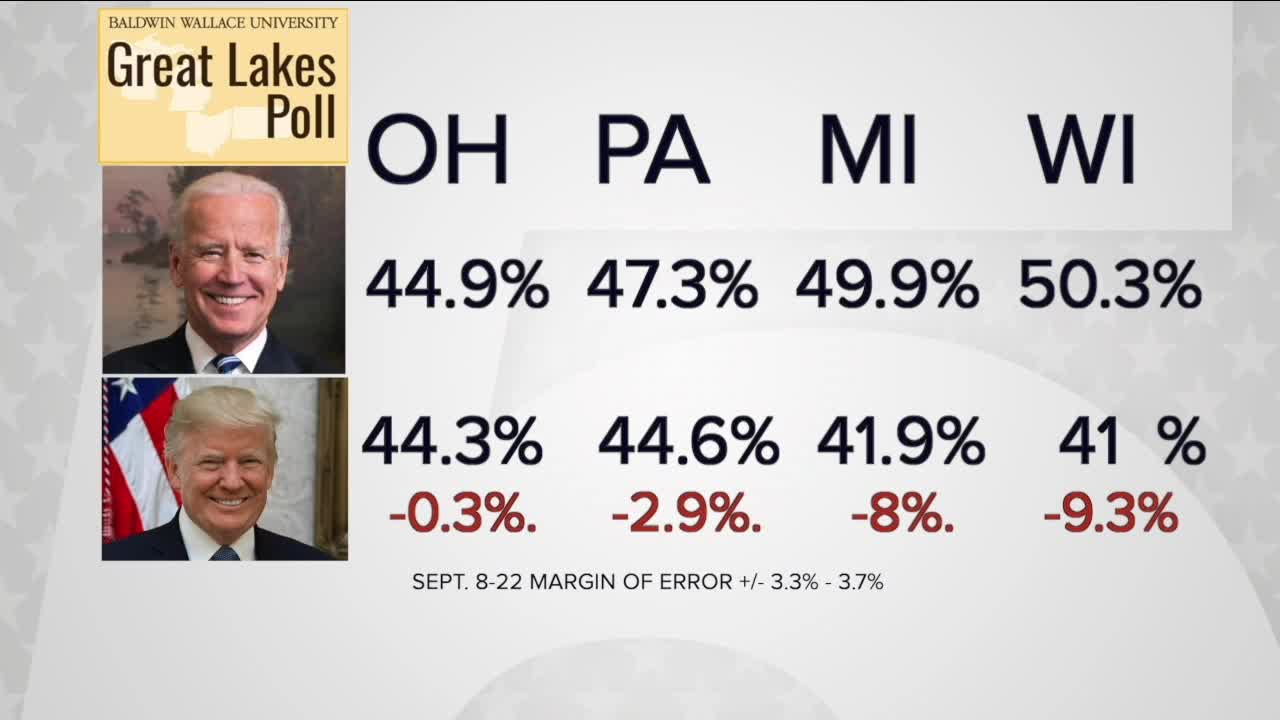 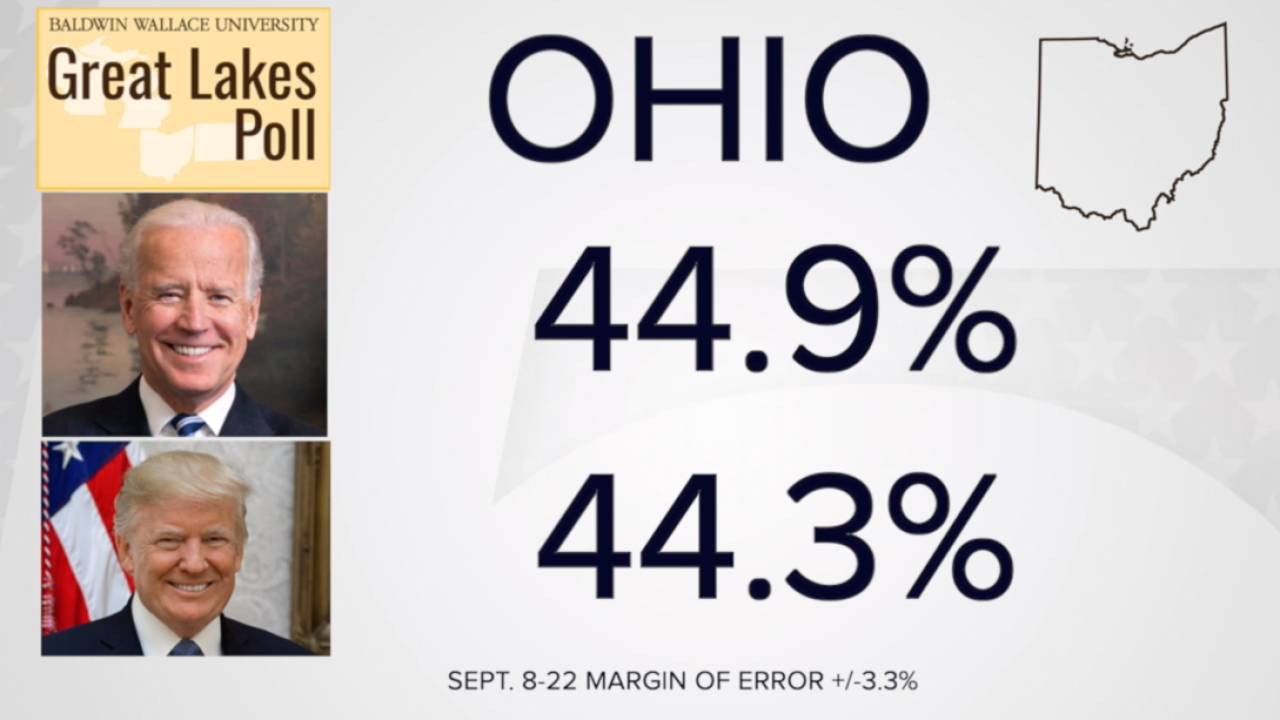 BEREA, Ohio — Former Vice President Joe Biden holds the slimmest of leads in Ohio over President Donald Trump, according to a new Great Lakes poll released this morning by Baldwin Wallace University. Some 44.9% of the Ohio voters surveyed said they were voting for Biden, versus 44.3% for Trump, a difference of just 0.6% and well within the poll's 3.3% margin of error.

The poll also looked at the battleground states of Pennsylvania, Michigan and Wisconsin. In Pennsylvania, Biden holds a 47.3% to 44.6% edge, in Michigan voters surveyed said they were voting for Biden by a 49.9% to 41.9% margin, with the gap even larger in Wisconsin, where Biden holds a 9.3% lead.

“The tight race in Ohio should concern Republicans," said Dr. Lauren Copeland of Baldwin Wallace University. "Having to expend resources in a state that was once considered a safe state for Trump means having fewer resources to deploy in other competitive states such as Pennsylvania, which is increasingly seen as the state most likely to decide who wins the Electoral College.”

A metric watched closely this year is approval rating, which for a sitting president is often a good indicator more so than it is for a challenger. The poll showed the president underwater in all four states, with his favorable rating in Ohio at 43.8%, Pennsylvania 44.8%, Michigan 40.6% and Wisconsin 39.4%.

The poll was conducted as a record number of Ohioans have already mailed in their requests for absentee ballots this year. The survey found 46.1% said they planned to vote in person on election day, 41.9% plan to vote by mail, and 8.5% say they will vote early in person at their board of elections office. About 88% of voters are "somewhat" or "very" confident that their votes will be counted, despite conflicting predictions about the reliability of voting systems.

“We see a sharp partisan divide in how voters intend to cast their ballots as Democrats are far more likely to vote by mail or absentee. This makes Pennsylvania’s recent Supreme Court ruling to not count so-called ‘naked ballots’ much more important in what should be a close election,” said Dr. Robert Alexander of Ohio Northern University.

Pennsylvania is one of 16 states that requires a secrecy envelope or sleeve for all ballots returned by mail to ensure the secrecy of every ballot. CNN found that in 2019, 6.4% of absentee ballots were "naked." At that rate, they determined that 30,000 to 40,000 could go uncounted in Philadelphia alone and more than 100,000 statewide. Pennsylvania went for President Trump in 2016 by just 44,000 votes.

Voters in all four states were also asked about how their governors have handled the coronavirus pandemic, with those in Ohio giving Gov. Mike DeWine the highest grades among the bunch.

More than 70% of Ohio voters approve of the way DeWine has handled the pandemic, with 25.9% disapproving. The numbers are down about eight points from the March Great Lakes poll but are still strong compared to the approval for governors in Michigan 64.7%, Wisconsin 58.6% and Pennsylvania 57.9%.