Election Day 2020 live updates: Donald Trump is the projected winner in Ohio, according to ABC News 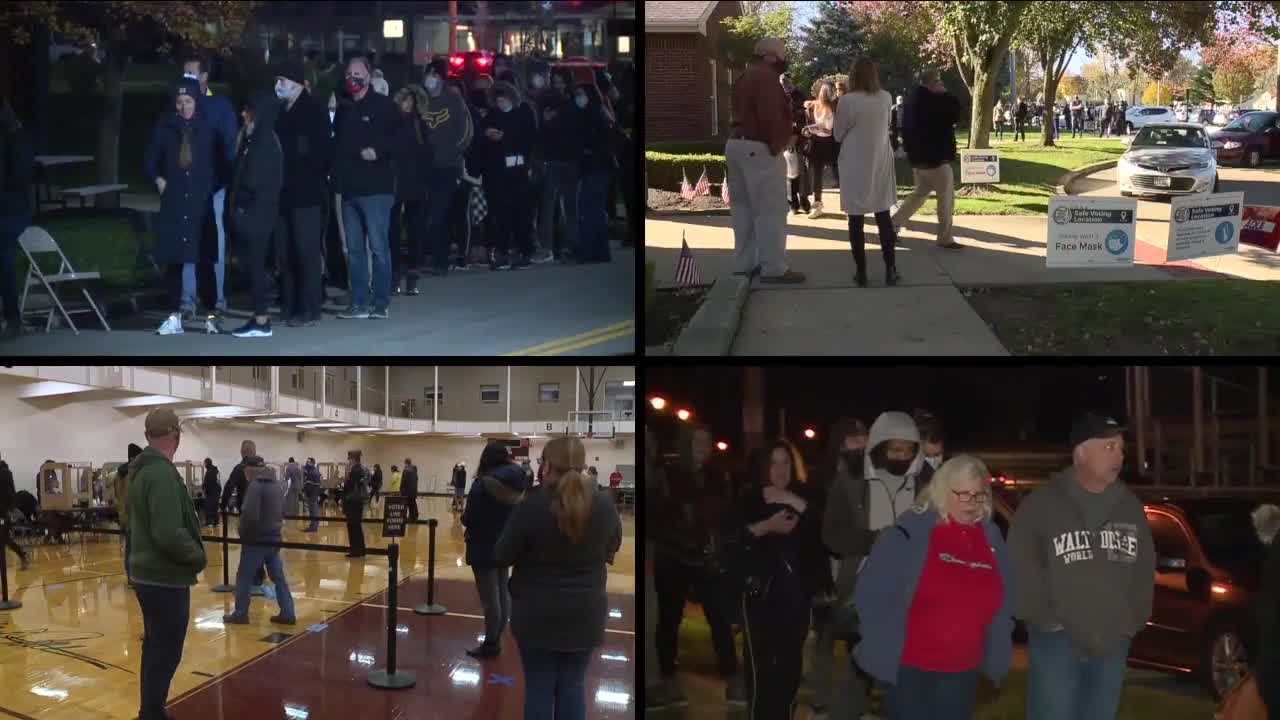 News 5 Cleveland provides team coverage of Election Day and election night with long lines of voters across Northeast Ohio, and Donald Trump in the lead in Ohio. 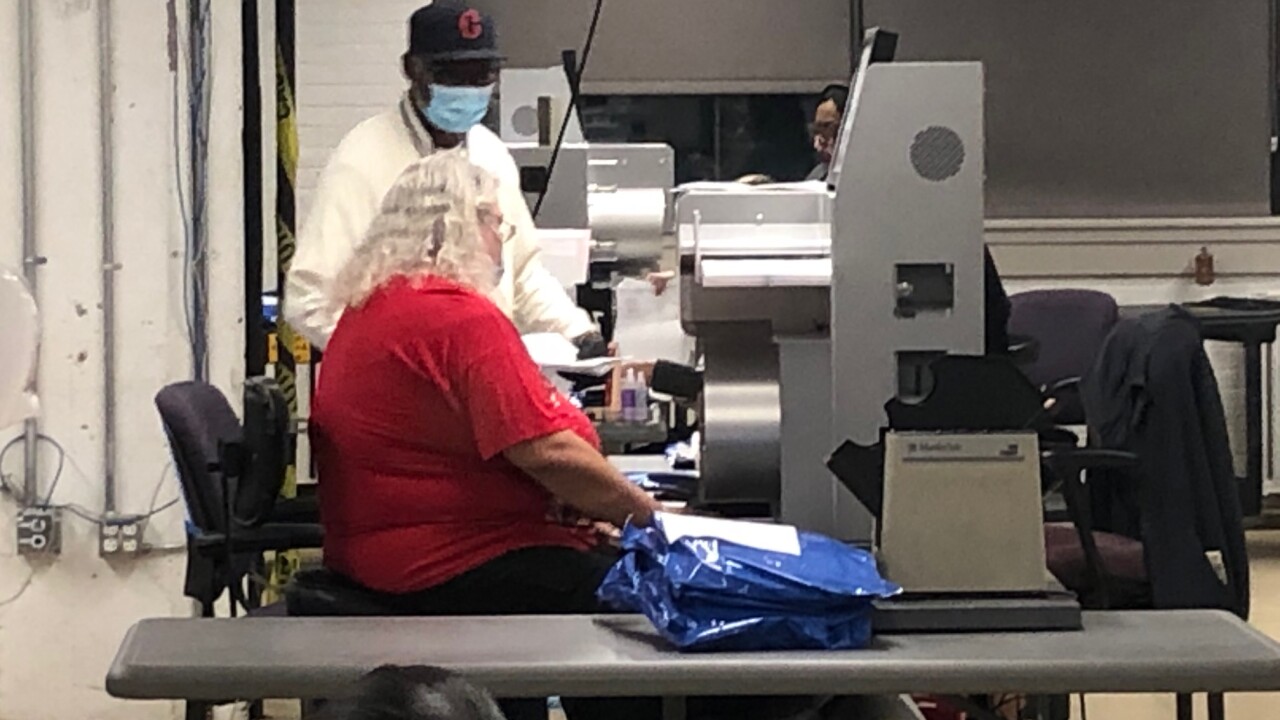 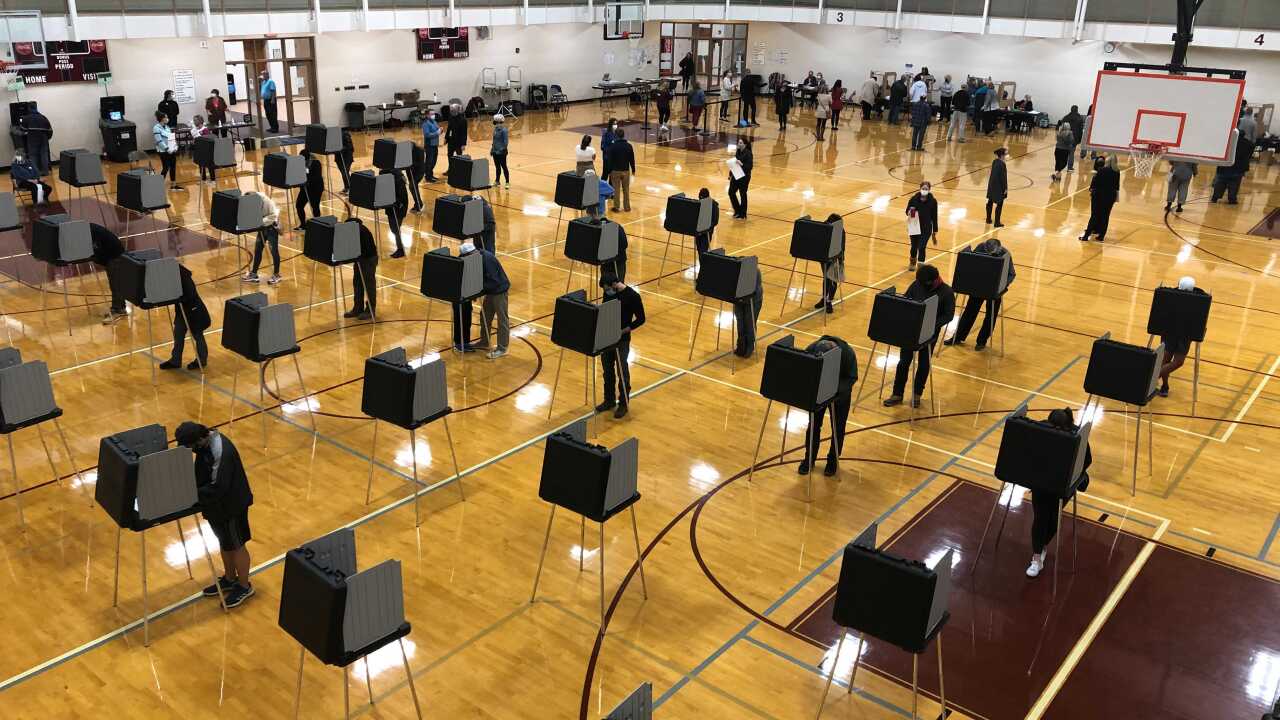 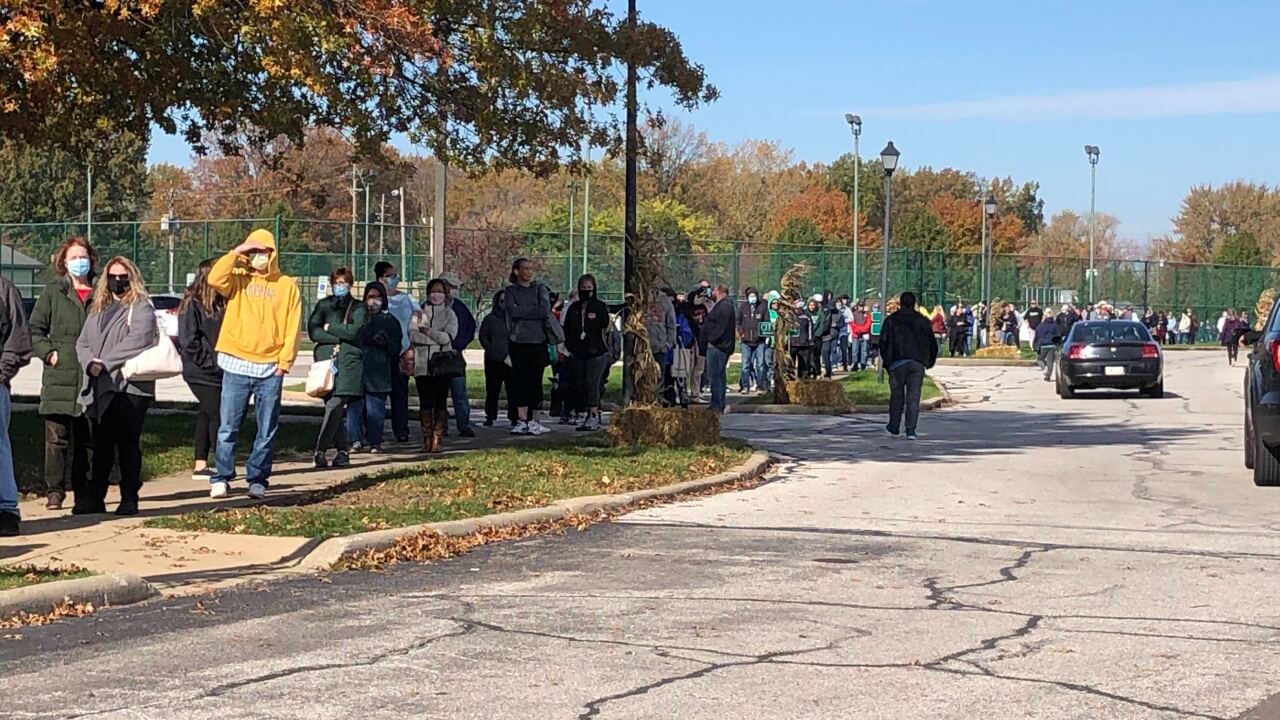 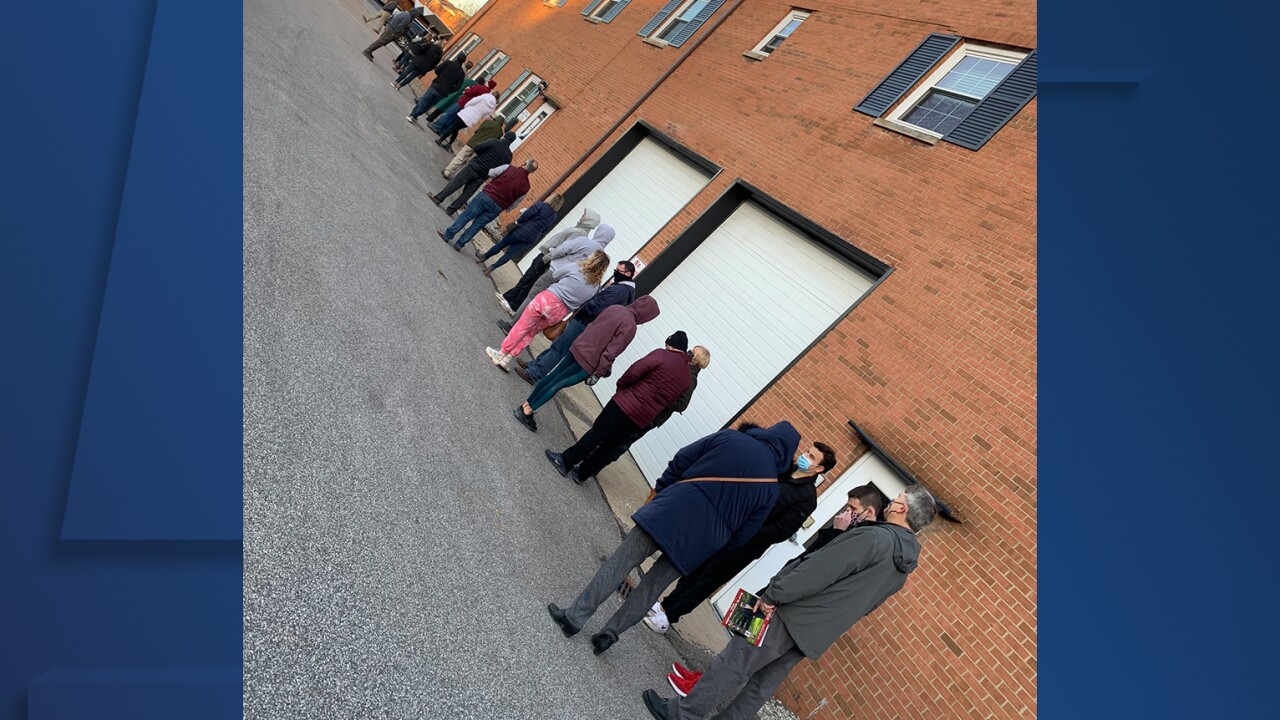 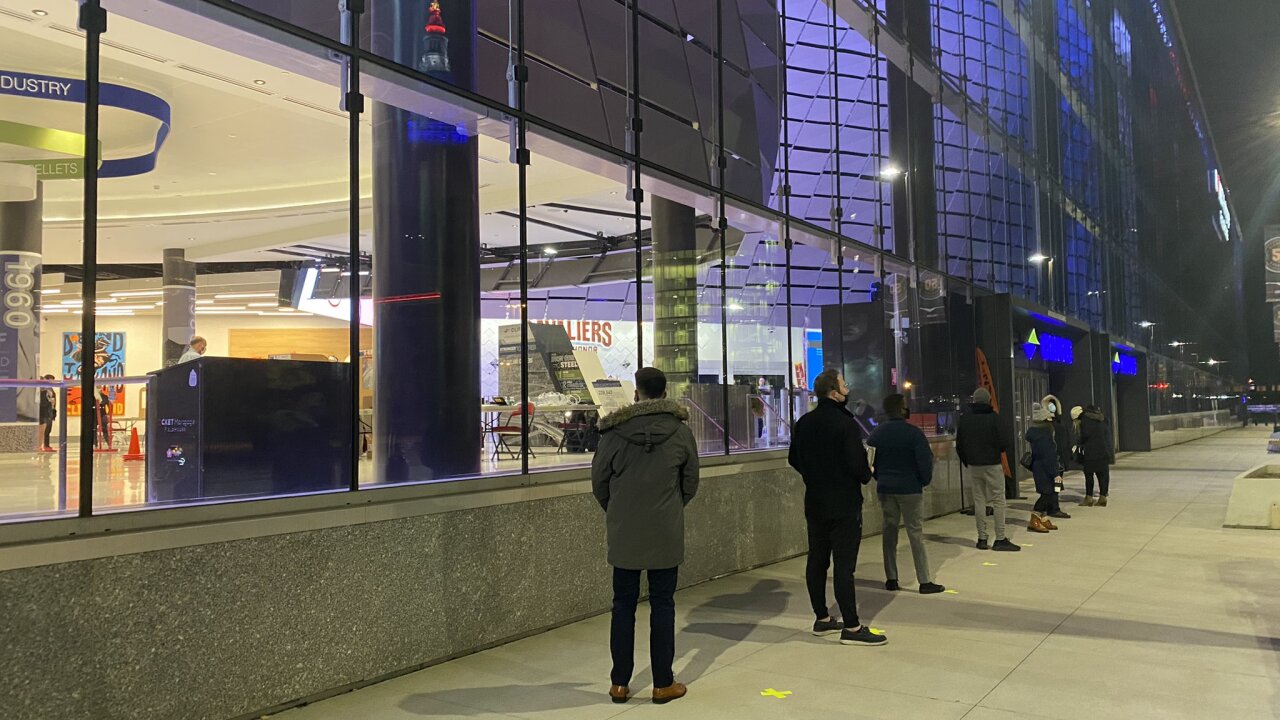 CLEVELAND — Election Day is finally, finally, finally here. In the weeks leading up to today, 3.4 million Ohioans have already cast their absentee ballots or voted early, according to Ohio Secretary of State Frank LaRose. Today, the rest of the state's voters will cast their votes, and the fate of the presidency, local house races and scores of local issues such as school levies will be determined.

This blog contains updates from throughout the day Tuesday.

RESULTS - View our results page for live local, state, and national results as they come in.

Watch continuing election night (and Wednesday morning) coverage of the 2020 election from ABC News below:

3:20 AM
The Akron Zoo announced that its campaign strategists informed them Tuesday night that Issue 47 will pass, providing funding to be used to fund operational expenses, maintenance and expand educational programming for the growing zoo. Read more here.

3:09 AM
Democrat Joe Biden has won Arizona and its 11 electoral votes, flipping a critical battleground state that Donald Trump won four years ago and that could help determine which candidate wins the presidency. The victory by Biden was a huge blow to Trump’s chances for reelection. Arizona has backed a Democratic presidential candidate only once in the last 72 years.

2:30 AM
President Donald Trump issued a statement declaring victory in Tuesday's presidential election, adding that he believes that the election is being stolen. There is no evidence at this time of any widespread election or voting fraud.

1:14 AM
Trump has won Texas, holding off a Biden challenge in the state. Trump has narrowly caught up to Biden’s lead in the Electoral College.

12:35 AM
Trump won the state of Florida in arguably the biggest and most important call of the night.

12:25 AM
In recent minutes, the Associated Press has called Hawaii and Minnesota for Biden; Trump has won Ohio, Montana and Iowa.

12:04 AM
ABC News has called Donald Trump as the winner of Ohio, repeating his 2016 victory in our bellwether state. More here.

7:30 PM
The polls are officially closed in Ohio. Stay tuned here for live local, state and national results as they come in throughout the evening.

6:11 PM
Athletic departments across Northeast Ohio are encouraging others in their community to vote. More here.

5:34 PM
Voters in Brook Park lined up for hours to cast their ballots at the city’s recreation center Tuesday, as lines topped anything poll workers and long-time voters said they’d ever seen. More here.

5:12 PM
Election officials in Summit County have reported some clerical confusion after several polling locations were consolidated into one due to COVID-19. There was also one report of voter intimidation at one polling location, but officials said that ended up being a false report. More here.

4:52 PM
Black voters are returning to the polls after a dip in turnout in 2016 and a summer of civil unrest. Read Caroline Sweeney's full report here.

4:36 PM
Secretary of State Frank LaRose says the election in Ohio is going "smoothly." Have there been some hiccups? A few. Like the woman who ran her car into a polling station. Don't worry. That story has the most Ohio possible ending. More here.

4:22 PM
Long lines in Lyndhurst, short wait times in Painesville. How long you wait today depends on where you vote. More here.

News 5's Jonathan Walsh reported live from one line, where he spoke to several voters about why they decided to turn out:

Jonathan Walsh speaks to voters in line in Lyndhurst

2:54 PM
The Akron Police Department is warning residents not to fall for a robocall that is advising people to hold off on voting until tomorrow, which is extremely false information. More here.

2:45 PM
News 5 Investigator Sarah Buduson is at the Broadview Heights Community Center, where the line stretches around the entire building and voters are enduring a two-hour wait. Watch her update in the media player below.

Here is another angle from a photo shot by Buduson:

2 PM
If you’re voting in Cleveland today and are delivered a free slice of pizza while you’re waiting in line, it may have come from Portland Trail Blazers guard and Canton native CJ McCollum. Read more here.

1:13 PM
The coronavirus pandemic is not only changing how voters cast their ballot but also potentially who they vote for. Read more here.

12:45 PM
Longtime poll workers in Brook Park tell News 5's Scott Noll that they've never seen the crowds like this in the past. Neither has 99-year-old Lottie. Workers said voters lined up before 6 a.m.

12:05 PM
Our media partner at the Akron Beacon Journal met with a man at the Arlington Church of God in East Akron who was turned away from a poll because his ID showed that he lived in Stow even though he now lives in Akron. It turned out the man wasn't registered even though he thought he was. Remember you can still use your state ID, Ohio driver’s license, or military ID to vote today even if they do not reflect your current address. Read more here.

Ohio voters: Remember you can still use your state ID, Ohio driver’s license, or military ID to vote today even if they do not reflect your current address! As long as your voter registration includes your current address, you are fine. @beaconjournal

11:59 AM
At the end of the early voting period, 3.4 million Ohioans cast their ballots. That number is 60% of the total voter turnout in 2016, according to Ohio Secretary of State Frank LaRose. Read more here.

11:10 AM
A News 5 staffer saw campaign signs being removed from the ground at the St. Ladislas polling location in Westlake. Voters were told that signs could be carried but not placed into the ground. Someone later put the signs back in the ground. Democracy, man.

10:51 AM
Cuyahoga County Board of Elections Director Anthony Perlatti held an Election Day briefing Tuesday. Key takeaways from the briefing:

10 AM
Akron voters are reporting lines moving swiftly. Voting was brisk across Greater Akron with no reports of unexpected issues. Read more from News 5 media partner at The Akron Beacon Journal here.

Things seem to be running smoothly across Summit County. What are you seeing, voters? #ELECTIONDAY https://t.co/M7WefMM2on

9:30 AM
At Southview Middle School in Lorain, there is no line to vote.

Out early in Lorain where there’s no line outside at Southview Middle School.

9:15 AM
Over in Shaker Heights, lines outside polling locations are a bit more manageable as 59.5% of residents voted absentee ballot.

Only around 25 people outside of this Shaker Heights, Ohio polling place but remember Shaker voted 59.5% absentee so more manageable lines were expected. pic.twitter.com/l8TWaVpGEV

9:10 AM
Franklin County has shifted to paper poll books for Election Day. For years, the county has been using electronic poll books, which allow poll workers to quickly check in voters at their precinct polling location. Paper poll books could make the voting process slower for Ohio’s largest county. Read more here.

9:00 AM
The Cuyahoga County Board of Elections received a report that some voting machines are down at 22639 Euclid Avenue in Euclid. Board of election officials said there is more than one machine, so voters can use others while one machine is being replaced or repaired.

8:37 AM
With two hours in, 6% of Cuyahoga County voters have voted in person at the polls this morning.

2 hours in 6% of Cuyahoga County voters have voted in person at the polls this morning (on top of the record early vote taking turnout to 46%) pic.twitter.com/2CvfvMhcpd

7:50 AM
Long lines form outside the Parkside Administration Building/Board of Education Offices at 24525 Hilliard Blvd in Westlake.

7:15 AM
In suburban polling locations when polls opened at 6:30 a.m., News 5 viewers reported in cities like Mayfield Heights that approximately 500 people were already in line to cast their votes and voting took 90 minutes. In Euclid, long lines formed before doors opened at 6:30 a.m. A long line in Highland Heights moved quickly. At Maple High School, lines wrapped around school buildings ahead of the polls opening at 6:30 a.m. Long lines are also visible throughout the city of Cleveland.

6:30 AM
Polls are now open across Ohio. Where’s my polling place? What types of ID are and aren’t acceptable to vote? All your answers here.

6:15 AM
Voters have begun to line up at RocketMortgageFieldHouse and the Gunning Rec Center in Cleveland. Polls across the state of Ohio open at 6:30 a.m.

6 AM
Buildings and bridges in Cleveland are lit up in Patriotic colors on Election Day.