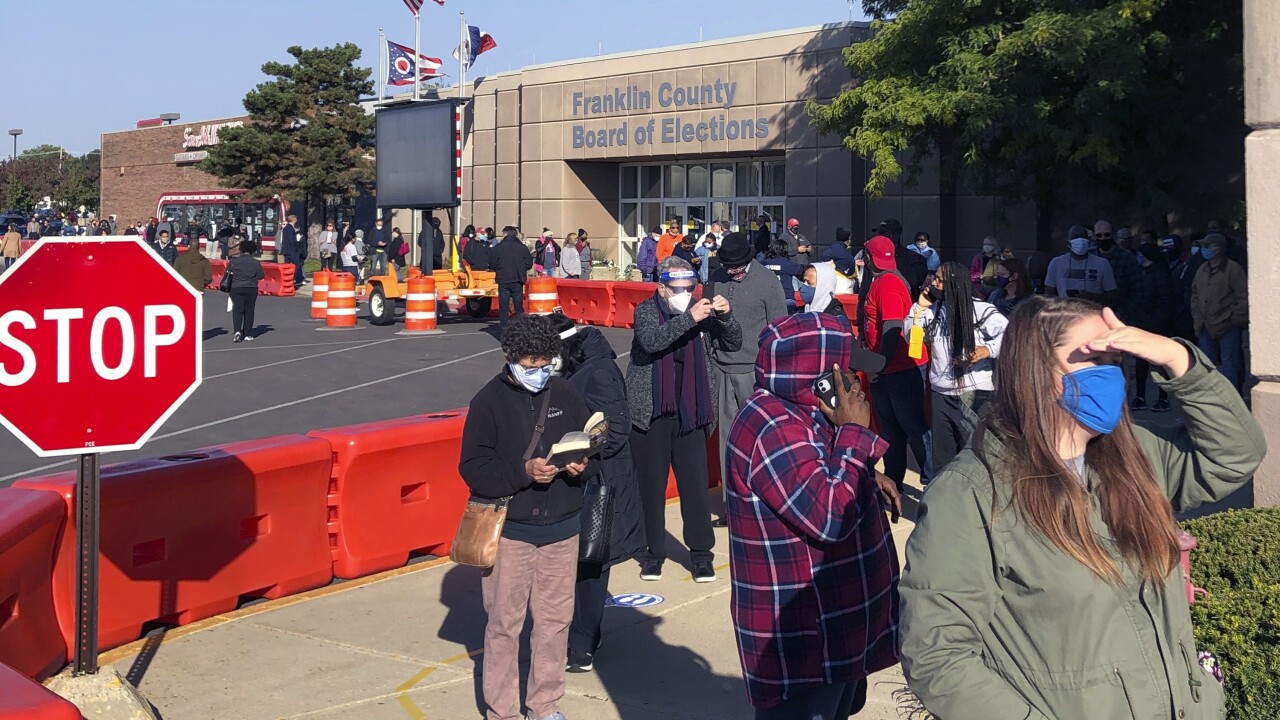 COLUMBUS, Ohio — President Donald Trump took to Twitter Friday afternoon to claim that the upcoming election is "rigged" after a tens of thousands of Ohio voters received incorrect absentee ballots—an issue he called "out of control."

What happened in Franklin County?
Nearly 50,000 voters received incorrect absentee ballots in the county that is home to Ohio’s capital, elections officials said Friday as they promised corrected ballots would be mailed within 72 hours.

With about 240,000 ballots mailed, that meant one in five voters received a wrong ballot. The error happened Saturday afternoon when someone changed a setting on a machine that places absentee ballots into mailing envelopes, Franklin County elections officials said Thursday.

Some ballots had an incorrect congressional race, while others had the correct information but were sent to voters in a different precinct. The Franklin County Elections Board said 49,669 voters received incorrect ballots out of 237,498 that were mailed.

Apology and rebuttal
The board of elections also tweeted a response to the president and admitted the mistake, but rebutted the president's claim that the election is rigged.

"Our board is bipartisan and our elections are fair," the BOE tweeted.

Mr. President, it certainly was a serious mistake, but a serious mistake that we’re working hard to make right. Our board is bipartisan and our elections are fair. And every vote will be counted. https://t.co/RMvOPdeAbT

Trump, who has alleged fraud associated with voting by mail with no evidence such fraud exists, quickly cited the Franklin County case on Twitter, calling it a case of a “rigged election.”

But just minutes after his tweet alleging fraud in Ohio, the president tweeted in support of Colorado, which has an all-mail balloting system.

COLORADO! Your mail ballots are being sent out beginning TODAY! Fill them out and VOTE #TrumpPence2020! https://t.co/gsFSghkmdM

“COLORADO! Your mail ballots are being sent out beginning TODAY! Fill them out and VOTE #TrumpPence2020!” the president tweeted

What happens next in Franklin County
The process to print, stuff the replacement ballots in envelopes and mail them was underway Friday, the Franklin County Elections Board announced earlier.

The board also said it will mail postcards to all affected voters detailing the situation and highlighting voters’ options moving forward. Those options include voting in-person at the board’s offices on the city’s north side.

The elections board said multiple checks are in place to ensure only one voter can cast a ballot, including rejecting any replacement ballots if someone went ahead and voted in person.

Focus on absentee ballots
The news of the incorrect ballots brought renewed focus on an election seeing an unprecedented number of absentee ballot requests, spurred by the coronavirus pandemic and concerns about in-person voting.

Mail-in vs. absentee voting
While the semantics vary across the country, the terms “mail-in voting” and “absentee voting” are causing major confusion.

A voting advocacy expert told News 5 that absentee and mail-in voting are one-and-the-same in Ohio.

“The place where it still overlaps is online,” the expert said. “The Secretary of State’s website calls it absentee voting. If you go to the Cuyahoga County Board of Elections website, they call it vote-by-mail. But it’s the same thing.”

RELATED: Mail-in vs. absentee voting: Is there a difference in Ohio?