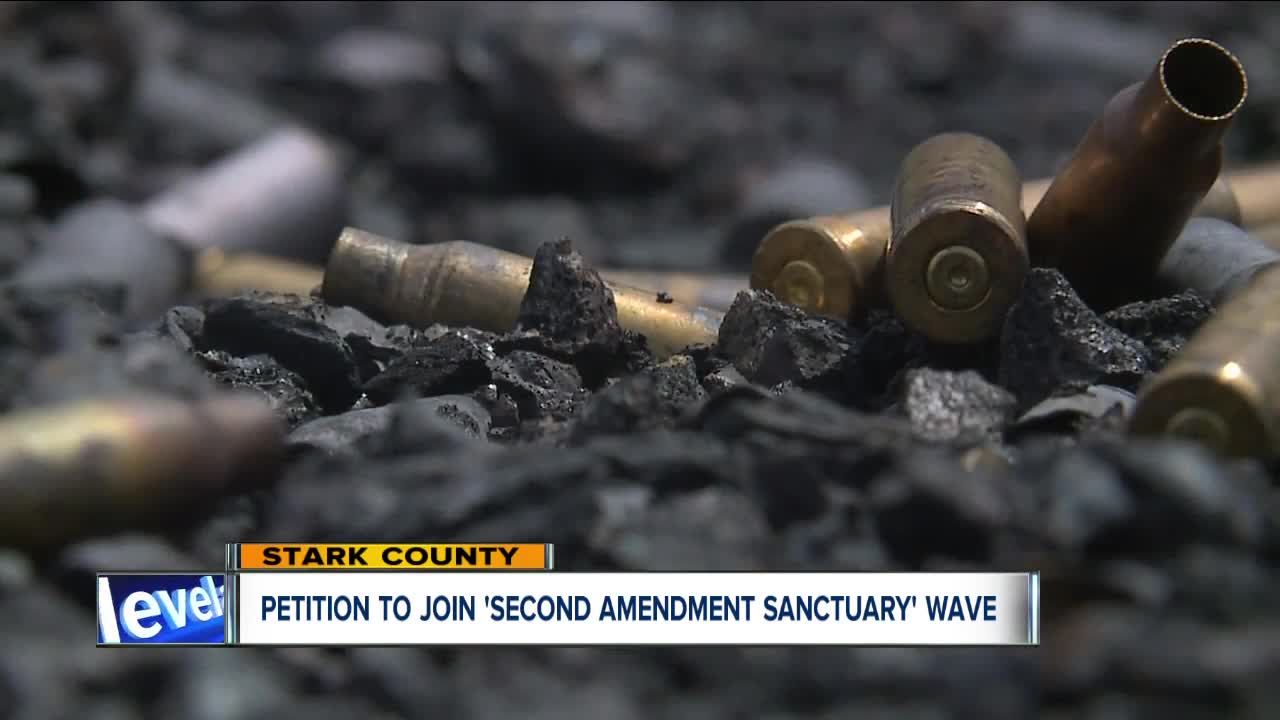 A new movement in Stark County aims to make the county a Second Amendment sanctuary.

A petition is circulating in Stark County, with the aim of getting 126,000 signatures so county officials could consider making Stark County a sanctuary in which no new gun laws would be enforced.

To Joseph Berlyak of Louisville, one of the people behind the movement in Stark County, the 13 most important words in the U.S. Constitution are “a well-regulated militia, being necessary to the security of a free state."

Berlyak said the sanctuary would not affect existing gun laws, only new gun laws. He said he wants “red flag” laws to stay out of the county and believes there are already plenty of gun laws on the books.

'If you have a drug felony, you have domestic violence on your record, you’re mentally incapacitated, per se, you’re not allowed to have a firearm,” Berlyak said.

Greg Broadwater, the other man involved in this push in Stark County, said he’s passionate about the Second Amendment and that this is something he’s wanted to do for a long time.

"And with everything that happened in Virginia, I decided this was the time, this needed to be said,” Broadwater said.

Dozens of counties and cities in Virginia have declared themselves Second Amendment sanctuaries, vowing to oppose new gun control measures. The Virginia Attorney General said in December that the sanctuaries have “no legal effect.”

Still, Berlyak and Broadwater said their measure has gotten a lot of support in Stark County.

“I went to the gas station today and before I could pay for a cup of coffee, I had six signatures on one that was laying on the table,” Broadwater said.

While Governor Mike DeWine decided not to ask the legislature to pursue a red flag law last fall, the men said they’re concerned about new laws that could be considered.

“If these bills are even being written, that should scare the hell out of you,” Broadwater said. “Just that they’re writing them and thinking that they can pass."

The Ohio Coalition Against Gun Violence emailed a statement in response to hearing about the push to make Stark County a Second Amendment Sanctuary, in which founder Toby Hoover wrote:

The Ohio Coalition Against Gun Violence is disappointed and concerned about some of the people in Stark County wanting to make their county a Second Amendment Sanctuary. It appears that the same people that claim that they are the most law abiding Ohioans are only that as long as it does not involve their guns and if it does they intend to break the law.

Both Berlyak and Broadwater said they are not concerned about legal challenges if this were to happen in Stark County.

"I’m not worried about it at all,” Broadwater said. “I think it’s time that this community starts to have a voice, and it needs to have a loud voice."

The men said there is no deadline to reach the number of signatures for their petition.