Akron's Bounce Innovation Hub, which has attracted about 50 software and biotech companies since it launched one year ago, is focusing on a new initiative to help startups build and launch their products.

AKRON, Ohio — Akron's Bounce Innovation Hub, which has attracted about 50 software and biotech companies since it launched one year ago, is focusing on a new initiative to help startups build and launch their products.

On Friday, entrepreneurs from four new companies practiced their pitches and got advice from mentors in the "accelerator" located on the fifth floor of the building on South Main Street.

Among them was Erika Woodrum, the owner of SeeLife, an underwater adventure video game that helps kids learn how to control their heart rates while playing.

"If the child's heart rate goes up, the Fitbit detects it. The game gets darker. The fish gets sad, playing on the empathy of kids and the game gets strategically more difficult," Woodrum said.

Woodrum is raising money to support her company and hopes to sell her gamification product to schools in Northeast Ohio by the end of the year.

"I don't think SeeLife could get to where it's going or get where it is without the network that has been provided by the Bounce accelerator," she said. 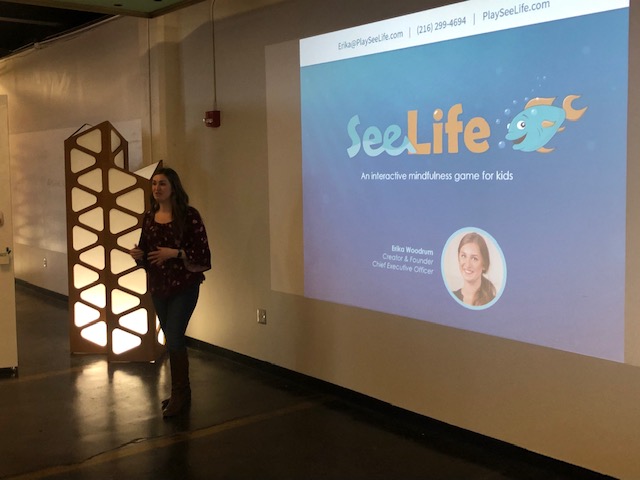 Bounce CEO Doug Weintraub said once startups graduate from the accelerator, the companies can move into the hub or establish their businesses at other locations.

The product development accelerator cohort lasts three months and then fresh startups can move in.

"It's a constant flow of companies," Weintraub said.

"We've created about 50 jobs in the various companies," Weintraub said. "It's something unique for Akron. I think Akron really hasn't had a chance to show off their companies both large and small and we think from a startup perspective, this is the place."

The other startups are Event Discovery Company, which makes event promoting easier, Linear Labs, which uses artificial intelligence to produce market research and consumer insight and ReqPrep, a company that streamlines the ordering process for users in lab industries.