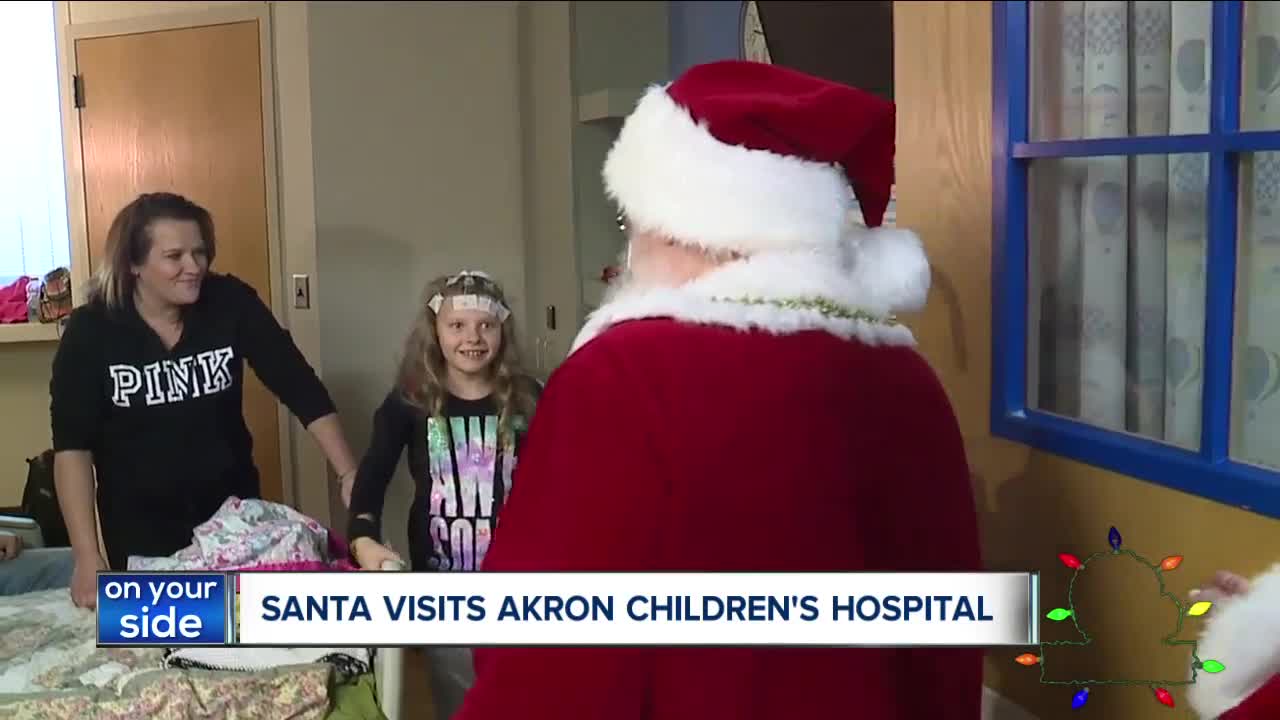 In the middle of Santa’s trip around the world delivering presents, he made a visit to children at Akron Children’s Hospital on Christmas Eve morning. 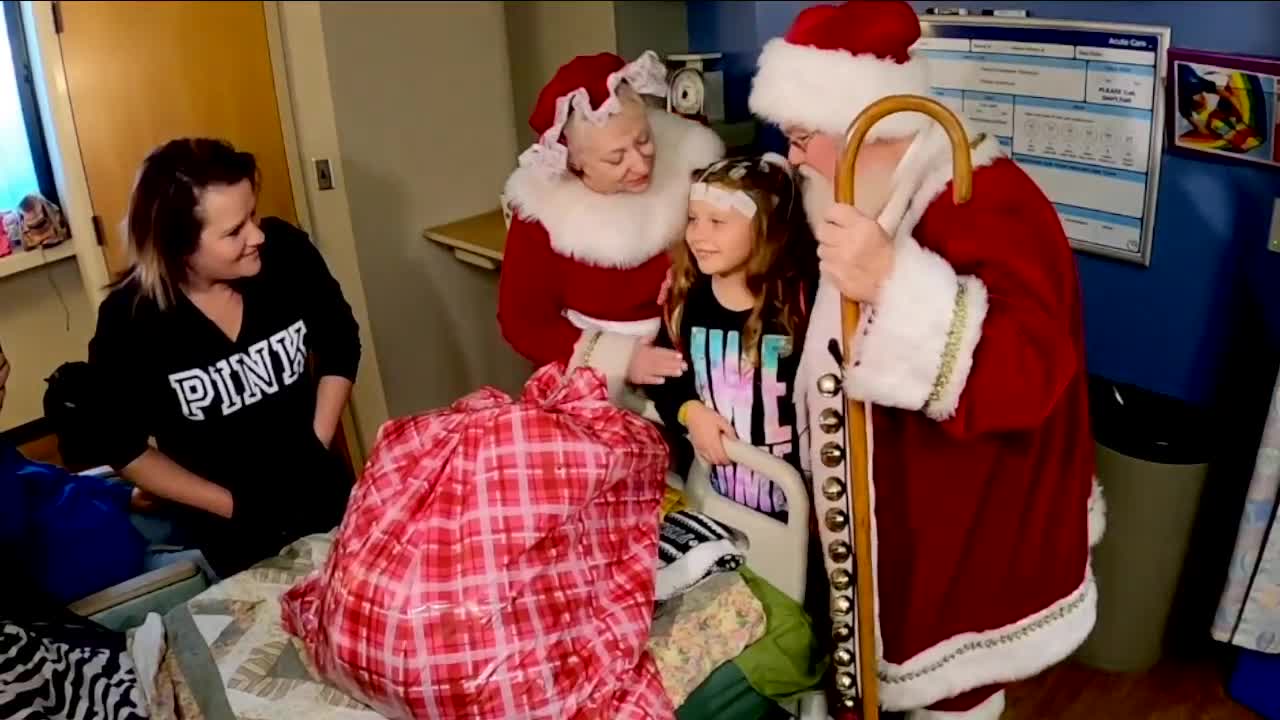 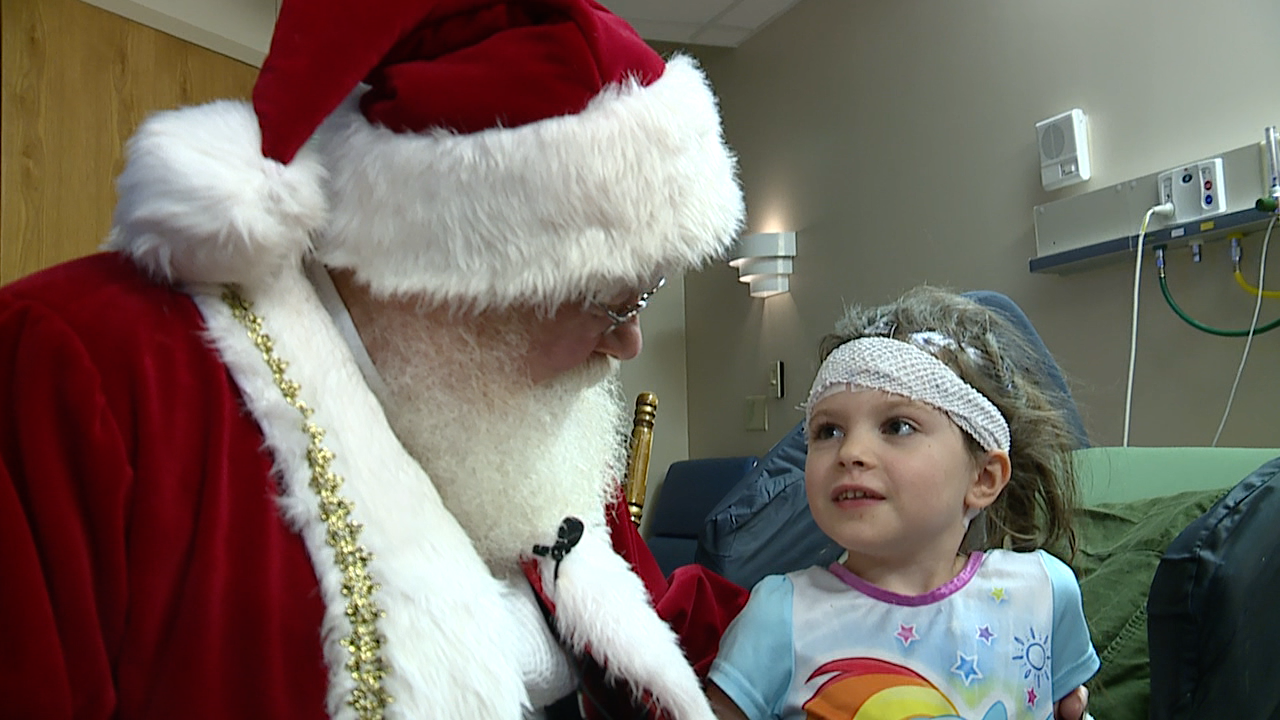 AKRON, Ohio — In the middle of Santa’s trip around the world delivering presents, he made a visit to children at Akron Children’s Hospital on Christmas Eve morning.

Santa was supposed to fly in on a helicopter, but foggy weather in Akron meant his sleigh was grounded. An ambulance carried Santa and Mrs. Claus to the main entrance, where they greeted children with hugs and hellos.

“Oh, it’s horrible up there, it’s horrible,” Santa said of the foggy conditions. “They said, ‘Nope, you can’t get the fat man up above today, so we’re gonna drive you in.’”

Upstairs, in the atrium, carolers serenaded the families waiting to see Santa before he made his way to patient rooms to drop off presents for 200 kids.

For one of those children, Cyril, it’s his second Christmas at the hospital.

“I was really hoping he would be able to be home this Christmas,” Mallory Evans, Cyril’s mother, said.

Evans said Cyril was born just before Christmas last year at 31 weeks and spent time in the NICU. He hasn’t been home since then, due to a syndrome called uniparental disomy 14. He received two chromosomes from his father on chromosome 14 and none from his mother.

The syndrome, Evans said, “causes a bell-shaped ribcage, which doesn’t allow him to get the lung volume that a typical child would get.”

Cyril has been on a ventilator his whole life and will need 24/7 care when he finally goes home.

“We hope that he’ll be able to go home early next year,” Evans said. “We’re not sure yet.”

The family makes the best of it, but it can be especially tough for Cyril’s older brother, Lyle, who is three and a half years old.

“I think it’s been a hard year for [Lyle],” Evans said. “He went from being the center of attention, now he’s a big brother. He loves his little brother so much. He calls him ‘my baby.’”

Evans said each year since Lyle was a baby, they’ve taken him to see Santa, but this year, Santa came to him at the hospital.

“It’s really good that, even though Cyril’s been here and we haven’t taken him to see Santa, that Santa came to him,” Evans said.

Santa and Mrs. Claus had to don gowns and masks to enter Cyril’s room, prompting Lyle to tell Santa, “You look like a nurse!”

Even though Cyril has to stay in the hospital for the holidays, his family is hoping things will be different soon.

“He’s been taken care of very well, but we do wish he could be home,” Evans said. “We really look forward to that.”