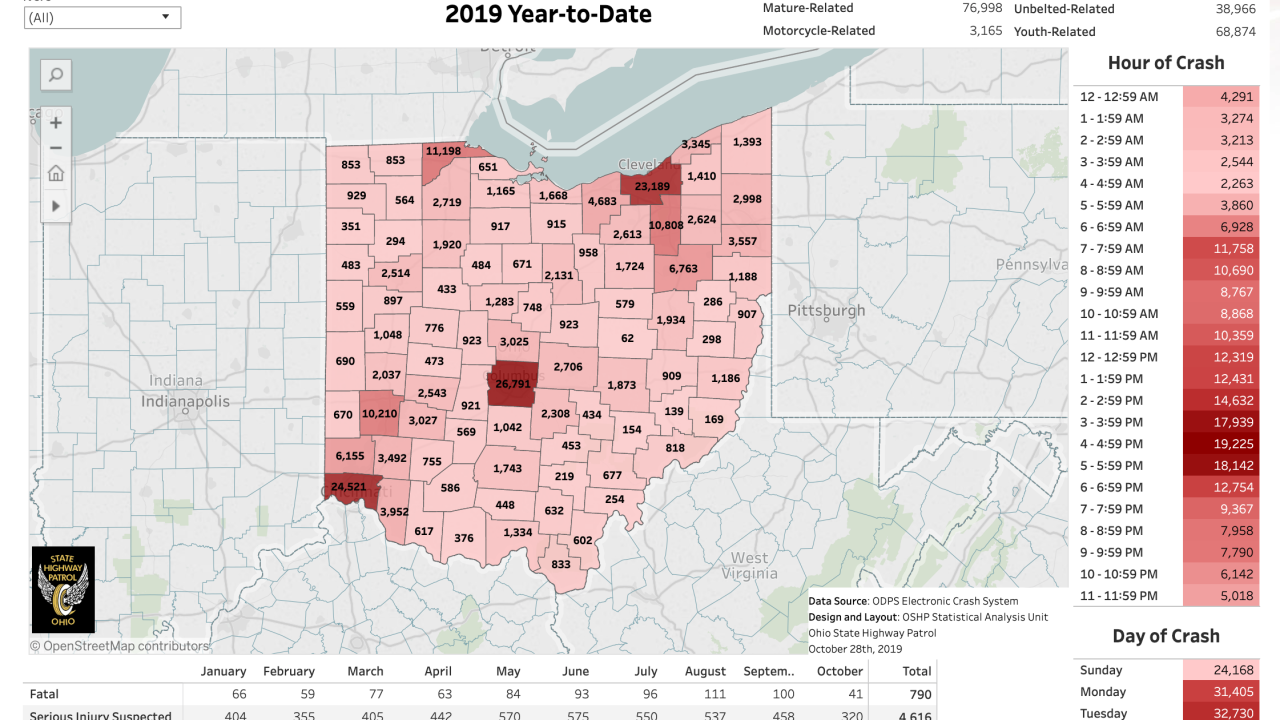 CLEVELAND — Statistics from the Ohio State Highway Patrol show that you are more likely to be involved in a crash in Cuyahoga County than any other of its neighboring counties.

Those statistics are from a new database OSHP put online, giving the public access to crash data gathered from all confirmed crash reports from every agency dating to 2014.

While a bunch of numbers relating to crashes doesn't seem interesting at first, the data allows law enforcement or even the public the ability to analyze the data for specific crash trends.

Map users can sort through the data county-by-county or by the severity of the crashes reported—giving the viewer a way to look at specific information such as times, days or types of crashes that have occurred.

OSHP broke down the crash data into several categories available to view. They are:

In Cuyahoga County alone, you're more likely to be involved in a crash on a Friday between 4 and 4:59 p.m. than any other day or time of the week. Numbers show that overall, the highest number of crashes happened during both morning and afternoon rush hours.

Crash statistics show there have been 23,189 crashes in Cuyahoga County between Jan. 1 and Oct. 28.

To put this in perspective, year to date numbers show neighboring counties have significantly fewer crashes.

Fatal crashes in Cuyahoga County occurred at a rate three times higher than Summit County, which had the second-highest number of crashes of any county neighboring Cuyahoga County.

Out of the 23,189 crashes in Cuyahoga County, 8,632 of them involved motorists over 55 years old. On the other hand, the number of crashes involving younger individuals between ages 15 and 24 years old was 6,612.

The only category where Cuyahoga County didn't have the highest crash rate compared to a neighboring counties was in deer-related crashes.

According to OSHP, the database will be updated weekly.

There's a multitude of uses for the database, with the most obvious being that law enforcement can quickly see areas in their jurisdictions where crashes happen and additional patrols are necessary. It also serves as a landing point or a catch-all website that any person or any agency needing up to date information can use to comb through crash data for any location in the state.

RELATED: Cuyahoga County ranks third-highest in the state for the pedestrian-related crashes