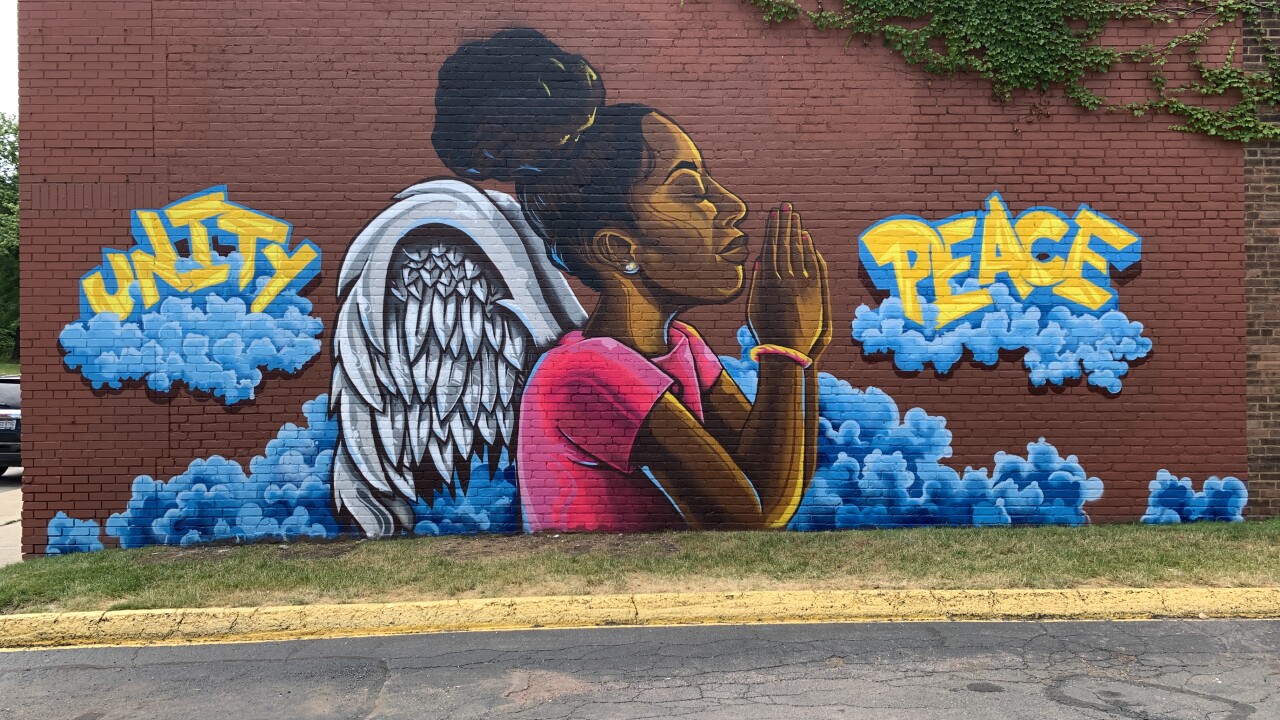 Photos courtesy of Kevin Harp.
"Revolutionary Prayers" spreads out across the side of CHEERS Bar and Restaurant in Cleveland's Union Miles neighborhood.

CLEVELAND — When it comes to forms of protesting, some join a cause and let their voices be heard in the streets, while others sign a petition or volunteer. For Kevin Harp, who's known in the community as “Mister Soul,” he creates. So much so that it's likely you've seen his work.

His latest mural has been a year in the making, long before the death of George Floyd sparked nationwide demonstrations protesting racial injustice and police violence. The message of the mural titled “Revolutionary Prayers” doesn’t speak to a particular movement, nor was it meant to, but rather its intent is to promote unity and hope for the Union-Miles community.

Referencing an Andre 3000 quote he lives by, "Prayer is the tightest game that you can have," Mister Soul said the community needs peace and hope and that this mural is a way to honor the lives of those lost on East 93rd Street.

"In essence this [quote] means that whatever you're going through, whatever is going on, prayer is always the centermost tool of expression, to a higher power, to you know, to conjure up energy and to be able to accomplish whatever it is that you are trying to accomplish," he said while giving his paint-stained hands a break.

The mural, which colorfully graces the bricks of the Cheers Bar and Restaurant on East 93rd Street, instantly grabs one's attention.

Mister Soul said in the several days it took him to complete the mural, people rode up on their bikes offering encouragement, beeped their car horns and took out their phones to capture the beauty in their own backyard.

He said this mural was created for a community that has suffered from blight, poverty, lack of investment and the lives lost by senseless violence, like 14-year-old Alianna DeFreeze, who was on her way to school when she lured away from a bus stop by a convicted sex offender and later found dead inside an abandoned home.

The creation of a mural like this one isn’t as simple as a stroke of a paintbrush. It can be a long process that relies on obtaining resources and funding to make it happen, which is why when Executive Director of the Union Miles Development Corporation Roshawn Sample received the funding, it was another step towards adding value to the community through public art.

“We want our residents to have pride and be proud of where they live work and play. Murals bring vibrancy to neighborhoods and attract young people. We are also thankful for business owners like Cheers for allowing us to place the mural on their property, that’s what partnership is all about,” she said.

Harp earned a name for himself in Atlanta working with an impressive client list including Beats By Dre, Sleepy Brown, Serena Williams and others, but anytime Mister Soul can make art in his community and neighborhood, it’s personal and that much more meaningful.

“Being from the community, I know what we're going through. I know what we like to see in the imagery or artwork that represents the plight and struggles of the community. So, I just put that into artwork, and having a canvas like this gives me an opportunity to be able to connect with the community," he said.