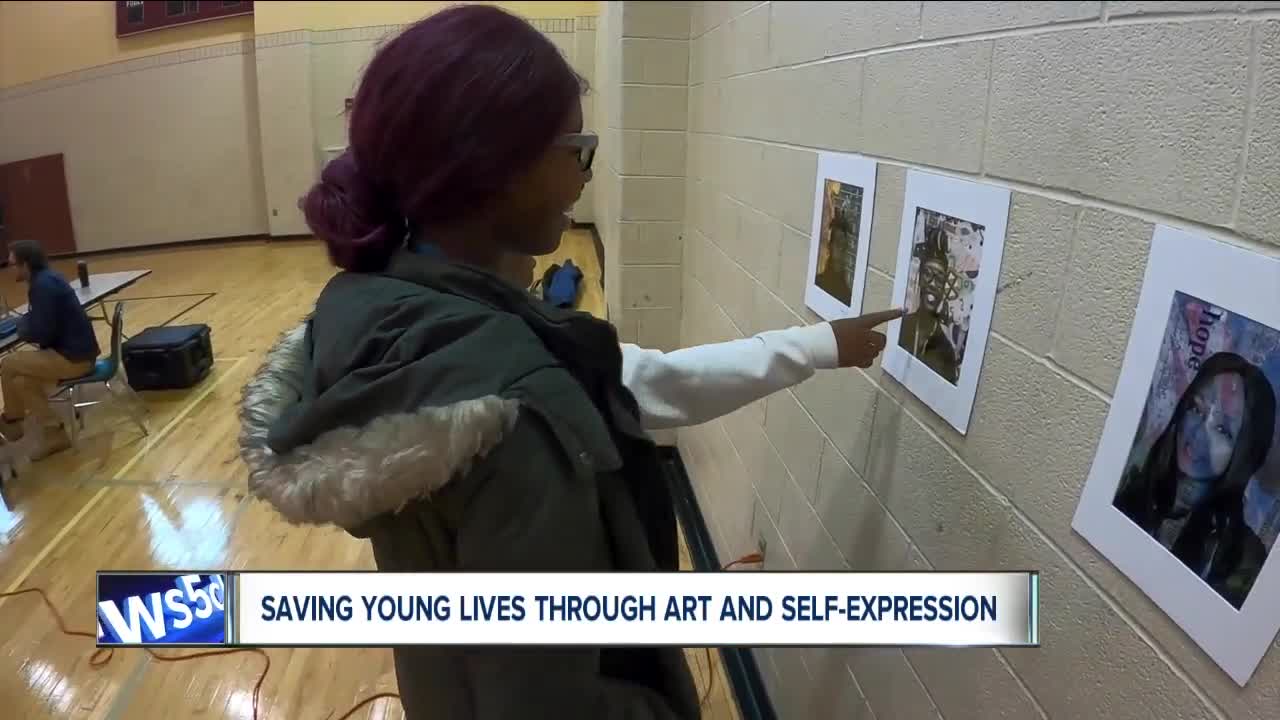 A program in Cleveland is fighting back against toxic stress and trying to improve the mental health of students. 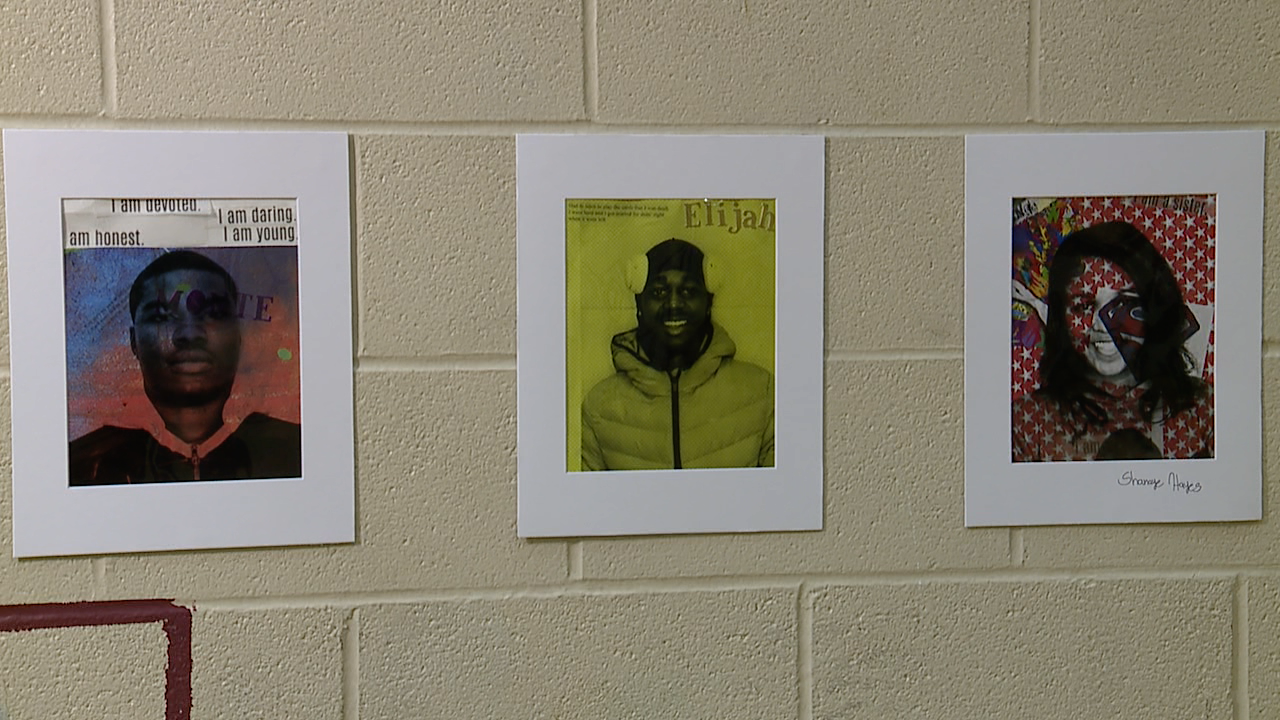 CLEVELAND — A program in Cleveland is fighting back against toxic stress and trying to improve the mental health of students.

At John Adams High School, students are learning about mental wellness through art through the SAFE Project, which stands for “Students Are Free to Express.” The program, a MetroHealth initiative, currently serves sophomores, juniors and seniors at the school.

During a weeks-long residency program, the students created self portraits and learned about dance and movement. Seniors in the program focused on expressing their identities, and many of them attended a showcase on Thursday morning in the school’s small gym.

Standing near his own self portrait, senior Keno Page reflected on what he included in his artwork.

“My name [is] Keno, but like, a lot of people call me Ken and I play football for John Adams High School,” Page said. “I just put everything in the portrait that basically is me.”

Page also participated in recording a song for his peers for the showcase, the lyrics of which were compiled from students’ writing. He said he hoped it inspired his peers and helped them feel less stressed.

Page said that he considers himself a happy person and hasn’t dealt with any mental health struggles, but he knows that other people do.

“If I see any friends that I know, I kinda like pull them to the side and I talk to them,” Page said. “For me, if I’m feeling down, I do something that’ll make me feel better. Like I’m an athlete, so I’ll go to the gym and I’ll do anything. So I try to get them like reasons to go do something so they can feel a little better about themselves, because I feel like if you [are] doing something productive then it’s like, that’s going to take your mind off what you got going on [that’s] personal.”

He encouraged his friends and classmates to be themselves.

“Be you and be fun and be free,” Page said. “Don’t let nothing stop you. Continue to do what you want to do and just be great.”

“We hear a lot about mental health,” said Dr. Lisa Ramirez, director of community and behavioral health for MetroHealth’s School Health Program. “There is a lot of coverage recently with the increase in suicides, depression, toxic stress, and I do feel it’s really important to have an awareness that those things impact our children.”

RELATED: Suicide is now the leading cause of death for children ages 10 to 14 in Ohio

Ramirez said focusing on mental wellness was important and said this program is focused on prevention and letting students know stress can be normal.

She said research shows it’s helpful to have “a coping mechanism like art, where they’re not focused on the negative but really focused on empowering themselves, on the good things about being who they are that can give them an opportunity to not really think about all the bad things have happened in their lives or the stressful things that are going on, but really the exciting opportunities that they have as an 11th and 12th grader graduating and all the exciting things that they can do.”

Ramirez said students are sometimes skeptical at first or even uncomfortable with the program, but eventually, she said, most students enjoy it.

“I think they surprise themselves at sometimes what they see of themselves in the art and also what the art elicits from them,” Ramirez said.

Right now, the program is at John Adams and Lincoln-West, but Ramirez said they’ve also expanded to serve pre-K, kindergarten and first grade students at Harvey Rice, with a goal of eventually serving all pre-K through 12th graders in the Cleveland Metropolitan School District.

“In high school, we’re doing a lot more reaction,” Ramirez said. “We’re really trying to respond to the stress, the depression, the anxiety, the suicidality which is because of that toxic stress, that despair, hopelessness. When we get them in pre-K, kindergarten and first grade, it’s a whole different experience."

She described the program for younger children as “almost like vaccinating against stress” proactively.

“I think it’s really important for people to understand that to combat something as complicated as suicidality and toxic stress, that everybody in the community needs to be involved and engaged,” Ramirez said. “Everybody can do something, and so whether it’s doing art or whatever it is that you can do, help our children understand that they are really important and very valued.”

As a company member and assistant to the artistic director at Inlet Dance Theatre, Dominic Moore-Dunson also serves as a teaching artist for the SAFE Project, teaching students about dance.

He and the theatre kicked off the residency program for these students, bringing a movement workshop to the kids based on his show, The Black Card Project, an autobiographical piece that revolves around a young homeschooled black boy whose mother is concerned about his “lack of awareness of his cultural identity.”

Moore-Dunson said that idea helped him guide the students toward the idea of identity, specifically black identity, and dance helps them communicate non-verbally.

“For them to get a chance to express themselves like they did today and doing these little small movement games that are really, really fun, they’re not using language to talk to each other, they’re using movement,” Moore-Dunson said. “And the amount of joy that we all saw on their faces immediately is what you want out of high school kids. You want them to have that joy of moving because it’s another facet of communication that not all kids get every day, so the ability to have that as well as the other types of arts that are coming in this program just gives the entire program [SAFE Project] a whole 360 range of wellness in all wholesome ways.”

He hoped these students would take these lessons with them when they graduate and move on to the next chapter.

“The idea that identity is something that you have full control over, in terms of how you present yourself to the world and how you take others into yourself and how you portray the world and how you see it, and that identity isn’t this concrete thing that can’t evolve and that can’t change,” Moore-Dunson said. “As the facts change, so does your opinion, therefore so does your identity and your character, and that’s allowed to happen.”