Some local leaders and educators are sharing their concerns about Ohio's school vaccination plan, as local school districts get prepared to inoculate thousands of employees against COVID-19 in the coming weeks.

CLEVELAND — Some local leaders and educators are sharing their concerns about Ohio's school vaccination plan, as local school districts get prepared to inoculate thousands of employees against COVID-19 in the coming weeks.

“These are the people who have been holding down the front-line, and I felt a little insulted that we weren't given our recognition," Hamm said.

“We’re essential workers, we’ve been going to work every day for the last eleven months afraid to die.”

“People were shocked that early childhood was not included in phase 1B," Robins said.

“I’m glad that question was bought up and the Governor is thinking through that."

Meanwhile, local school districts who are on the list, like the Akron Public Schools, report they are getting prepared.

However, district Communications Director Mark Williamson told News 5 information from the state keeps changing, and they aren't being given nearly enough vaccine doses to inoculate the 3,000 employees who want the first shot.

"We’re only receiving 780 doses next week and we’re not sure what days that’s going to be," Williamson said.

“If it takes a long time to deliver the first dose, that’s going to back everything up on the other end.”

"Our need is for 3,000 for each of two in the series of inoculations to be given. This falls roughly 2,200 short of what we need."

"Our hope is more will be arriving shortly after the first delivery so we can get our teachers and staff inoculated as quickly as possible. There is a four week period between doses."

"Logistics are being worked out now for getting these 780 doses to our employees."

Williamson said it could be difficult to meet DeWine's date on when he wants all districts to be back to all in-classroom learning.

“I don’t think March 1 is realistic for us, just given what we’re looking at right now," Williamson said.

“We never know, because we get news and it changes, or it isn’t what we were told.”

Sen. Nickie Antonio, Ohio District 23 (D-Lakewood), told News 5 she understands the vaccine supply issues being faced by the state but believes a more detailed education plan is needed to more specifically address educators who are at the highest risk of getting the virus.

“I’m not seeing a very thoughtful system of how we’re distributing the vaccine, to begin with," Antonio said.

"It shines the spotlight on just how failed the system really is.”

“Obviously more vaccine, but coupled with that you have to have an education plan.”

“It boggles my mind that we haven’t done a better job all the way through this.” 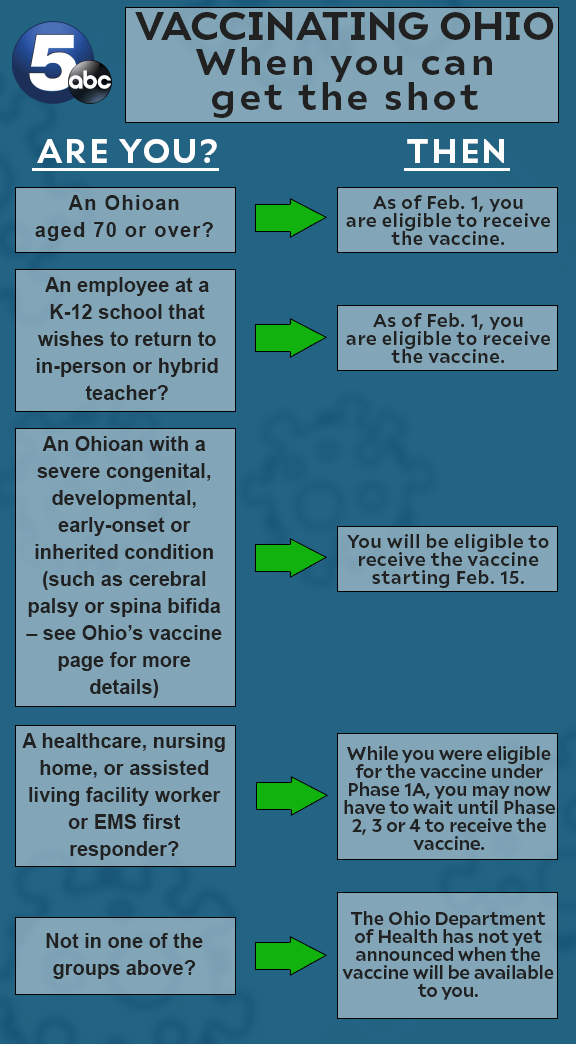