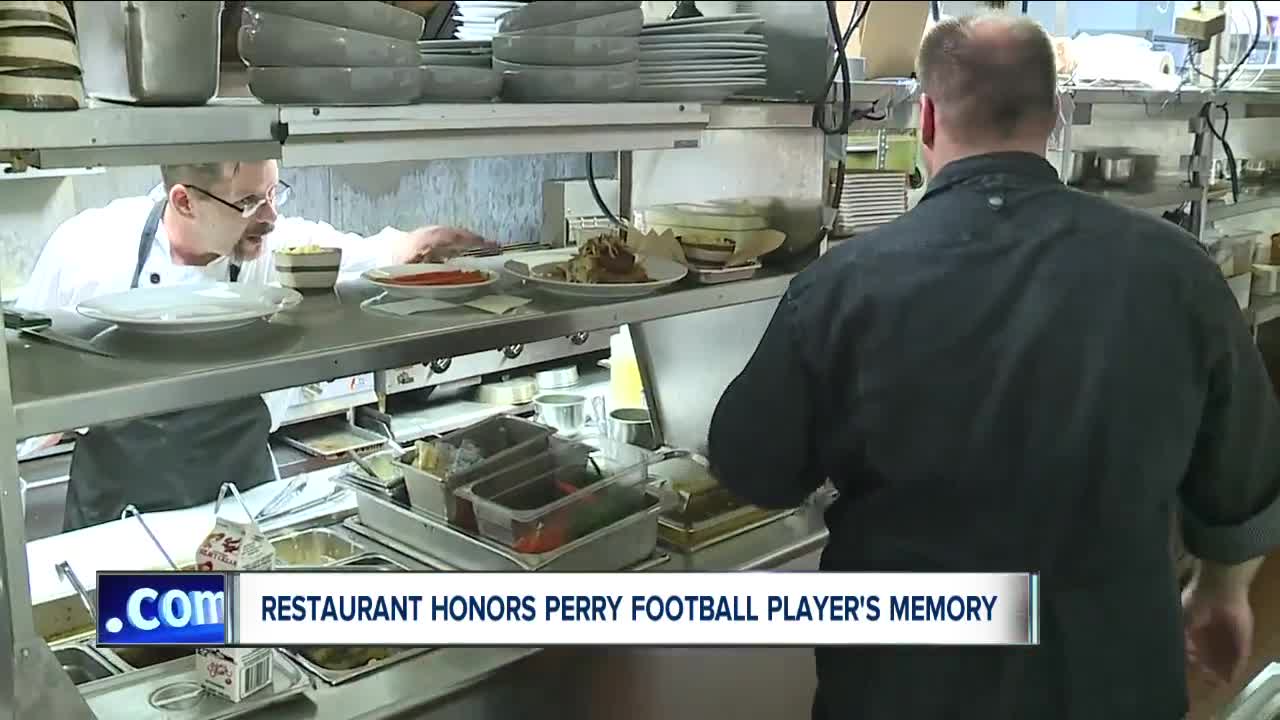 A new restaurant has opened in Tuscarawas County in the village of Zoar, named after the owners’ teenage son, who passed away in May. ZOAR, Ohio — A new restaurant has opened in Tuscarawas County in the village of Zoar, named after the owners’ teenage son, who passed away in May.

The restaurant was Donovan Kelly’s dream.

“He wanted this more than I did,” said his father, Nathan Kelly. “Obviously, your dream as a chef is to have your own place, but he’d always be like, ‘Dad, you need to open a restaurant.’”

Nathan Kelly had mostly worked at resorts and country clubs as a chef. Donovan, or Donnie, as his family called him, spent a lot of Saturdays at work with his dad.

His wife, Maggie, chimed in, “Outgoing.”

“Outgoing, helpful,” Nathan agreed. “He was always about family and friends and stuff like that.”

Donnie played for Perry High School’s football team. The 16-year-old sophomore had been playing football since he was young. He was athletically gifted, “starting to garner a little bit of [Division I] college football notice,” at 6 foot 3 and running a 4.9, his father said.

But on the last day of school in May 2019, driving home from school with his brother, something went wrong.

“His brother called and said, ‘Something’s going on with Donnie, he’s not acting right. Looks like he’s having a seizure,’” Maggie said.

Maggie, who is a nurse, called 911. When the boys got to the house, Maggie tried to get a response from Donnie and started CPR before the ambulance came.

“Unfortunately, we just never got him back,” Maggie said.

“It’s very hard. Very unexpected,” Maggie said. “I just thought he was having a seizure. I never thought that day would’ve ended the way that it ended.”

When autopsy results came back in October, Donnie’s family learned he had a rare genetic cardiomyopathy.

“And unfortunately there’s no test for it. There’s no way they could tell you have it” without multiple symptoms, according to Nathan, who learned he had it too when he got sick a few months later.

“He just never expressed any concerns, which I feel that I would have keyed into, had he said anything,” Maggie said. “But he never complained, he wasn’t a complainer, so it was even more shocking when all that happened.”

In the months after Donnie’s death, Nathan and Maggie decided to take a leap, buying a building in Zoar and opening Donnie’s Tavern right after Christmas.

Steps inside the door, it’s clear Donnie would have loved the place. His football jersey hangs in the lobby, along with a dollar bill. Nathan said one of Donnie’s classmates gave him the dollar bill when the restaurant opened, telling him Donnie had given her the money at lunch when she was short. The dollar bill, she said, was the same one he had given her, and she wanted Nathan to have it.

The menu is all Donnie, too.

“We honestly just took all his favorite foods and, ‘OK, how do we build a menu around all these foods?’” Nathan said.

The menu includes chicken wings and homemade meatballs, which were among Donnie’s favorites.

Nathan and Maggie said their outgoing teenager probably would have been the host.

“There’s times you just sit back and think why we did all this and just wish he could be here to see it because he really would, he would love it,” Maggie said.

With four other kids, including twins who are two and a half years old, the restaurant keeps the Kellys even busier than they already were. But as they deal with the unexpected death of their son, running this restaurant feels important.

“The little ones, they need us to get up every day,” Maggie said. “So it was hard. Not sure where we would’ve been without them, but this has definitely given us a goal to work for.”

The Kellys expect to get their liquor license for Donnie’s on February 1, but even without it, they said they’ve been busy since opening on December 28.

Nathan said they hope to open a second restaurant, an upscale farm-to-table place called Donovan’s, in the same building by summertime.