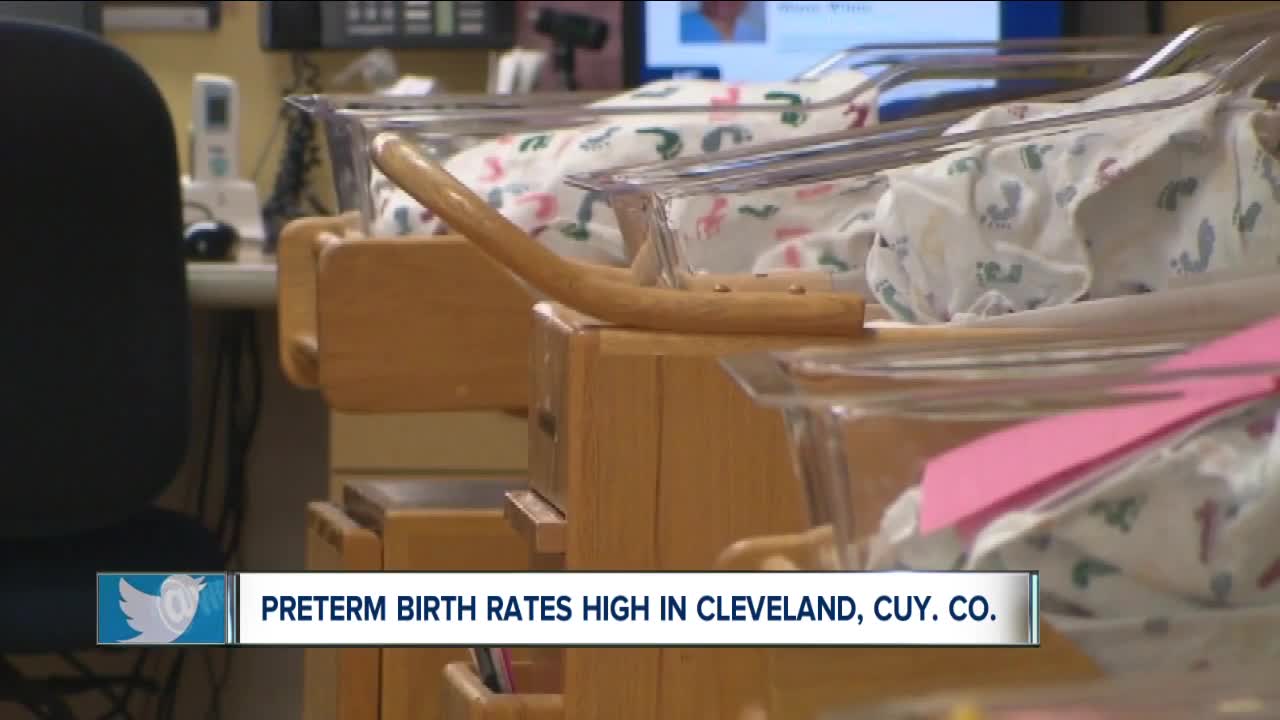 The March of Dimes released its 2019 report card on maternal and infant health on Monday, and while Ohio received a C- for its preterm birth rate, Cuyahoga County and the city of Cleveland fared worse. 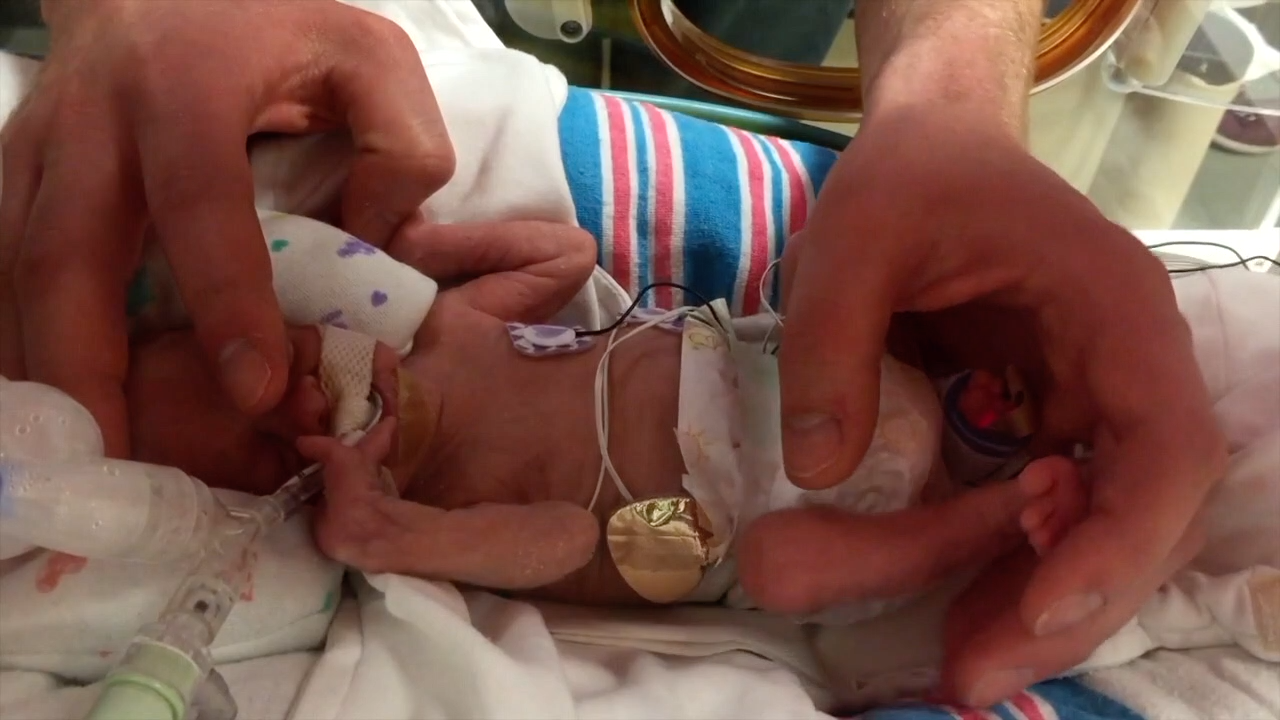 CUYAHOGA COUNTY — The March of Dimes released its 2019 report card on maternal and infant health on Monday, and while Ohio received a C- for its preterm birth rate, Cuyahoga County and the city of Cleveland fared worse.

The county earned a grade of F for its preterm birth rate, as did the city of Cleveland. According to the report card, 14.5% of babies born in Cleveland are premature, or more than three weeks early.

Local organizations, from the Cuyahoga County Board of Health to First Year Cleveland and others, are working to bring those rates down.

First Year Cleveland, founded in December 2015, said infant mortality rates have declined in Cuyahoga County since its founding. However, the March of Dimes report card, which First Year Cleveland said is based on 2017 data, is a reminder that there is still a lot of work to be done.

“These rates should alarm all of us,” Bernadette Kerrigan, executive director of First Year Cleveland, said. “It means our community is not making our most precious children and moms a top priority.”

Kerrigan described the process of lowering preterm birth rates as “a marathon, not a sprint.” She said the organization had increased home visiting and doubled the number of parents that have visitors in their homes for wraparound services. Additionally, there’s an increased focus on group prenatal care.

However, she said, parents and providers are also beginning to talk about racism and how it affects preterm births and infant mortality, especially since African American babies are more likely to be born early than babies of other races.

“That is all African-American families, no matter what your education or income,” Kerrigan said.

Ideally, Kerrigan said, First Year Cleveland wants to reduce preterm birth rates to 10% in the next two years, meriting a C grade from the March of Dimes, and then hopes to make even more progress in the next four or five years.

Why babies are born premature

Dr. Arthur James, an OB/GYN and pediatrician, is a consultant for First Year Cleveland. He said preterm birth is the number one cause of babies not surviving to their first birthday.

“Prematurity is complicated, in that we don’t know the real cause for why women deliver prematurely,” James said.

“Access to care, providing quality prenatal care are very important to us,” James said. “But beyond what we provide in terms of clinical care, it’s very important for us to address the social determinants of care. So the quality of people’s lives in general significantly influenced the outcomes we experience and health overall, particularly where infant mortality is concerned.”

Out of all 50 states, only the state of Oregon received an A grade on the March of Dimes report card. James said Ohio did not have dramatically worse rates of preterm birth than the rest of the nation, though Cuyahoga County did.

“The bad news about that, of course, is that we’re much worse,” James said. “But the good news is that we know other places have been able to achieve significantly better rates, so we can get there as well.”

Juelissa Moore is the proud mother of four-month-old, Kairo Mullen.

“He’s just a butterball, obviously he loves to eat,” Moore said. “He loves to play, he loves jazz music and he loves bathtime.”

She spoke with News 5 on Monday before attending a group session at University Hospitals Rainbow Center for Women & Children.

Moore said she was able to get resources from UH’s program CenteringPregnancy while she was pregnant with Kairo. The program gives group prenatal support to women.

“I really loved it because I’m the only one in my friend group right now that’s pregnant,” Moore said. “I’m only 19, so to have people around that are my age, due at the same time that I’m due, having the same problems that I have or concerns or questions, it was really heartwarming to be around them and understand that I wasn’t alone. I was going through it together with everybody else.”

Moore said the group provided her with resources while pregnant but also for after she gave birth, including numbers for lactation consultants and a list of pediatricians. She said the support network and familiar faces helped her during her pregnancy.

Now that she has a four-month-old, she attends group meetings once a month or every two months and still relies on lactation consultants because she is nursing. She said the group also focuses on her mental health.

“Am I depressed, do I have anxiety?” Moore said. “They always ask. ‘How’s the mom doing, how are the parents?’”

The health of mothers and other factors

Angela Newman-White, a grant supervisor at the Cuyahoga County Board of Health, said the leading cause for prematurity is “mom’s health and her wellbeing prior to her even becoming pregnant.”

Newman-White said causes of premature death include poverty, congenital abnormalities and the health condition of the mother.

“We’ve been looking a lot and talking about stress and the impact of stress on the body and your ability to carry a child to term,” Newman-White said.

In Cuyahoga County, all across Ohio and in other communities, Newman-White said structural racism “plays a key factor in the ability for anyone to thrive in their community” and added that in Cuyahoga County, “our black women are more likely, regardless of their income level or education level, to have their baby early.”

She highlighted a three-pronged approach the county is taking to address prematurity. That includes ongoing data analysis and monitoring, prevention and intervention. For intervention, Newman-White said the Ohio Department of Health's Ohio Equity Institute is working with First Year Cleveland and other partners to link women to services and provide support throughout their pregnancies.

For prevention, Newman-White said, “we’re looking at ways that we can improve conditions where families live, work and play.”

The Board of Health also has programs and services that address food access and safe places to engage in physical activity.

However, Newman-White said since prematurity is affected by “historical implications of structural racism,” she believes it will take a long time to reduce rates to an acceptable level.

“This is not something that we can throw a program at, and so until we start to invest in communities, school systems, looking at the criminal justice system, access to jobs, I think we’re going to continue to see the rates the way that they are,” Newman-White said.