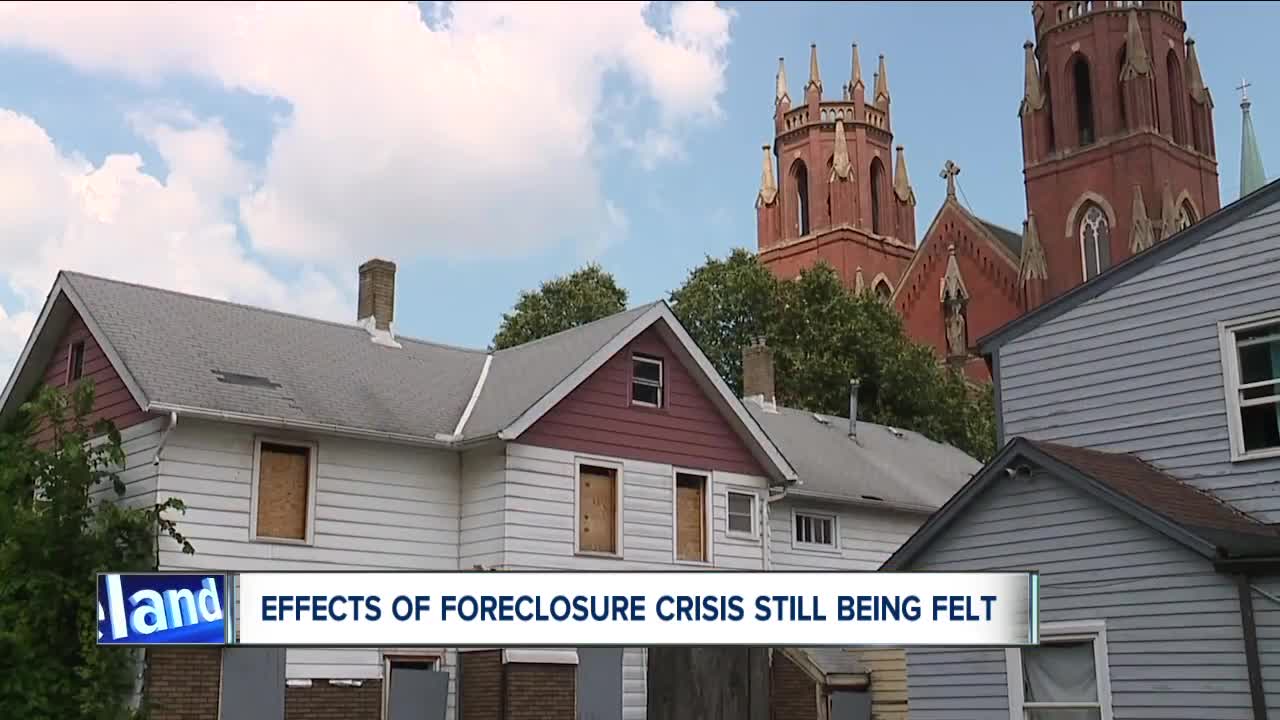 Years after the lending and foreclosure crisis ravaged parts of Cuyahoga County, a new report shows some areas of the county still haven't fully recovered. 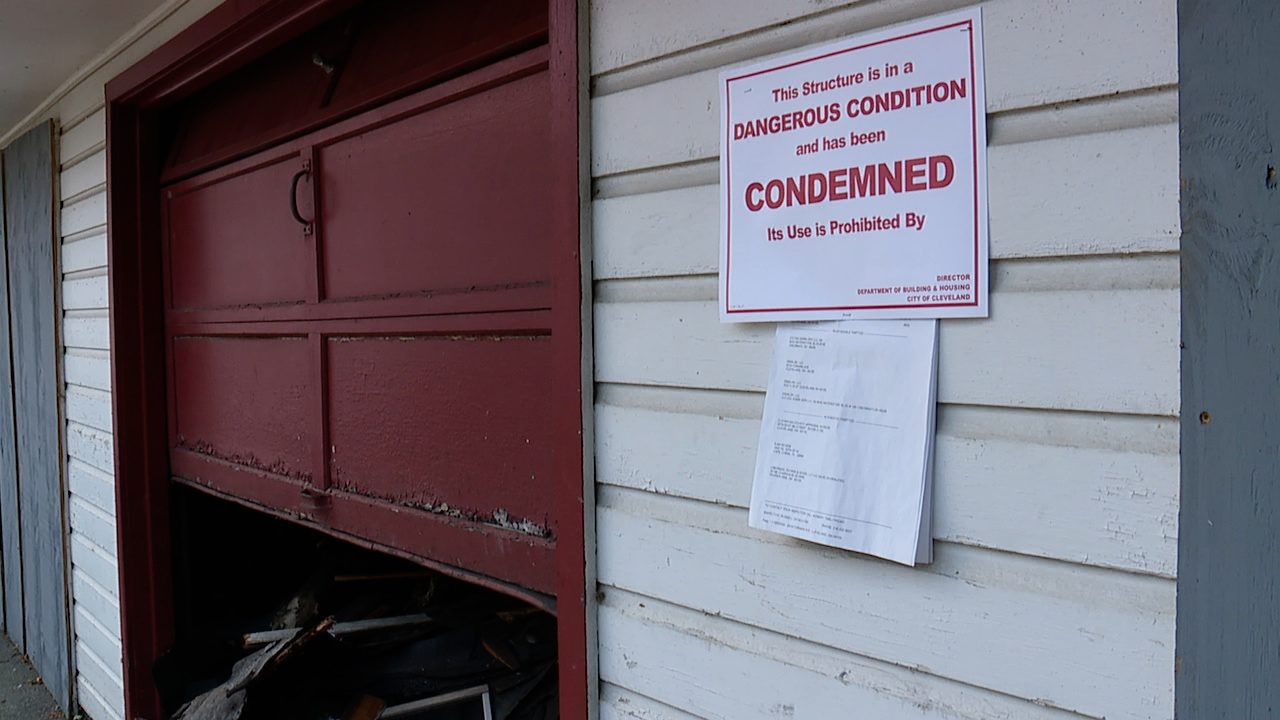 CLEVELAND — Years after the lending and foreclosure crisis ravaged parts of Cuyahoga County, a new report shows some areas of the county still haven't fully recovered.

The report by the Western Reserve Land Conservancy highlights both positive and negative housing trends in Cuyahoga County.

"On a 20,000-foot level, people were saying that the foreclosure crisis was behind us and everything is fine," said Frank Ford, senior policy advisor at the Western Reserve Land Conservancy, who authored the report.

Ford said for that reason, he's published this report for the last four years. It tracks progress in the county's housing recovery.

The good news, Ford said, is that home sale prices are up across the board. But on Cleveland's east side and in some of Cuyahoga County's eastern suburbs, progress hasn't kept pace with other areas, such as the outer suburbs and the western inner suburbs.

Predominantly, Ford said, "majority of African-American communities are the ones that are struggling to recover."

"The bulk of funding from U.S. Treasury will be depleted sometime in mid-2020. However, we will continue to do targeted and strategic demolitions where necessary, it will just be on a much smaller scale," Gus Frangos, president and general counsel for the Cuyahoga County Land Reutilization Corp. wrote in an email.

At that point, Frangos said, the lank bank "will continue to do our housing rehabilitation and land assemblage work. We have facilitated the rehab of over 1,900 homes along with the demolition activity. We will expand our role in affordable housing."

Ford said that there was hope the county and city would re-up their commitments, but that presently, there is no commitment of additional money from either source.

"And it’s not just that [funding is] running out in 2020," Ford said. "The land bank has already reached capacity and actually cannot take any more properties now that need demolition."

The county land bank has used demolitions as a tool to get rid of some of the most blighted properties, according to Tony Brancatelli, the Cleveland City Councilman for Ward 12 and chairman of the land bank. But the funding, which comes from the city of Cleveland and from the county, in addition to the federal government, is set to dry up in 2020, at which time 3,000 properties are still projected to need demolition. Three-quarters of those are on Cleveland's east side, according to Ford.

"These vacancies no longer can be restored," Brancatelli said of the properties that need to be demolished. "They’re ones that need a bulldozer instead of renovation."

"So we have moved the needle, we have made progress," Brancatelli said. "But that progress is going to come a halt in 2020 when we stop having those options that we had, and demolition won’t be as reliable as it was previously."

Doug Brooks, who lives across the street from St. Stanislaus Church on Forman Avenue, said he wished something more would be done about the two condemned properties on either side of his home.

"It’s just been a real serious eyesore," Brooks said. "When I have the windows open in my house, it’s super smelly. Both houses smell."

Brooks is thinking about selling his home, but he doesn't think he could get the price he wants.

That's a problem that's plaguing neighborhoods like Slavic Village, though there has been some progress, according to Brancatelli, with new houses and renovated houses. Still, some of the new construction was built with help from state tax credits, Brancatelli said.

"The state was very specific to say, 'We’ll give you the tax credit, but you have to tell us these properties that are neighboring that are bad properties will be demolished,'" Brancatelli said.

Ford expressed concern that, despite the momentum in Cleveland's east side neighborhoods, a lack of funding for demolition could result in a reversal of progress.

"The danger is that we could slide back if we aren’t able to find additional money to keep this progress going," Ford said.

Ford's report also highlighted other areas of concern, including a weakened Consumer Financial Protection Bureau at the federal level. He said that mortgage foreclosures are down to almost the levels they were in the mid-1990s, but that delinquencies, which precede foreclosures, didn't drop last year. Another area of concern is that African-Americans are denied mortgages more often than whites who apply for loans, and that's the case even for high-income blacks as compared to middle- or moderate-income whites.

"The report doesn’t go so far as to say it’s proving that there is discrimination," Ford said. "What it does say is that there is a disparate impact and a disparate outcome and we should really try to pay attention to that."

Overall, though, Ford expressed that there are solutions to some of these problems. In neighborhoods such as Slavic Village, where loan officers paid on commission might have little incentive to give someone a $50,000 loan, banks could incentivize loan officers to do work in those communities. He also suggested that banks could waive fees on loans of that size.

Brancatelli said that there were people "shaking the trees and trying to find additional dollars" to find a way to continue funding demolitions.

"We are continuing to chase because we are kind of frantic at looking at 2020 and what that could mean negatively and even a worse impact on the east side," Brancatelli said.