Copyright 2018 Scripps Media, Inc. All rights reserved. This material may not be published, broadcast, rewritten, or redistributed.
Stephen Bivens
<p>The Praxis Natural Dye Garden is located on a vacant lot at the corner of  Crosica Avenue and E. 156th Street.</p>
By: Kaylyn Hlavaty
Posted at 12:52 PM, Sep 27, 2018

In neighborhoods across Cleveland, vacant, overgrown lots undergo a transformation for fruits and veggies to take root, but in one vacant lot in Cleveland's Waterloo Arts District, an indigo garden had its first successful season.

Jessica Pinsky, the founder of Praxis Fiber Workshop, a nonprofit fiber art center in the revitalized arts district of Collinwood, said it's always been a mission and a dream to have an agricultural component of her organization.

The garden is located on a 120-foot by 60-foot parcel of vacant land leased from the Cleveland Land Bank at the corner of Corsica Avenue and East 156th Street.

Growing indigo requires a very sensitive balance of nutrients in the soil. At one point before Pinsky took it over, the lot was in utter disarray. Bricks, weeds and litter canvassed the once-promising lot that formerly housed a garden. Pinsky described the state of the soil when she acquired it as "total garbage soil."

Indigo is the main crop planted in the center of the garden, with other flowers like marigolds planted on the outer perimeter, which will produce beautiful shades of yellow, red and purple when cropped and boiled in water.

RELATED: How art is being used to revitalize a forgotten Cleveland neighborhood

Her mission is two parts: to educate others about the history of how indigo came to this country while bringing awareness to the harmful effects the textile industry has on the environment.

Harvesting indigo carries with it a long, turbulent history in America as it was brought to this country by slaves. Its production has long traditions in many parts of Africa and Asia.

"Indigo carries with it a complex history in this country. It's important to have a conversation about the history of how it got into this country. That's why I think it's important that we have the indigo garden in a predominately African American neighborhood," Pinsky said. "We want to show how harvesting indigo can be produced in a social and safe way."

What she found out from being in the community and trying out a mobile loom truck this summer was that a lot of the residents didn't feel included in the neighborhood's revitalization efforts. Several years ago, revitalization efforts started along Waterloo Road, where storefronts and the road got a much-need facelift with the focus of art in mind.

"When we first told neighbors near the vacant lot that a garden was coming, many were skeptical because in the past others didn't maintain the gardens and many thought it was going to be another group taking over a space. We wanted to use the opportunity to show residents that the lot could be maintained and could be a really educational project and fruitful for everyone," Pinsky said.

To learn the labor-intensive art of planting, harvesting and producing the dye, Pinsky traveled to Indiana to meet indigo producing guru Professor Rowland Ricketts, who trekked his way to Japan to learn the craft of dye making by locals who have been doing it for generations. 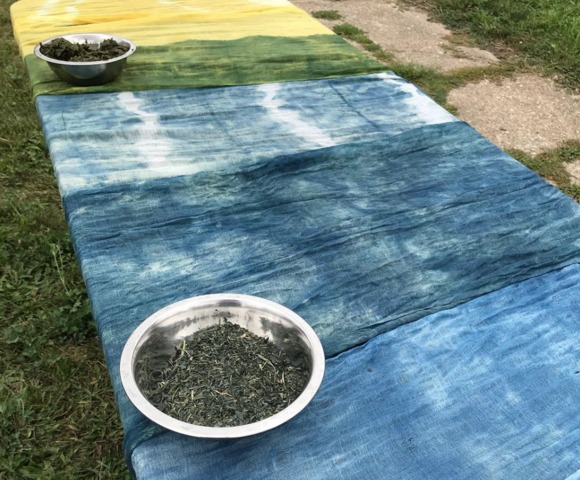 "There's no way I could've led a group to grow indigo and produce the dye without learning the entire process," Pinsky laughs.

Ricketts gifted her with seeds from Japan to start off her garden. After this year's harvest, she will use the seeds produced during this crop's yield.

Once the indigo is picked and laid out to dry for several days under the hot sun, it's fermented during the winter months. Pinsky purchased a small studio and garage for a future fermentation facility to separate the pigmentation from the leaves. 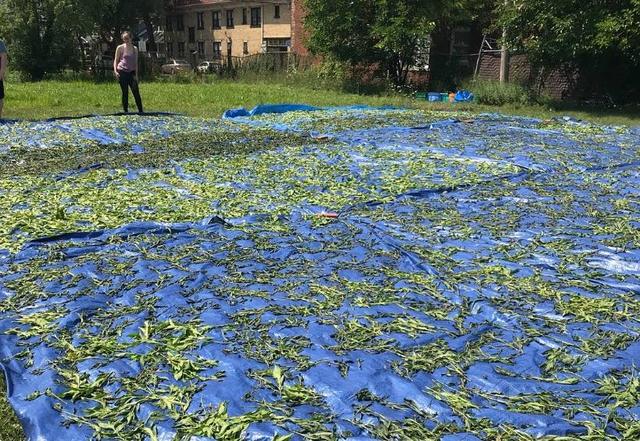 First harvest of indigo in earlier in September. Photo Courtesy of Jessica Pinsky.

While the compost shed won't be ready in time for this year's harvest, Pinsky is using an extraction method to get the dye out.

It's her hope with the garden, that year after year, she can include the neighbors in the community while educating businesses and other organizations about replacing synthetic indigo dye with natural indigo.

"Our goal is to really grow it. Starting with having enough to use in the community and at our studio then trying to sell our natural dye to local clothing companies and artists. Hopefully, we can carve out a special niche here," Pinsky said.

Want to be a part of the harvesting process? Take a weaving or fabric dyeing class?  Visit Jessica Pinsky at Praxis Workshop | 15301 Waterloo Road in Cleveland.