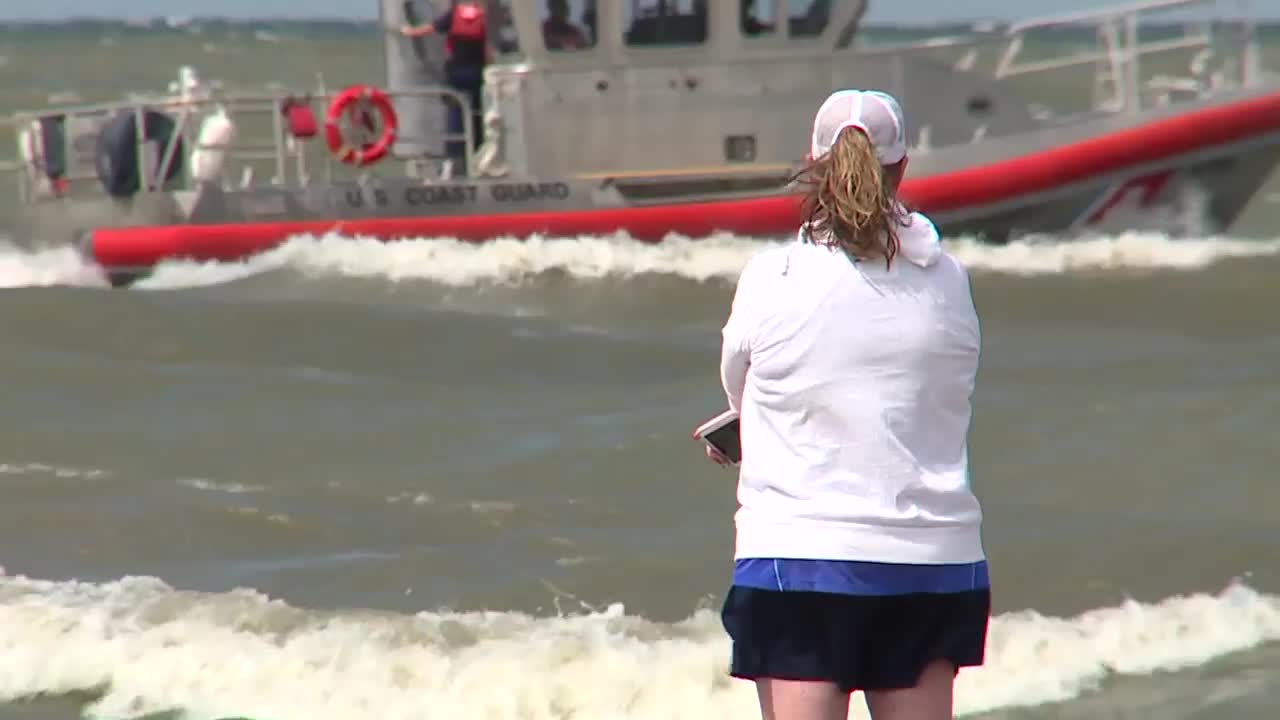 A water rescue is currently underway at Nickel Plate Beach in Huron, according to the Coast Guard. 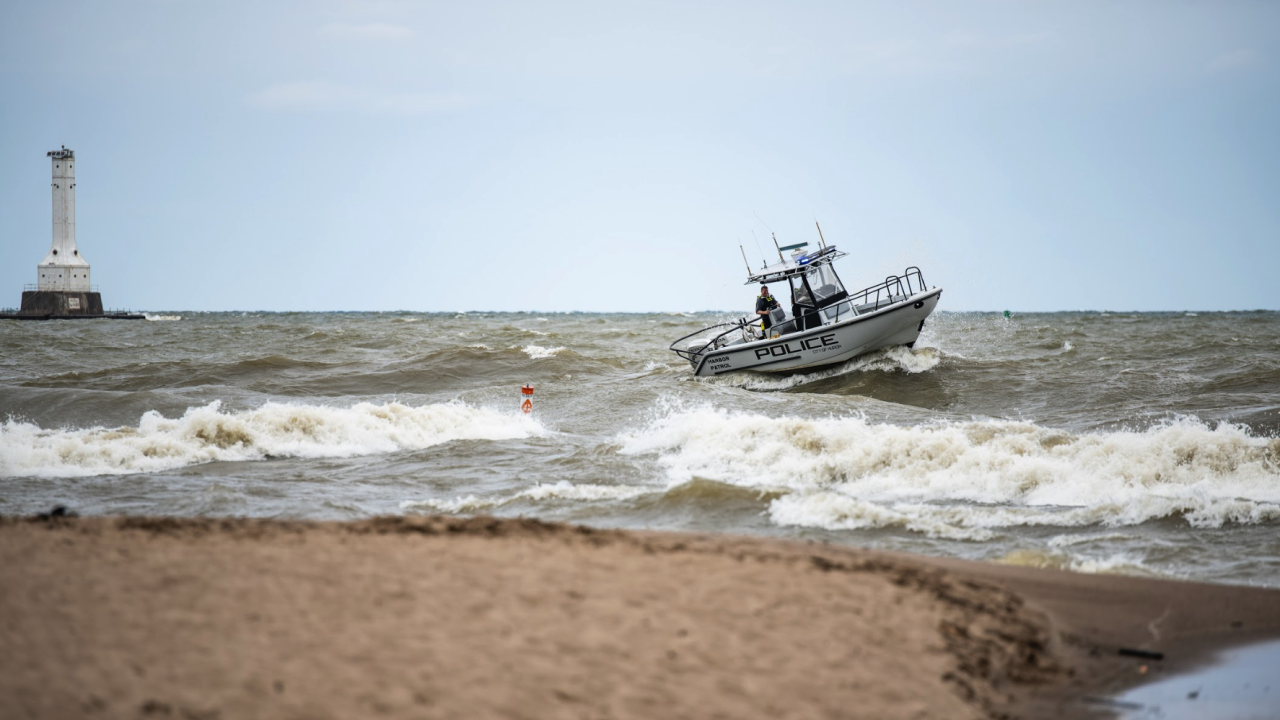 HURON, Ohio — Crews in Erie County continued to search Monday for a missing 18-year-old swimmer who disappeared off Nickel Plate Beach on Sunday.

Wind and choppy water conditions meant crews could only search from shore on Monday. Huron Police Chief Bob Lippert said the search efforts were considered a recovery mission after searchers were unable to find Alvin Martin, 18, on Sunday. The Huron Fire Department said in an updated press release that Martin, of Ashland, Ohio, was on a raft with others and was trying to help other swimmers struggling in the water.

Just before 2 p.m. on Sunday, the Huron Fire Department responded to Nickel Plate Beach with two ambulances, a rescue boat and a command vehicle to perform a shore and water rescue after dispatchers received a call that four children were being pulled past the swim buoys.

A 10-year-old boy and a 13-year-old girl were rescued and later treated and released by Huron Police Marine Patrol.

At the same time, the Huron Fire Department rescued the mother of the children, a 33-year-old woman, who was treated and released.

Martin, 18, was with a group of other men on a raft when they saw people struggling in the water. Martin and the other men were attempting to help the people get to shore when Martin went under the water and never resurfaced, according to police.

The Coast Guard deployed a helicopter and was assisting local fire and police in trying to find Martin.

According to the fire department, a total of 71 first responders assisted in the search over a span of three hours. After crews performed numerous grid search sweeps with water vessels and numerous shore-based first responder chains, water-based efforts were suspended due to poor weather conditions.

Rhonda Gomez was at the beach on Sunday after search efforts began. She said she was staying in Sandusky and had traveled from the Pittsburgh area.

"We got here at 6, 6:30 [p.m.], and I looked over and I saw an ambulance in the parking lot over there, and I saw a rescue crew," Gomez said. "It didn’t even dawn on me that it could’ve been something major."

Gomez said she saw the newspaper Monday morning and realized there was someone in need of rescue. She described the water conditions on Sunday as being bad.

"I honestly wouldn’t even get in there. It was so bad," Gomez said. "You could tell the undertow would have sucked you right under."

She said the waves were much higher than they were on Monday, "six, eight feet."

Gomez was surprised to see Nickel Plate Beach has no lifeguard.

"I was just like, 'There should be somebody here,'" Gomez said. "And if not a lifeguard, then they should have one of those posts where they have the red-orange-yellow reel, where they tell you how [dangerous] it is."

Chief Lippert said Nickel Plate Beach and the city of Huron are unique in how they are positioned along the shore of the lake.

"When the winds blow out of the north or northeast, we really take the brunt of it," Lippert said. "A lot of momentum is built up over open water by the waves created by the wind, and they really come crashing into Nickel Plate Beach."

That, in addition to the corner created by the pier jutting out into the lake, perpendicular to the shoreline, "creates a dangerous place," Lippert said.

The undertow, Lippert said, can pull swimmers away from shore.

"Try as they might, they cannot swim against that undertow, and they continue to be pulled out," Lippert said. "Panic will set in of course, human nature. And before they know it, they’re overcome and they’ve exhausted themselves and they’re in deep trouble."

Lippert urged swimmers not to fight the undertow if they are pulled out by it.

"Let the undercurrent take you," Lippert said. "Let it take you out. Don’t try to swim against it. At some point, it’s going to stop pushing you out and you’ll find yourself being able to stand still, tread water, whatever. You might even be on a sandbar where you can stand up and then work yourself back to shore, obviously away from where you got pulled out."

Lippert said Lake Erie's waters "are dangerous and unpredictable at any time" and that the winds can create waves of five to seven feet.

"As of yesterday, we had eight-footers," Lippert said. "You’ve really got to take a look at things and determine if this is a good day to go swimming."

Lippert said there had not been a lifeguard at Nickel Plate Beach at any time during his seven years as chief and that he could not remember there being one at any time. His officers on the marine patrol boat, he said, were able to get to the scene in three minutes and, along with the fire department, helped rescue six people, more than he believed a lifeguard could do on his or her own.

"Our officers understand that when a swimmer’s in trouble, we’re going to do everything we can to get to them," Lippert said. "But yes, we are putting ourselves at risk."

As his officers and other agencies continue their recovery mission, Lippert expressed his sympathy to Alvin Martin's family, who he said continued to hold vigil on Nickel Plate Beach.

"It’s a terrible tragedy," Lippert said. "Just came here to try to have a good time and it ended horribly. And we feel terrible for them."

Lippert said there have been water rescues in the same area before. One year prior to Martin's disappearance, Lippert said officers rescued a woman in the same spot. Seventeen years ago, around the same time of the season, officers said four males drowned while attempting to rescue a female from the undertow. She was eventually able to save herself.

Lippert also noted that, while there is no lifeguard at Nickel Plate Beach, the parks and recreation department has someone out at the beach to collect a fee from visitors. When no one is out there, he said, the beach is assumed to be closed. He also said there's "clear signage" on the beach, indicating that waters are dangerous and unpredictable and that people should swim at their own risk.