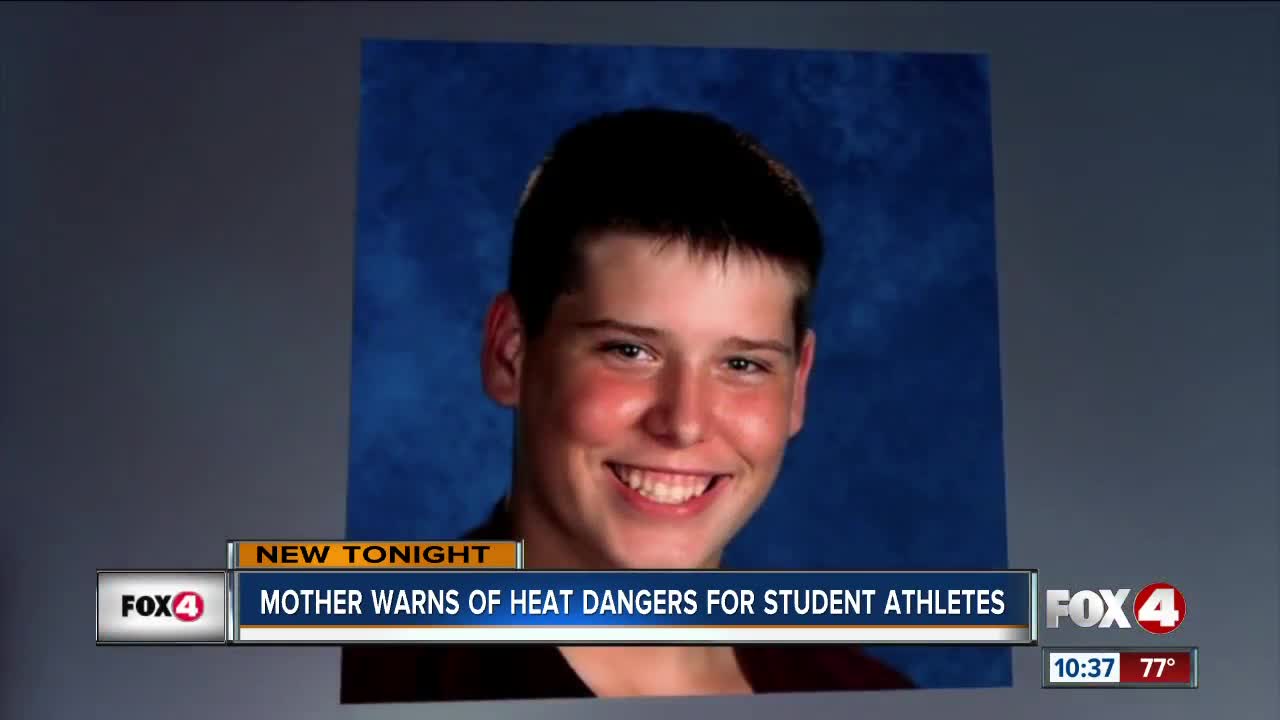 Riverdale High School Student, Zach Polsenberg suffered a heat stroke on the football field and died days later in the hospital back in July 2017.

FORT MYERS, Fla. — Temperatures are going up which means summer is right around the corner. And soon enough, student athletes will be going to summer practices and conditioning.

A Florida mother who lost her son to heat stroke is warning parents and athletes of heat-related dangers so they won't meet the same fate as Zach Polsenberg.

“Zach was in a summer workout. He was running and got over heated, but he didn’t stop because he didn’t want to let his team down,” said Laurie Giordano, Zach’s mother.

Zach, who was a student at Riverdale High School in Fort Myers, Florida, suffered a heat stroke on the football field and died days later in the hospital in July 2017.

“I not only lost my son in that moment, but I lost whatever future he would have had,” Giordano said.

She said Zach would have graduated this weekend with the rest of his class. Instead, she is keeping her son’s legacy alive.

“His entire life, he has been a protector, that’s just who he was. He wouldn’t let anyone else go through this,” Giordano said.

Giordano has been pushing for tougher Florida High School Athletic Association safety regulations for heat safety, including Wetbulb Globe Temperature Thermometers, which measure heat stress. She was also pushing to mandate cooling zones and cold tubs on every field for all sports, something she said could have saved her son.

“Which is just a horrifying thought to me — that a $150 tub, ice and water could have saved my son’s life,” she said.

The School District of Lee County added cold tubs partly in response to Zach’s death. But last year, the FHSAA only made the policies strongly suggested, not mandatory for schools.

Giordano pushed for them again just last month but she said they voted against them — again.

And it turns out, the policies are only suggested for the school year, not in the summertime when temperatures get really hot.

“Kids need to know how to protect themselves and parents need to back them up on that,” Giordano said.

The Zach Martin Memorial Foundation made brand new videos educating athletes on the signs and symptoms of heat illness. Plus, they inform parents on how to help protect their kids.

“You’re saving your child’s life by helping them get ready for these tough practices,” Giordano said.

Last year, the FHSAA did mandate athletes and coaches to watch a heat safety video before the start of the school year but Giordano said more still needs to be done. She said she will continue to push for more safety guidelines.