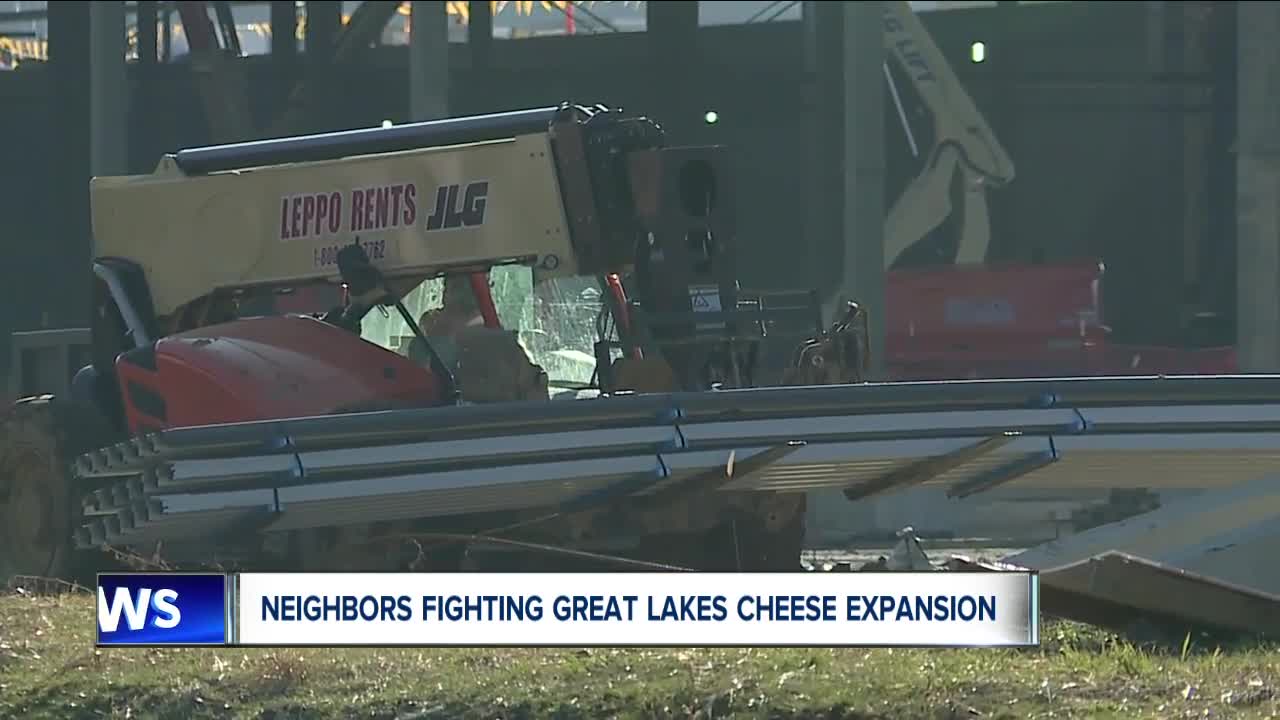 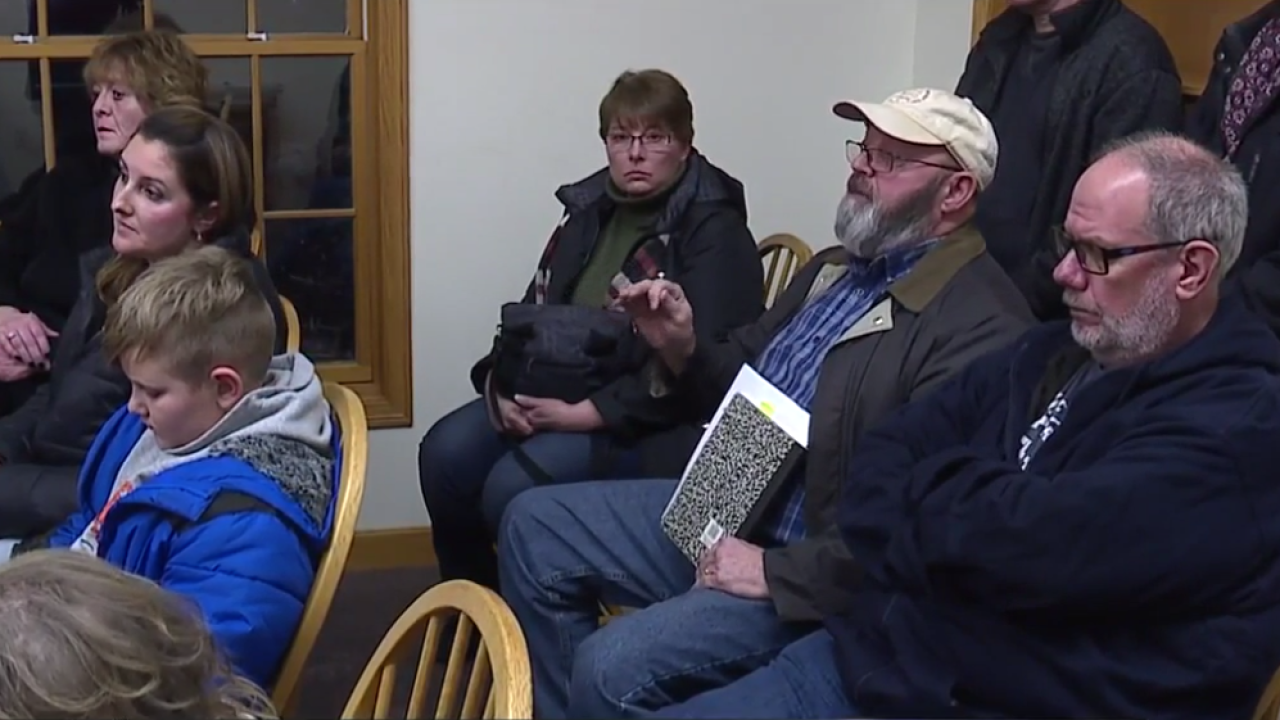 GEAUGA COUNTY, Ohio — Frustrations boiled over Tuesday night at a Troy Township Trustees meeting in Geauga County as a family living next door to a business’ massive expansion project accused local leaders of not doing enough to enforce its own zoning codes.

Tim and Darlene Cox have been embroiled in a fight to preserve their picturesque property for nearly a year after Great Lakes Cheese Company, a national cheese packager and distributor, broke ground on a massive, 290,000 square foot expansion of its manufacturing and warehouse space.

The expansion is also expected to create an additional 400 jobs on top of the 650 people currently employed in Ohio. JobsOhio has provided the company with more than $10 million in incentives. As part of the expansion, Great Lakes acquired a tract of land that borders the Cox family’s tree-lined property.

“Since November we have been up here every Tuesday to see [the Troy Township zoning inspector] with more complaints,” Tim Cox said. “Nothing is happening. How do I get results? What do I have to do?”

Tuesday’s township board of trustees meeting featured a tense public comment period where members and supporters of the Cox family implored local leaders ‘to do their job.’ Since Great Lakes began construction in the spring of 2019, the Cox family said they have had to contend with incessant noise, debris, light pollution and dust coming from the construction site.

“We don’t like getting up in the morning because we know what we are going to hear all day,” Darlene Cox said.

In addition to zoning complaints, which still remain under investigation, the Cox family claims Great Lakes and its partners were negligent in the early stages of construction. Acting on a complaint, the Ohio EPA found Great Lakes and its partners to be in violation of state regulations in June 2019. Environmental regulators said construction crews failed to install the necessary diversion ditches and stormwater management devices at the construction site, which caused silt-laden runoff to flood the Cox family’s property nearly a dozen times in 2019, according to complaints filed with the township zoning commission.

Photos and video provided to News 5 shows sediment-filled streams of stormwater exiting the construction site, flowing into the family’s two ponds, which were subsequently turned into a turbid, milky-brown color. The stormwater also killed several fish and tadpoles in both ponds, Cox said.

According to correspondence dated September 19, 2019, state regulators determined the violations had been resolved. However, by that time, the Coxes claim their property became inundated by floodwaters coming from the construction site a total of 10 times.

In a letter sent to the state, a representative of one of Great Lakes’ construction partners blamed the issues on the unusually rainy spring and early summer.

In a statement sent to News 5 after the township trustee meeting Tuesday night, a Great Lakes Cheese Company representative said the construction project remains in compliance with local and state regulations.

“GLC was not aware an agenda item would be discussed related to the construction site at [Tuesday’s] Board of Trustees meeting, and unfortunately did not have a representative attend who may otherwise have been able to address specific concerns during the meeting. Currently, GLC is in full compliance with all Troy Township zoning requirements, and will continue to be in full compliance when construction is complete,” the statement reads. “ Any prior concerns of the Ohio EPA were resolved to the full satisfaction of the Ohio EPA in September. There are no pending state or local violations related to the construction site. GLC remains ready, willing and able to provide full cooperation to any state or local agency with questions or concerns as construction continues.”

The Cox family disputes Great Lakes’ assertion that the project remains in compliance, pointing to continued flooding near the end of 2019. However, no other state or local sanctions have been levied.

The Cox family is also deeply concerned about the continued disruptions once Great Lakes completes construction. According to building plans filed with the township, the expanded facility will feature nearly two dozen loading docks that point directly to the family’s property. There will also be an access road for heavy truck traffic.

According to the township’s zoning code, Great Lakes is required to build an earthen berm near the edge of the property that will be outfitted with trees. However, citing ODOT guidance, Tim Cox said trees and vegetation have been proven to be inadequate in blocking sound and lights from highway areas. Cox said the same principal applies in his case.

“You don’t see any trees along the lines of the freeways. You know why you don’t see them? Because they don’t work,” Tim Cox said. “I’m basically starting to wonder if the board of education, the township trustees or anybody in Troy got a call saying, ‘hey make this happen and don’t worry about the Coxes. They will deal with it or they will go away.’ Something stinks, something is fishy.”

New township trustee Sharon Simms, who was not involved in the early stages of Great Lakes Cheese’s expansion and zoning process, told members of the gallery that the township is in the process of updating its zoning code to better meet today’s standards. However, she and other trustees said their hands are largely tied because all of the variances have been granted.

That being said, the trustees vowed to make a concerted effort to open lines of communication between the Cox family and Great Lakes leadership.