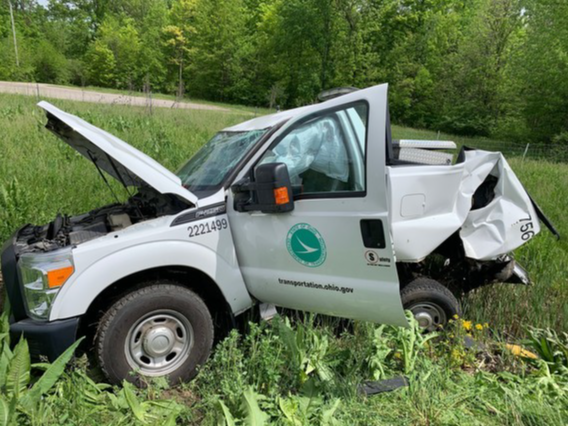 CLEVELAND — With the summer season upon us and construction season well underway, an all too familiar problem has come back with a vengeance: the number of crashes in Ohio work zones, including those involving state road crews, is on the rise.

In 2019, there were more than 6,500 work zone crashes in Ohio, amounting to a 40% increase compared to 2018, according to state data. Despite months of stay-at-home restrictions intended to curb the coronavirus, 2020 is on track to exceed 2019's totals, according to ODOT spokesperson Amanda McFarland.

“If you can't move over a lane when you're on the multi-lane highways, we ask that you slow your speed, reduce your speed,” McFarland said. “Yes, it might take you a little more time to get to your destination if you have to travel through a work zone but plan accordingly.”

Since mid-February, there have been a total of 17 ODOT crews struck, six of which have occurred since the last week of May. The increase comes despite a total reduction in traffic of up to 45%.

On May 27th, the driver of a semi-tractor trailer slammed into the back of an ODOT truck that was towing, ironically, an arrow board alerting drivers that they need to move over. The ODOT employee had to be airlifted to a Columbus area hospital for safety. A few days prior, an ODOT employee was hit by a driver as he was standing outside of his vehicle while closing a highway ramp.

The crashes were entirely preventable if people had followed the ‘move over’ law, McFarland said.

The ‘move over’ law is also designed to protect motorists as well. Colliding with some of ODOT’s large vehicles and heavy machinery can pose grave consequences for motorists.

“It's to protect the men and women working on them but also [motorists],” McFarland said. “Last year there were 16 fatalities in Ohio work zones. Fourteen of those were motorists.”