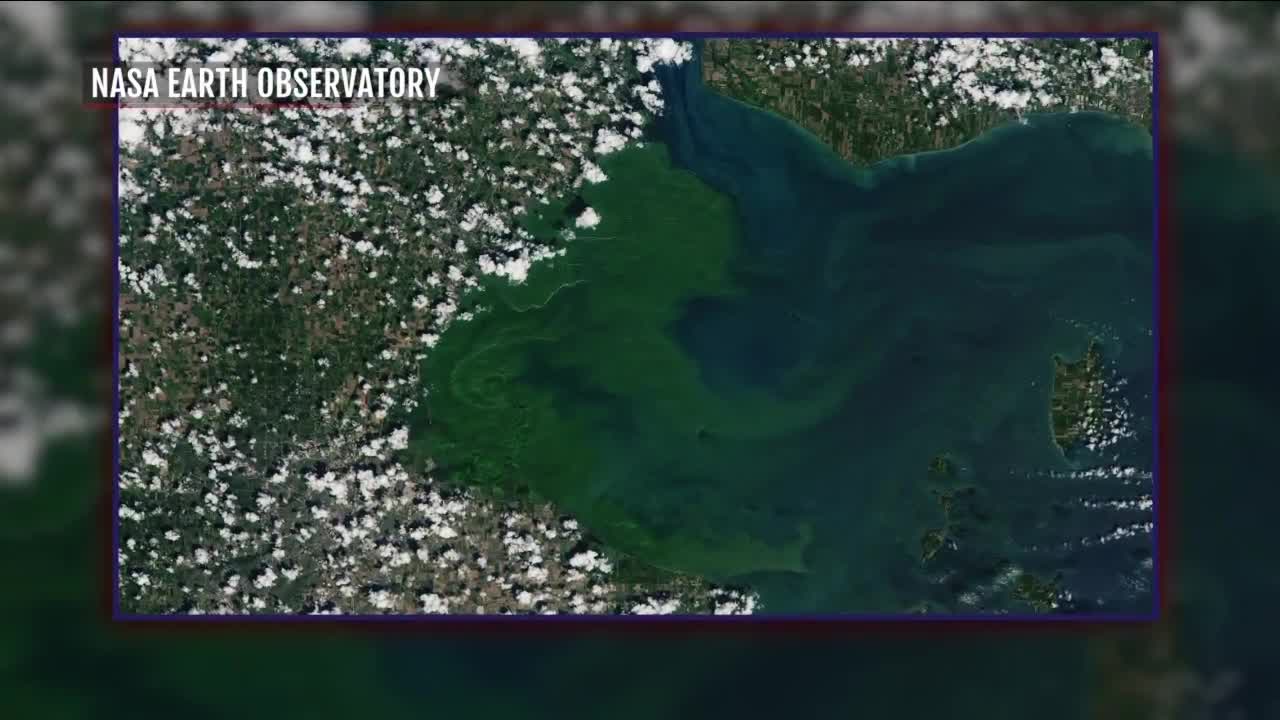 OTTAWA COUNTY, Ohio — The algae bloom in Lake Erie has grown large enough that it's visible from space.

An image taken by a NASA satellite on July 30 shows where the bloom was most dense in the lake's western basin. A NASA Earth Observatory employee said an image taken Aug. 15 was obstructed by clouds.

Since the end of July, though, the toxic algae bloom has continued its spread from the western basin, moving east toward Port Clinton, Sandusky and the Lake Erie Islands.

At water treatment plants around the region, the algae bloom is costing water treatment plants a lot of money and time. In Ottawa County, plant superintendent Ron Wetzel said a sample the plant submitted to the city of Oregon for analysis showed the highest concentration of microcystins detected this year, at more than 22 parts per billion or micrograms per liter.

"That’s reading the toxin, not just the algae," Wetzel said. "The toxins that are in the water."

Wetzel said the plant has been closely monitoring the algae bloom in the last ten days or so, as it spread toward Ottawa County. He noted an increase in pH last week and said the bloom had remained in the area for close to a week due to good weather conditions and lack of wind.

He showed News 5 two beakers of green water with a high concentration of algae, collected from the lake with a plankton net.

Wetzel described the bloom as the worst the plant had seen in about seven years, despite the money spent to learn about algae and the process of treating it to remove toxins.

"The troubling thing for me is the fact that we’re still here, and it’s actually worse this year than last year for us," Wetzel said. "We spend tens of thousands of dollars on more chemical costs, more carbon, and then this stuff as it carries over from our clarifiers gets into our filters, and our backwashes are much more frequent, which is more money."

Those costs, Wetzel said, are spread out to Ottawa County's water customers.

"They’re paying for it, because they have to pay the cost for us to remove all of this. That’s a huge cost for everybody," Wetzel said.

Kelly Frey, the plant's sanitary engineer, said the plant has a "stringent protocol" from the U.S. Environmental Protection Agency and the Ohio EPA that dictates how often the raw water coming into the plant must be tested, as well as tests that must be run on the treated water to ensure it meets standards.

In addition to testing and treating the water, Frey said Ottawa County is keeping in close contact with other entities, from university labs to people out on the lake to county officials and other water treatment plants from Toledo to Lorain and Avon Lake.

Frey noted that after Toledo experienced a water crisis due to toxic algae, standards were developed to determine when water is safe to drink and when it's safe to swim or go in the water for recreation.

Anything above 0.3 parts per billion (ppb) or micrograms per liter can be a concern for children younger than school age, Frey said, while 1.6 ppb is a concern for drinking water for everyone else.

"We have no detection, no microcystins in our water" once it's processed, Frey said.

Levels of 6 ppb or greater indicate when there should be a recreation advisory for people or animals using the water, while anything higher than 20 ppb, "you should not be in the water or have any exposure at all. That’s a no-touch," Frey said.

All of this monitoring and treatment has a big impact on treatment plants like Ottawa County's, from extra cost to additional chemicals needed for treatment to stress on workers.

While plant leaders said they are handling the problem as best they can, the future of the lake and its algae bloom is uncertain. For now, though, what happens with the algae bloom and its location is largely dependent on wind and weather.

"The lake really hasn’t improved in terms of nutrients," Frey said, referring to the nutrients in the water that contribute to the toxic algae bloom. He and Wetzel said they hoped more would be done to reduce the microcystins and algae in the lake.

Frey said that without changes to reduce the nutrients in the water that contribute to algae, the plant would be faced with making major capital improvements in order to treat the water.

A study by Key-Log Economics, commissioned by the cities of Toledo and Oregon and by Lucas County, noted that the 31 U.S. water treatment plants sourcing water from Lake Erie "incur total annual incremental operating costs of $1.7 million from algae-related impacts."

Photo: Lake Erie algal bloom is now so large that it can be seen from space