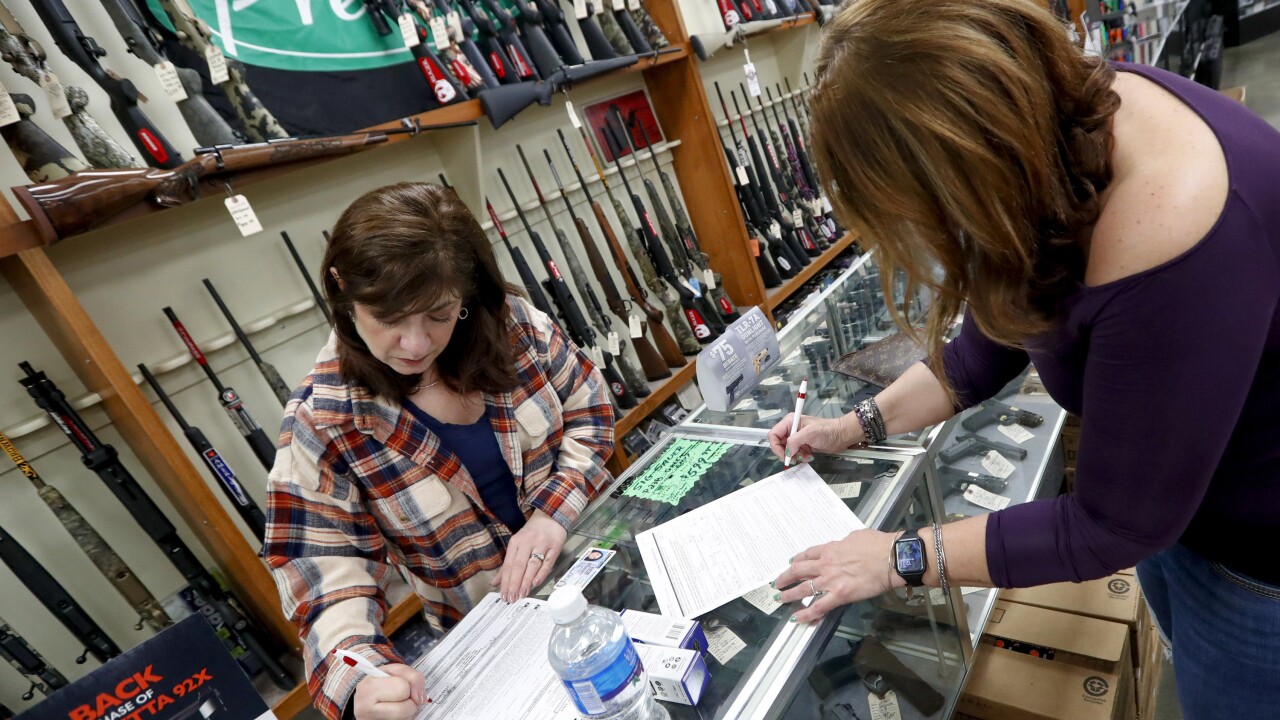 Keith Srakocic/AP
FILE IMAGE: Andrea Schry, right, fills out the buyer part of legal forms to buy a handgun as shop worker Missy Morosky fills out the vendors parts after Dukes Sport Shop reopened, Wednesday, March 25, 2020, in New Castle, Pa. under the new conditions specified for gun stores. The store had closed last week when Pennsylvania Gov. Tom Wolf ordered a shut down of non-essential businesses to slow the spread of the coronavirus. (AP Photo/Keith Srakocic)

These were just a few of the characterizations people offered to the Ohio House Criminal Justice Committee of a “stand your ground” proposal that lawmakers reviewed Tuesday.

Starting in the afternoon and continuing well into the evening, a steady stream of citizens implored lawmakers to nix the proposal. They said the bill is overly generous to people who shoot someone, purportedly in self-defense, and will establish further legal protections of racist killings.

Stand your ground laws are associated with two high-profile deaths of black men by white killers. Jurors who acquitted George Zimmerman in the killing of Trayvon Martin discussed the law in making their decision. Also, prosecutors initially declined to charge two men in the killing of Ahmaud Arbery, a black man, citing the legal concept.

Tuesday’s hearing comes after the death of George Floyd, a black man who died with the knee of a white police officer over his neck. The officer has been charged with murder. Floyd’s death has triggered a nationwide reckoning of racial disparities in the American criminal justice system.

“Are we so desperate to shoot first and ask questions later that we want to codify that desperation into law?” asked Katherine Mesmic, one of three lawyers from the Franklin County Public Defender’s office who testified against the bill Tuesday.

Mesmic and her colleagues face a difficult task dissuading the Republican majority against the bill. Many House Republicans campaign on gun rights, some on stand your ground laws specifically.

The committee chairman, Rep. George Lang, recused himself from the hearing, citing an unspecified conflict of interest. He owns a gun liability insurance company along with two executives from the Buckeye Firearms Association, a powerful gun lobby group in Ohio.

Current Ohio law says people in their home have no “duty to retreat” from a situation before using force, including deadly force, in self-defense. HB 381 would remove that duty to retreat anywhere that people are lawfully present, so long as they reasonably believe the force is necessary to defend themselves.

The proposal automatically allows anyone who uses force in self-defense to demand a pretrial hearing. There, a prosecutor must prove by clear and convincing evidence that the person did not act in self-defense.

Critics say the bill works on different levels against black people. For one, it protects people who may “reasonably believe” their actions were necessary, though deep-seeded racism could fuel that belief. Likewise, they say black people are much less likely to successfully mount any successful stand your ground defense.

“This will allow people who are privileged to shoot first and ask questions later,” said Sandra Fisher, a black woman who spoke against the bill. “Is this really what we want for the state of Ohio?”

Other groups like the ACLU of Ohio and the Ohio Prosecuting Attorneys Association testified against the bill as well.

Throughout the hearing, Rep. Tavia Galonski, D-Akron, one of few black lawmakers at the Statehouse, asked a series of what were technically questions to witnesses, but effectively provocative statements against the proposal.

“Could the goal of HB 381 be to get rid of black and brown people in Ohio?” she said.

Several who testified Tuesday scratched their heads at the timing. Windows around the Statehouse are covered in plywood after the George Floyd protests turned destructive two weeks prior.

The hearing was originally scheduled for last week, then postponed amid massive, peaceful demonstrations on Columbus streets about Floyd, racism in America and police brutality. Proponent testimony came on the anniversary of Trayvon Martin’s death.

“This bill will allow one to choose violence when there’s a way to retreat and diffuse the situation,” she said. “I do not believe adding guns to the situation is a solution.”