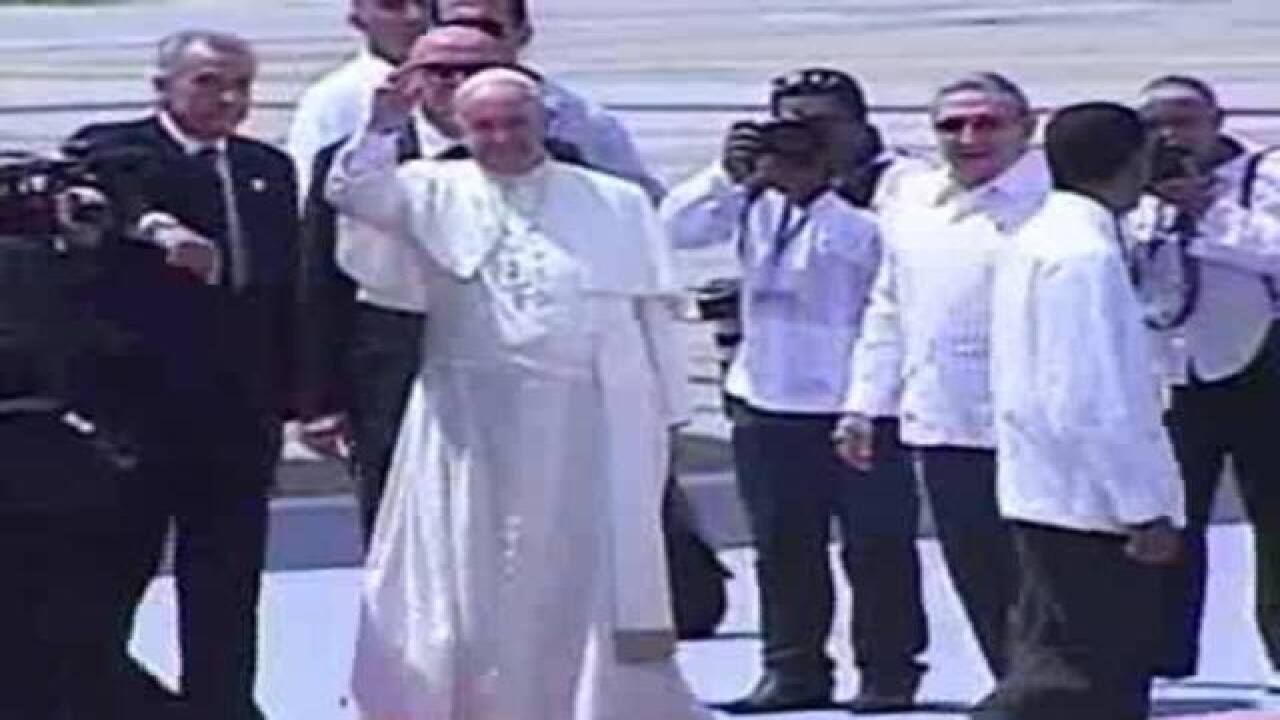 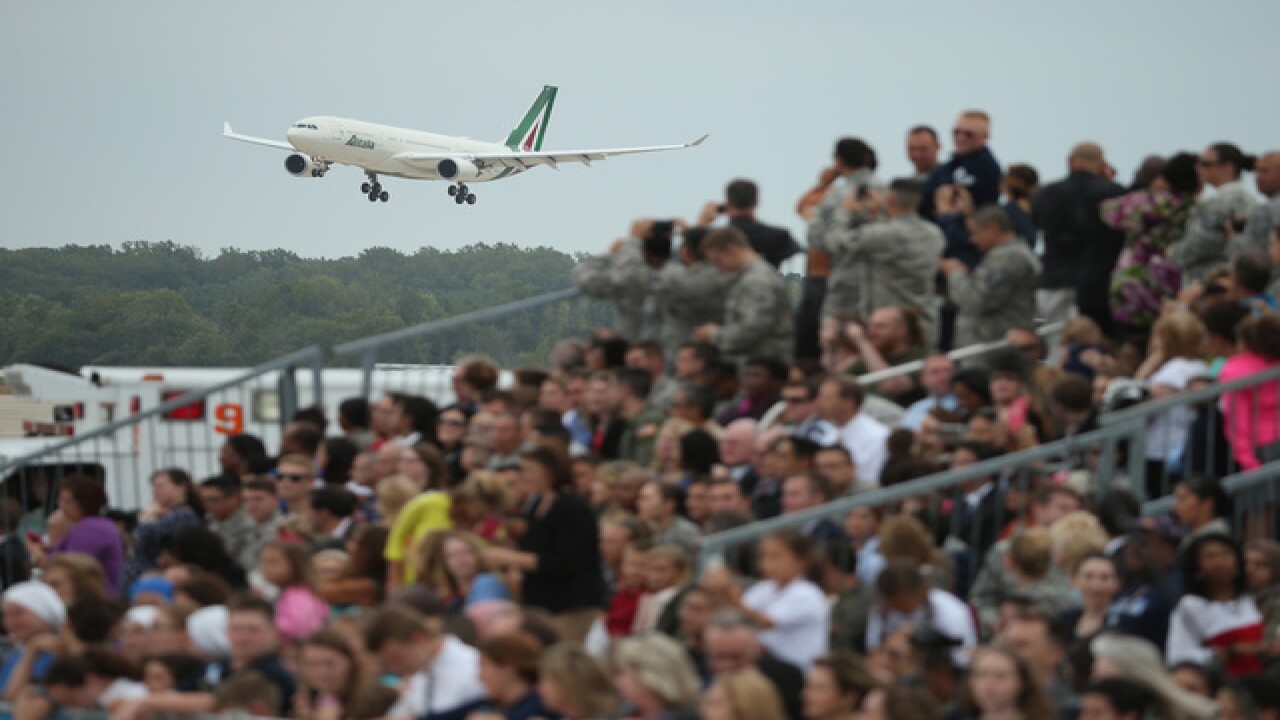 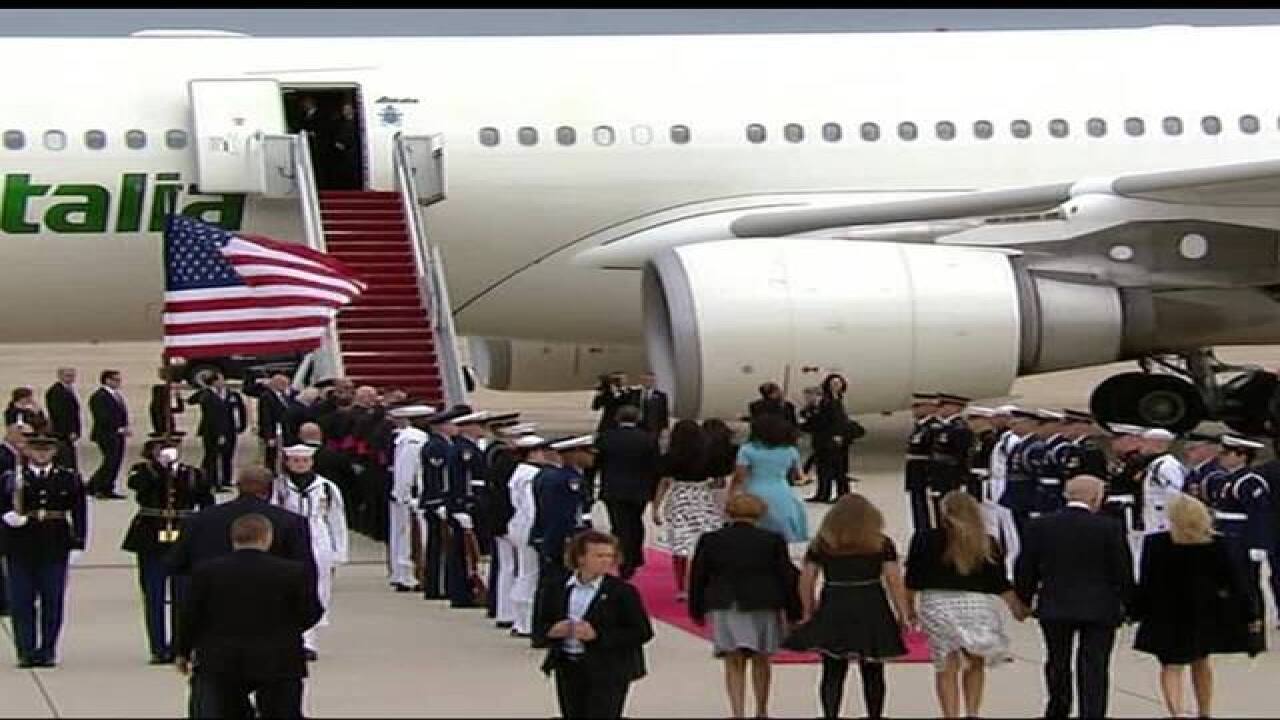 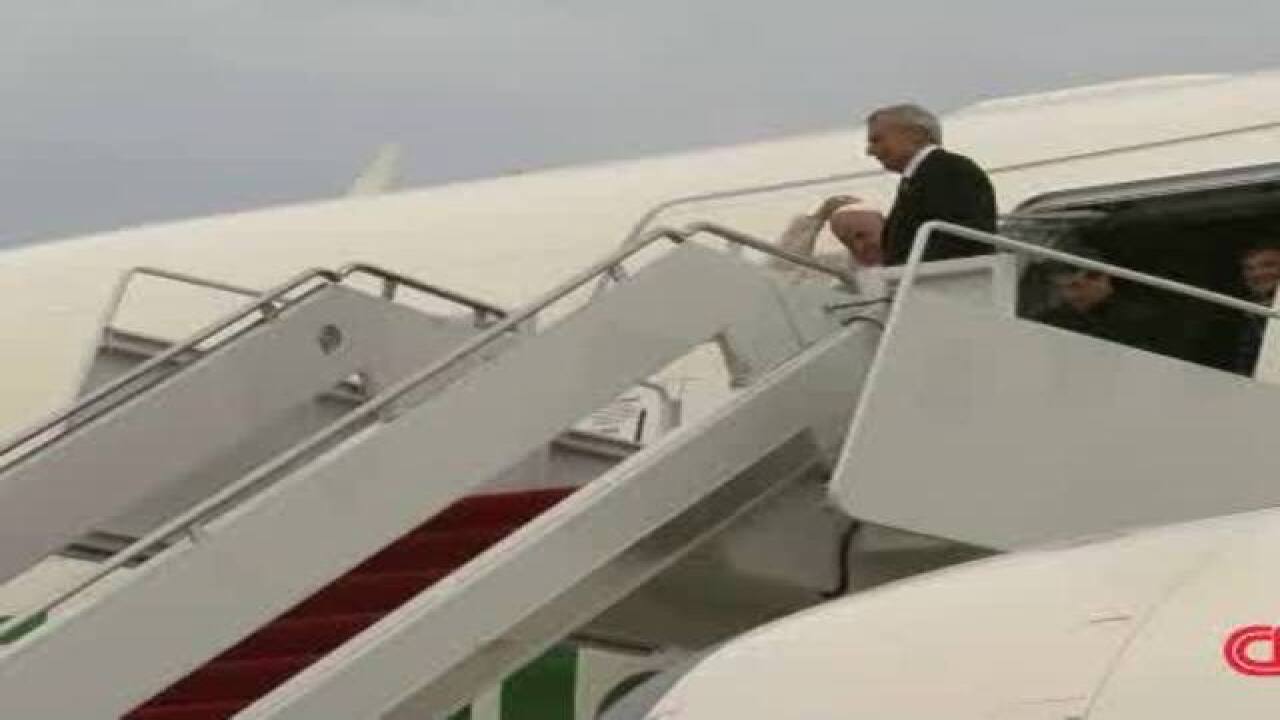 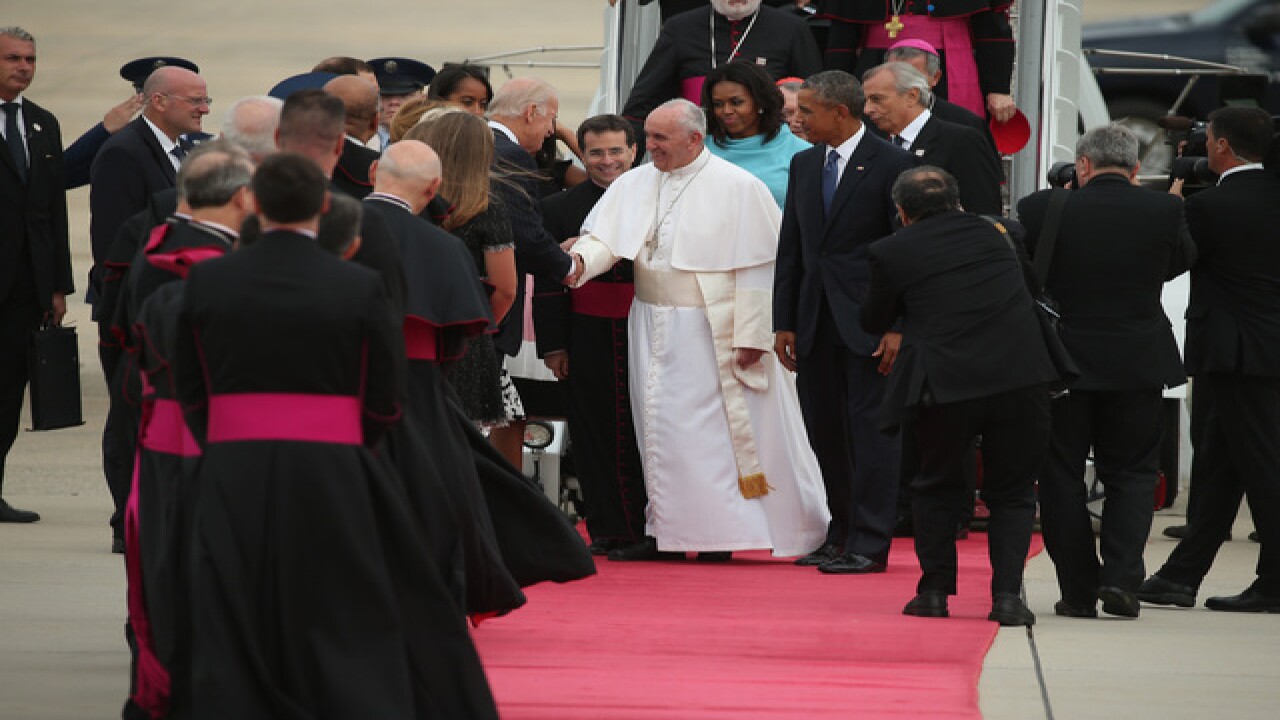 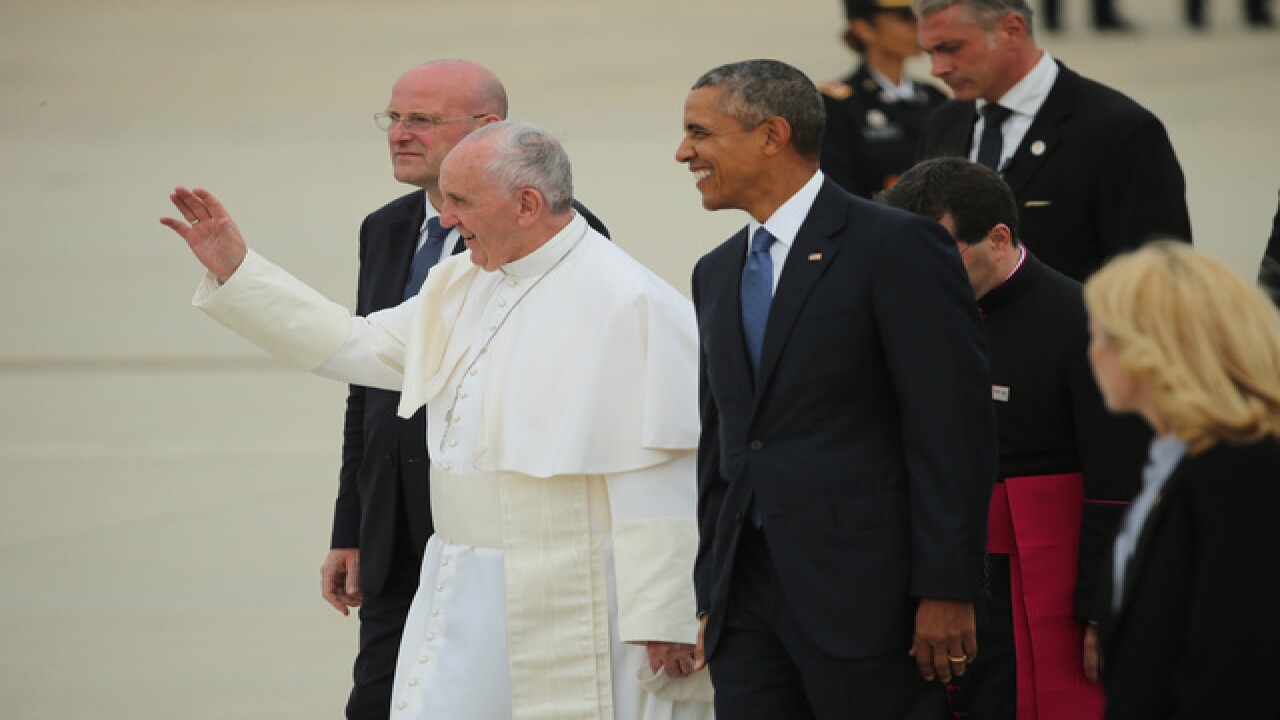 Pope Francis arrived Tuesday on the first visit of his life to the United States, bringing his "church of the poor" to the world's wealthiest superpower and a country polarized over issues closest to his heart: immigration, social injustice and economic inequality.

According a rare honor to the pontiff, President Barack Obama and Vice President Joe Biden planned to greet Francis on the red-carpeted tarmac at Andrews Air Force Base in Maryland, just outside the nation's capital, where the pope's Alitalia plane touched down from Cuba. Presidents usually make important visitors come to them at the White House.

During his six-day, three-city visit to the U.S., the pope will meet with the president, address Congress, speak at the United Nations in New York and take part in a Vatican-sponsored conference on the family in Philadelphia.

The 78-year-old Argentine known as the "slum pope" for ministering to the downtrodden in his native Buenos Aires is expected to urge America to take better care of the environment and the poor and return to its founding ideals of religious liberty and open arms toward immigrants.

Francis' enormous popularity, propensity for wading into crowds and insistence on using an open-sided Jeep rather than a bulletproof popemobile have complicated things for U.S. law enforcement, which has mounted one of the biggest security operations in American history to keep him safe.

The measures are unprecedented for a papal trip and could make it nearly impossible for many ordinary Americans to get anywhere close to Francis. For anyone hoping to get across town when the pope is around, good luck.

For all the attention likely to be paid to Francis' speeches, including the first address from a pope to Congress, his more personal gestures — visiting with immigrants, prisoners and the homeless — could yield some of the most memorable images of the trip.

"What the pope does in the United States will be more important than what he says," said Mat Schmalz, a religious studies professor at Holy Cross College in Worcester, Massachusetts. "There are a lot of things he will say about capitalism and about wealth inequality, but many Americans and politicians have already made up their minds on these issues. What I would look for is a particular gesture, an unscripted act, that will move people."

In Cuba, Francis basked in the adulation of Cubans grateful to him for brokering the re-establishment of diplomatic relations between the U.S. and the communist island. The pope is expected to raise the "normalization" process while in Washington, where Congress alone can lift the embargo long opposed by the Vatican.

He arrives at a moment of bitter infighting across the country over gay rights, immigration, abortion and race relations — issues that are always simmering in the U.S. but have boiled over in the heat of a presidential campaign.

Capitol Hill is consumed by disputes over abortion and federal funding for Planned Parenthood after hidden-camera videos showed its officials talking about the organization's practice of sending tissue from aborted fetuses to medical researchers. While Francis has staunchly upheld church teaching against abortion, he has recently allowed ordinary priests, and not just bishops, to absolve women of the sin.

Francis' visit comes three months after the U.S. Supreme Court legalized gay marriage, putting U.S. bishops on the defensive and sharply dividing Americans over how much they should accommodate religious objectors. The pope has strongly upheld church teaching against same-sex marriage but adopted a welcoming tone toward gays themselves, saying, "Who am I to judge?" when asked about a supposedly gay priest.