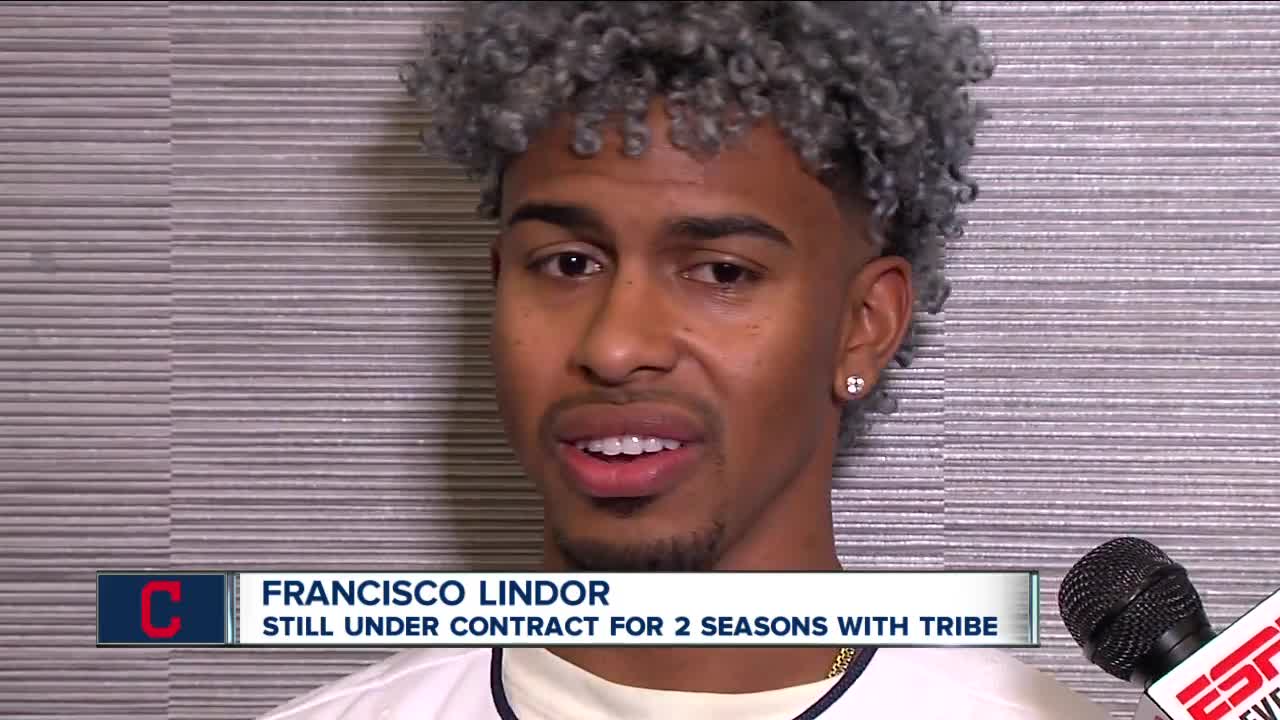 Cleveland Indians shortstop Francisco Lindor was one of many players who made an appearance at the eighth annual Tribe Fest Saturday, but could this have been his last? Lindor answered questions about his future and Cleveland, which is still undecided. 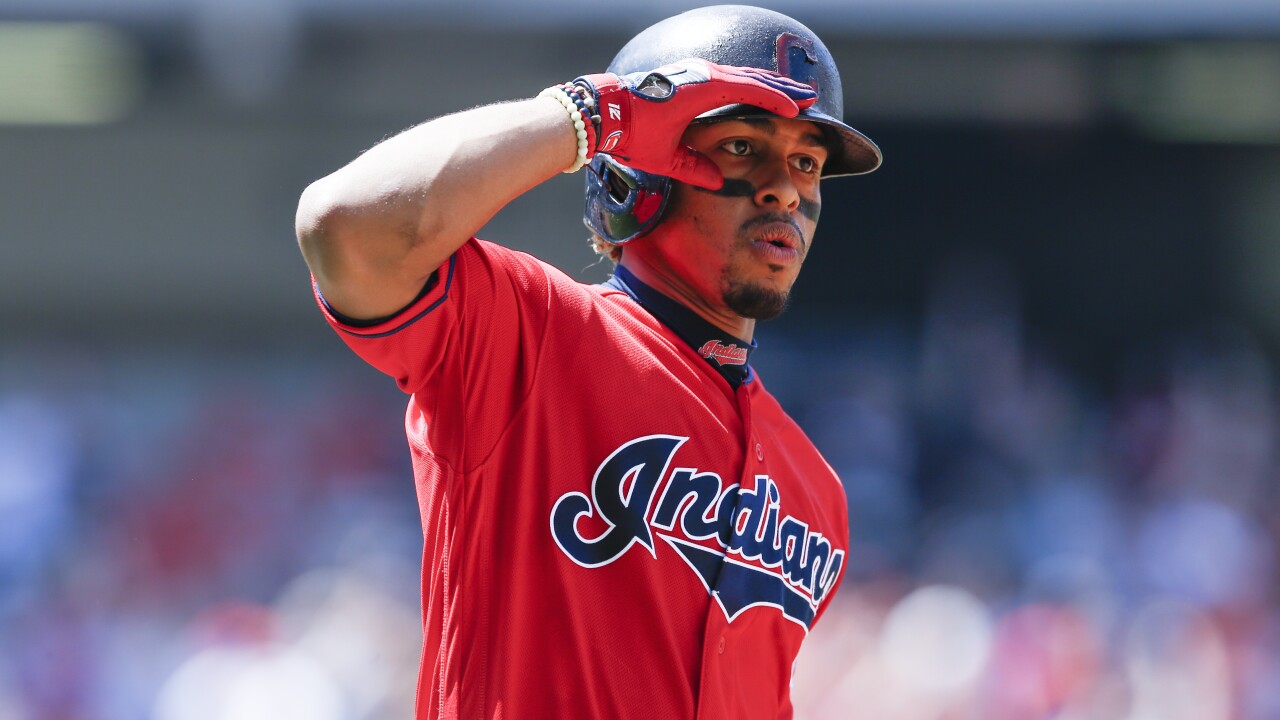 CLEVELAND — Cleveland Indians shortstop Francisco Lindor was one of many players who made an appearance at the eighth annual Tribe Fest Saturday, but could this have been his last? Lindor answered questions about his future and Cleveland, which is still undecided.

Waiting for the right offer
Lindor said he doesn’t spend a lot of time worrying about the trade rumors that have surrounded him, and simply focuses on the fact he still wears an Indians jersey for the time being.

“I understand it’s a business, it’s part of the business. I would love to be here and I’m here and I’m happy that I’m still here in Cleveland. I’m enjoying the process, enjoying the games, I’m enjoying everything,” Lindor said, echoing the buzzword the owner Paul Dolan said to fans when speaking about his future with the team. “I’m going to play as hard as I can and I’m going to enjoy everything.”

In the middle of Tribe Fest, after spending time meeting and interacting with hundreds of fans wearing his jersey, Lindor opened up about his tenure in Cleveland and why a long-term deal hasn’t been reached yet, noting that the team “hasn’t offered me the right things.”

The 26-year-old shortstop said he if the Indians, more specifically the Dolans, could present the right offer, he would love to remain in Cleveland.

“I would love to be in Cleveland, I love Cleveland. This is home,” Lindor said. “This is a great city, you’ve got great fans, and we’ve got a good team and a great group of guys. The front office is good, the coaching staff is good, the club, everybody that’s involved in the Indians organization is great and I love it here. This is where I came up and I’m extremely comfortable here.”

Money talks
Lindor, who slashed .284/.335/.518 with 32 home runs, 74 RBI and 22 stolen bases in his 654 plate appearances with the Tribe last season, recently avoided arbitration and reached a one-year, $17.5 million deal, but expressed that he’s looking for the right deal to be presented to him if the Indians do, in fact, plan to keep him long term, referencing other players around the league who have recently signed major contracts.

“We want to make sure we get paid for a long time, we want to be in this game for a long time. Do I feel like when I’m 37 am I going to be down with my playing level? No, I don’t think so. The way I work, and the way we all work, I don’t think we’re going to be down,” Lindor said. “I’m sure [Anthony] Rendon wanted more years, but he got a perfect deal for him that he wanted, he deserves every penny he gets—if not more. Same thing with Gerrit Cole, all the guys that are getting paid this year, they all deserve that amount of money and they signed it because they thought it was the right amount of money for them.”

While Lindor knows massive contracts are being signed around the league, he isn’t sure if there is a monetary number that is right for him specifically.

“Is there a right number for me right now? I haven’t really thought about it. I’m not there yet. I’m worried about what I’ve got in front of my toes,” Lindor said. “A lot of money sounds pretty right now, everything sounds pretty, a lot of years sounds pretty too but at the end of the days, it’s about what best for me and my family and also for the Indians organization. If they don’t think I can stay here because of the money situation then I won’t be here but I do want to be in Cleveland. I love the Cleveland Indians, I love the Cleveland fans. This city has grown on me a lot.”

Lindor expressed that he isn’t sure when a deal might pique his interest but said he knows that no matter what happens it will happen for a reason.

“Do I want $500 million? Of course, everybody wants that,” Lindor said, smiling at reporters. “I don’t care who you are, you could be a billionaire and you still want that. It’s just a matter of time, we’ll see. Just having conversations with my agents, the front office, whenever that does happen we’ll talk about it and trust me if I sign a deal you guys will be the first to know.”

While Lindor was lighthearted and able to joke about the money, or lack thereof, being offered, he knows the seriousness surrounding the reality that his future in Cleveland isn't certain. Lindor said he just isn’t in a place to stress about it, reflecting on his past and how he’s too happy with the success he’s found to be weighted down with the worries of contract negotiations and salary offers.

Lindor knows his value
It’s no secret that Lindor is a star. He’s the kind of player you build a team around—and he knows it. He’s a two-time Silver Slugger, two-time Gold Glove winner, Platinum Glove winner and four-time All-Star. He’s a player that many teams have their sights on.

It’s easy to worry about Lindor’s future with the Tribe, but fans can hang their hats on one thing if nothing else—Lindor loves this city and would seemingly prefer a deal come from the Indians over another team. If—and that's a big if—the Indians can make a deal work, Lindor could find himself in Cleveland for the long haul.

“I love the fans. Like I said, I want to stay here Cleveland is home,” Lindor said. “No one wants to play for league minimum for the rest of their career, but it’s not about that. I’m not money-driven, I’m championship-driven. That’s what I want wherever I go I want to win. I want to bring a championship to the city of Cleveland, this is what I want to do, that’s my mission. I’m here today and I want to win for the Indians. It has nothing to the money. It has nothing to with years. It has nothing to do with who I like and who I don’t like. It has to do with championships. The front office trying to put a team [together] to win, not to save money, they’re supposed to try to put a team [together] to win and I’m here to try and win.”