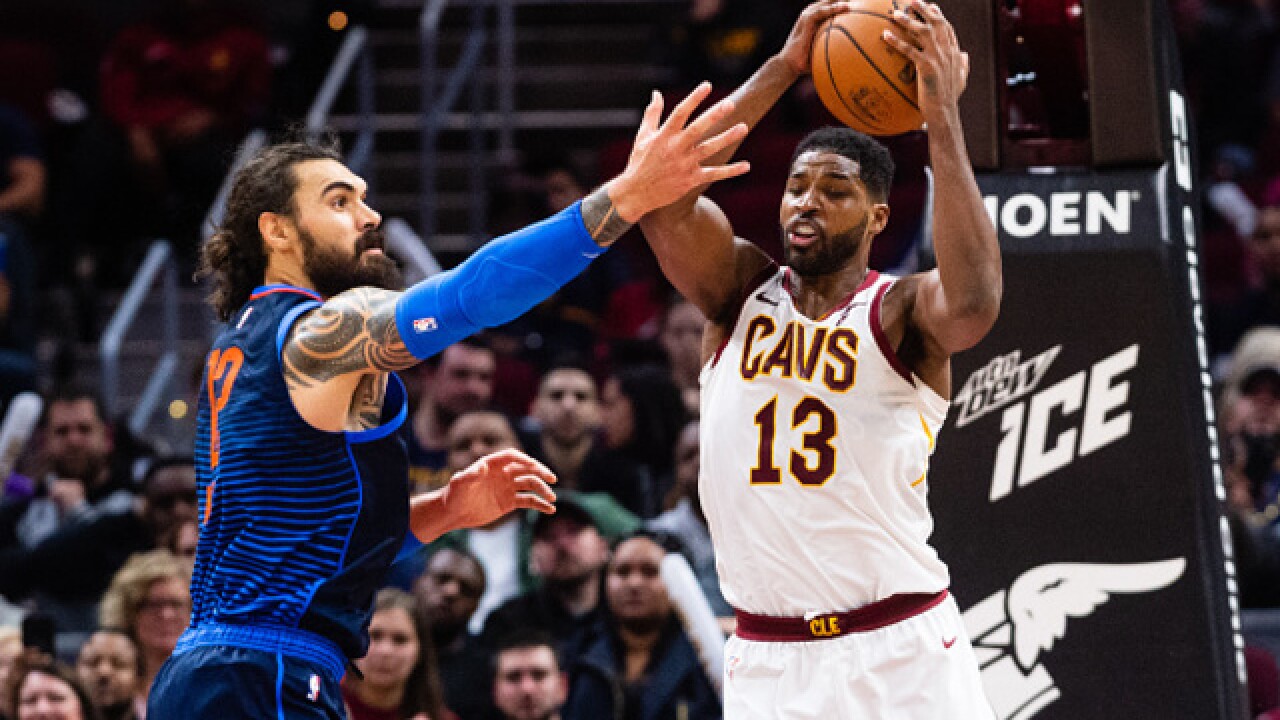 Copyright 2018 Scripps Media, Inc. All rights reserved. This material may not be published, broadcast, rewritten, or redistributed.
Jason Miller
<p>CLEVELAND, OH - NOVEMBER 7: Steven Adams #12 of the Oklahoma City Thunder fights Tristan Thompson #13 of the Cleveland Cavaliers for a rebound during the second half at Quicken Loans Arena on November 7, 2018 in Cleveland, Ohio. The Thunder defeated the Cavaliers 95-86. NOTE TO USER: User expressly acknowledges and agrees that, by downloading and/or using this photograph, user is consenting to the terms and conditions of the Getty Images License Agreement. (Photo by Jason Miller/Getty Images)</p>

Westbrook sprained his left ankle Monday, but the Thunder withstood Cleveland’s fourth-quarter run without the two-time MVP to win its sixth straight game after starting the season 0-4.

Alex Abrines’ 3-points shot from the corner with 4:31 left broke an 84-84 tie and put Oklahoma City on top for good.

Schroder, starting in Westbrook’s place, was 11 for 19 from the field. Paul George scored 18 points and Jermai Grant had 12.

Cleveland added two more players to its ever-growing injury list. Rookie point guard Collin Sexton made his first career start after George Hill was a late scratch because of a sore right shoulder.

Sexton, taken with the eighth pick in the draft, scored a team-high 15 points in a career-high 42 minutes.

Cedi Osman started in Kevin Love’s spot, but left with back spasms in the first quarter and didn’t return. Cleveland is also playing without forward Kevin Love, who had surgery on his left foot last week and is expected to be out for several weeks.

Smith scored 13 points and Rodney Hood and Jordan Clarkson each had 11 for Cleveland.

Oklahoma City scored 17 straight points over a period of 4:36 in the second and third quarters to take a 56-40 lead.

The Thunder scored the last nine points of a lackluster first half to take a 48-40 lead. George made a basket and a free throw before ending the second quarter with a 29-foot 3-pointer as the buzzer.

Schroder had a three-point play and a jumper and Grant hit a 3-pointer to help build the 16-point lead.

Westbrook traveled with the team, but no timetable has been given for his return and he’s unlikely to play Thursday against Houston. He’s averaging 24.1 points, 8.9 assists and 8.3 rebounds in seven games.

Thunder: Coach Billy Donovan was hit with a technical as the first quarter ended. George complained about not getting a foul called when he drove to the basket earlier in the period and gave the officials a disgusted wave. ... The winning streak is the second-longest active streak in the NBA, trailing only Golden State (eight).