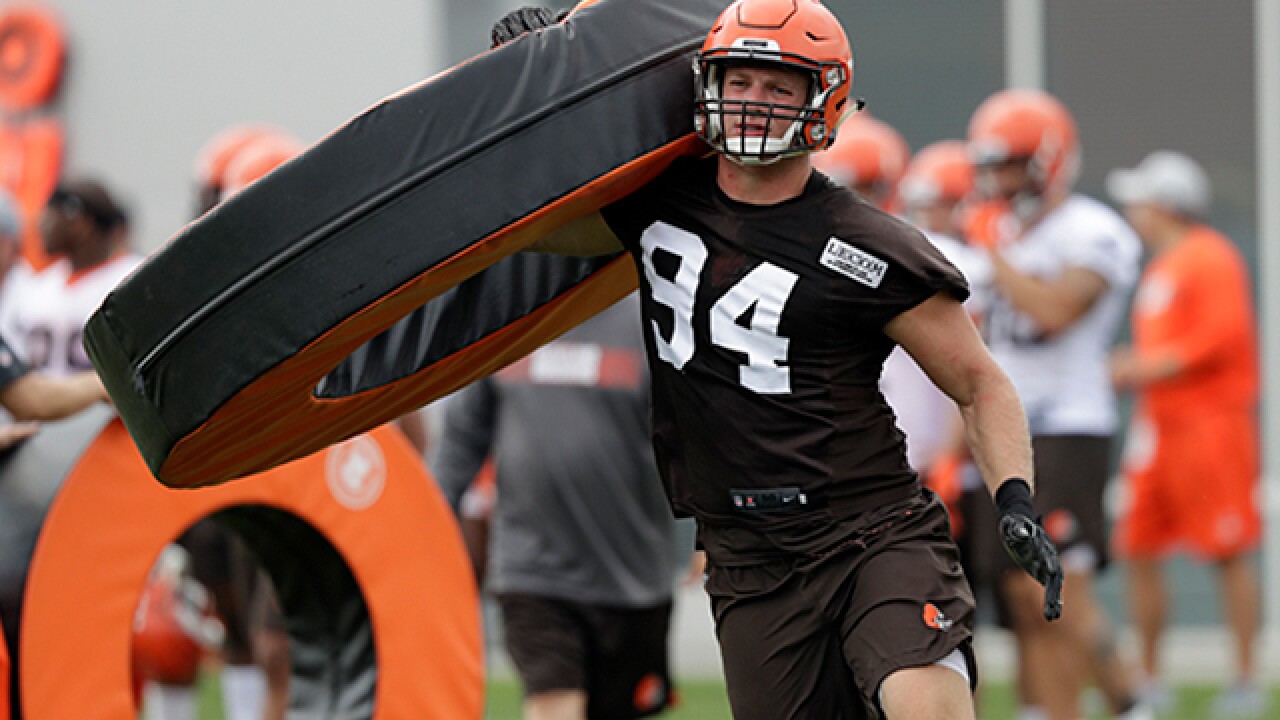 His grandma wants him to clean up his language.

Nassib became a breakout star of the first episode this season of HBO’s “Hard Knocks” series, which is documenting Cleveland’s training camp this summer. In last week’s premiere, Nassib, who has earned a reputation for being outspoken during his three seasons with the Browns, delivered a profanity-laced speech on financial advice to his fellow defensive linemen.

During a few scenes shot inside the team’s meeting rooms, Nassib stood in front of a white board after writing down a math equation he said can help his teammates save money. Nassib emphasized his points by sprinkling in profanity not fit for family viewing.

On Sunday, Nassib said some of the feedback from his appearance has been alarming.

“I’m a little embarrassed about my swearing,” Nassib said sheepishly. “I didn’t know I swear that much. My grandmother was upset with me.”

Nassib said he was prompted to help his teammates with their finances because he didn’t want to see others take advantage of them.

“This offseason, I did a lot of research about finances and stuff like that because I did not study that in college,” said Nassib, who was a biology major at Penn State. “I felt like I wanted to share that with my teammates and the younger guys and help them out because it helped me out a lot.”

Nassib also wanted to clarify a comment he made during the first “Hard Knocks” when he told teammates that they could double their money getting 10 percent interest per year.

The scene left viewers wondering where Nassib could get 10 percent interest.

“I don’t think that anybody is even giving 2 percent interest,” he said. “The way it was edited made it seem like I said that. I was talking about gains on stocks and other investments.”

Nassib also lectured his teammates about spending too much time on Instagram. He warned them if they were on the social media site two hours a day, it would add up to one month every year.

Another amusing scene with Nassib in “Hard Knocks” was when coach Hue Jackson showed Nassib posing with pop superstar Taylor Swift before her recent concert in Cleveland.

Nassib joked with the coach that he had proposed.

So, has he gotten a response?

“Absolutely not,” Nassib said. “She’s way out of my league. Yeah, she doesn’t have time for me.”

Jackson said the TV show may have revealed a side of Nassib most fans haven’t seen, but it’s the guy the Browns know well.

“That is the real Carl Nassib,” Jackson said. “There is no doubt about it. Do not let him fool you. That is who he is.”