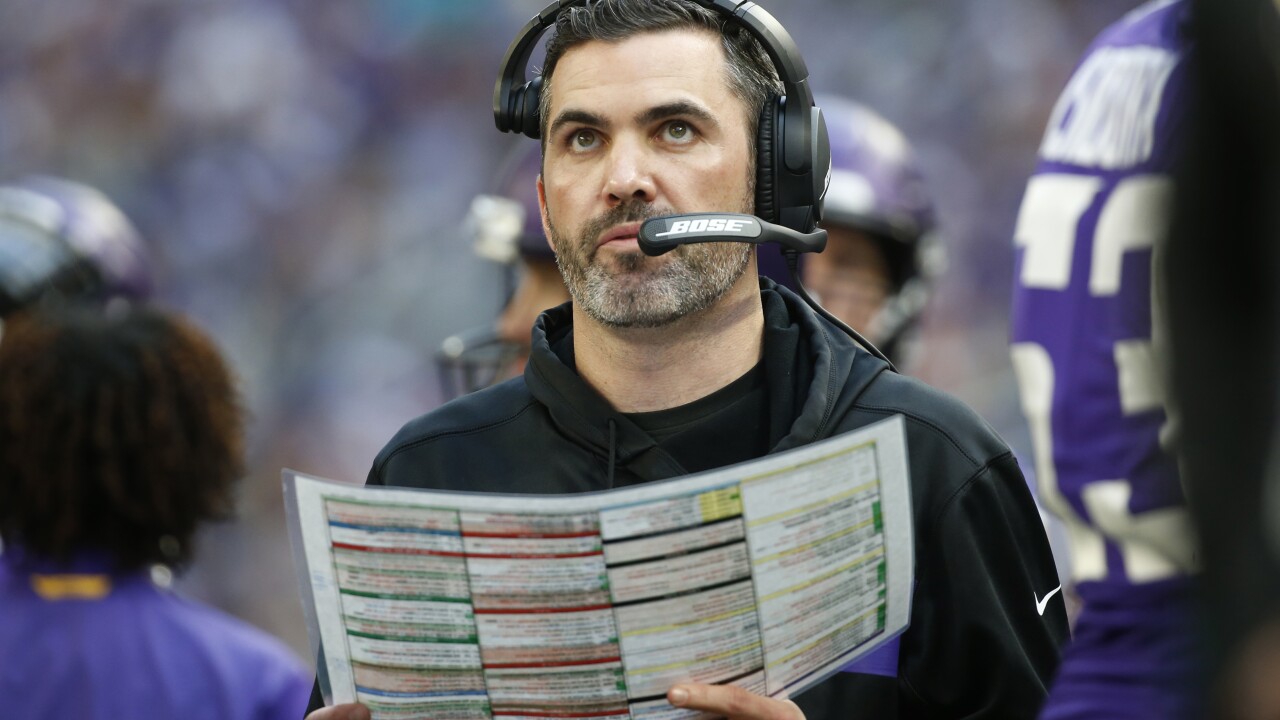 Bruce Kluckhohn/AP
FILE - In this Sunday, Dec. 16, 2018, file photo, Minnesota Vikings interim offensive coordinator Kevin Stefanski watches from the sideline during the first half of an NFL football game against the Miami Dolphins in Minneapolis. With the Carolina Panthers and New York Giants completing coaching hires on Tuesday, Jan. 7, 2020, the Cleveland Browns job vacancy will be the last NFL opening filled. It's still unclear how quickly that will happen. The Browns, who fired Freddie Kitchens after just one season, are in the second week of interviews and have scheduled meetings this week with Patriots offensive coordinator Josh McDaniels and Vikings coordinator Kevin Stefanski. (AP Photo/Bruce Kluckhohn, File)

CLEVELAND — The Cleveland Browns have made it official, Kevin Stefanski will be their next head coach.

Stefanski will replace Freddie Kitchens, who was fired after just one season following the team’s loss to the Cincinnati Bengals on Dec. 29.

“It's very exciting obviously for me and my family,” Stefanski said. “We're really looking forward to moving out here and getting situated in Cleveland and the adventure of it all. From my professional level, I just could not be more eager to get to work with this group. I think we have some really good players here. I think we have some outstanding people in this building. I know we have to add a GM and add some more pieces to this puzzle. I think the eager part for me is to get to work, buckle down and start to put together a program. Before you know it, the players are back in the building and we're going to be putting a system together offensively, defensively, etc. I think that's the fun part, when these guys get back in this building.”

Team owners Jimmy and Dee Haslam said during their search for a head coach they were looking for a smart, strong leader with good football acumen who is a continuous learner and works well within the organization.

"We are thrilled to welcome Kevin as the next head coach of the Cleveland Browns,” Dee and Jimmy Haslam said. “We were looking for a strong leader of this football team, a very bright coach with a high football IQ, who could establish a strong understanding of what he expected of his players, hold them accountable and confidently navigate the challenges and opportunities that present themselves throughout a season. Kevin exemplifies these qualities and more. He has a tremendous ability to relate well and communicate well with his players, has experienced many coaching facets of a team, and understands how to put them in the best position to succeed while also establishing a winning culture. Kevin, Michelle and their family will be tremendous additions to the Cleveland community and we look forward to having him lead our football team."

According to the plan Jimmy Haslam’s laid out in a press conference, Stefanski will help in selecting the new general manager to replace John Dorsey, who the team “mutually parted ways with” at the end of the Browns season.

Whomever Stefanski helps select to be the team’s general manager will have final say on the Browns’ 53-man roster, according to Jimmy Haslam, which could mean some of the faces fans got to know during the course of the season might not be here in 2020.

After the future general manager decides on the final 53-man roster, Stefanski will have the final say on the gameday 46 each week.