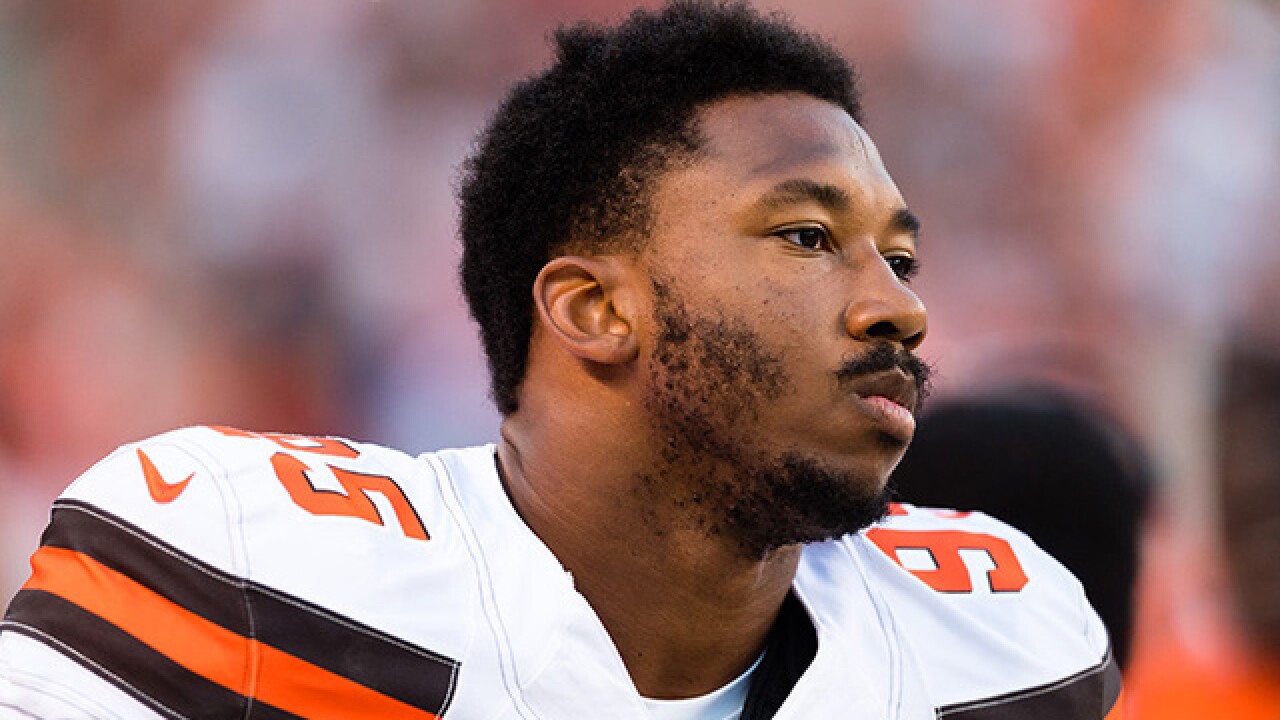 Copyright 2018 Scripps Media, Inc. All rights reserved. This material may not be published, broadcast, rewritten, or redistributed.
Jason Miller
CLEVELAND, OH - AUGUST 10: Defensive end Myles Garrett #95 of the Cleveland Browns prior to a preseason game against the New Orleans Saints at FirstEnergy Stadium on August 10, 2017 in Cleveland, Ohio. (Photo by Jason Miller/Getty Images)

CLEVELAND — During his appeal hearing in New York on Wednesday, Cleveland Browns defensive end Myles Garrett alleged that Mason Rudolph called him a racial slur just before last week’s brawl in the last eight seconds of the game against the Steelers, according to ESPN’s Josina Anderson and Adam Schefter.

In an appeal with the NFL, Browns’ DE Myles Garrett alleged that Mason Rudolph called him a racial slur prior to last week's brawl on Thursday Night Football, sources told ESPN's Josina Anderson and me, an accusation the Steelers’ QB strongly denies.https://t.co/NUQfAJdo6B

"Mason vehemently denies the report of being accused of using a racial slur,” a Steelers spokesman told ESPN's Jake Trotter.

This statement was also tweeted out by sports agent and attorney Timothy Younger:

During media availability on Thursday, Browns defensive tackle Sheldon Richardson said he was unaware of the accusation made by Garrett, but said he wouldn't be surprised if "something had to set him off."

In a post-game interview, Garrett was cagey about whether Rudolph said something that started the fight.

A reporter asked Garrett, "Did Mason say something? Is that what started things?"

After hesitating, Garrett responded: "You just gotta go look at it. I'm not gonna comment on it."

After the brawl, Rudolph said words were exchanged before the on-field fight.

“I got sacked, we exchanged some words, he kept keeping on and one thing led to another," Rudolph said in a post-game inteview. "You can go back and watch the tape if you want and make your own assumptions.”

On Wednesday, Garrett made his case and now it is up to appeals officer James Thrash, a former NFL player. Thrash will also hear the league’s case against Garrett. Thrash will then make a decision to either uphold, negate or reduce the suspension.

Garrett was suspended indefinitely on Friday after getting into a nationally-televised fight with Steelers quarterback Mason Rudolph.

Rudolph said Wednesday there is “no acceptable” excuse for his role in the brawl. Rudolph said he felt Garrett hit him “late” on the next-to-last snap of Cleveland’s 21-7 victory Thursday. Rudolph said he is fine and holds no ill will toward Garrett.

Myles Garrett is appealing his indefinite suspension. So how does the process work?

Myles Garrett's hit on Mason Rudolph was brutal, whether you see it frame-by-frame or in slow-motion