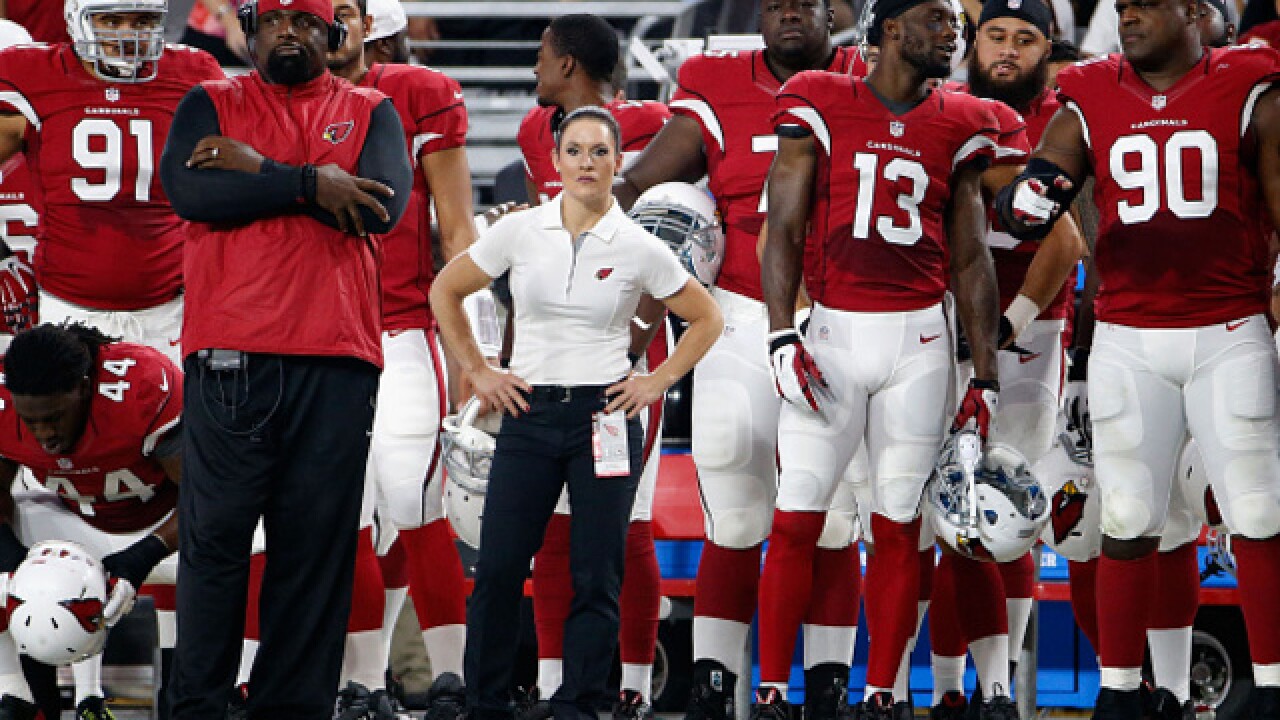 Image copyright 2018 Getty Images. All rights reserved. This material may not be published, broadcast, rewritten, or redistributed.
Christian Petersen
<p>GLENDALE, AZ - AUGUST 15: Intern linebacker coach Jen Welter (C) of the Arizona Cardinals watches from the sidelines during the pre-season NFL game against the Kansas City Chiefs at the University of Phoenix Stadium on August 15, 2015 in Glendale, Arizona. The Chiefs defeated the Cardinals 34-19. (Photo by Christian Petersen/Getty Images)</p>

Will a woman ever be a head coach of an NFL team, and if so, who will it be and when?

After both Browns general manager John Dorsey and former Secretary of State Condoleezza Rice denied ESPN’s report that Rice is under consideration for the Browns' head coaching job, these questions are getting asked right now.

“I didn’t imagine that it was possible,” Welter said. “There were no women I could look at and say, 'I want to be her.'”

Based on the current climate, Welter believes a woman will one day be at the helm of an NFL team, but there is still some work to do before a female is leading a locker room.

“Women are just now really coming into the conversation for coaching football, and now it's becoming an acceptable conversation,” Welter said.

Why so few women coaches?
Barriers are only recently starting to be removed. The most obvious obstacle is that most women did not grow up playing football. Unlike basketball, there is no solid system in place allowing young girls to ascend from children’s leagues to a college program and then to the professional ranks, denying young girls access and opportunity to gain knowledge through repetition on the field.

Welter explained, “I didn’t get to play football until I was 22 years old. I kind of think if I had gotten to play when I was at the same age as these boys I might have been able to take over the world.”

Thanks to women like Welter who are exposing young girls to the sport, girls are getting more chances to play at a young age. However, Welter insists that you don’t need to play football to be able to coach football.

Building a pipeline
Moving through the ranks as a young coach is the most common way to gain experience. Today that path is seemingly possible for women, as organizations have become more open-minded to hiring women on their staffs. As a result, others have followed in Welter’s footsteps, attempting to earn their stripes through lower-level coaching jobs in the NFL.

In 2016 Kathryn Smith became the first woman to be hired as a full-time coach in the NFL. She worked as a special teams quality control coach for the Buffalo Bills. Kelsey Martinez serves as a strength and conditioning coach for the Oakland Raiders. Katie Sowers is as an offensive assistant for the San Francisco 49ers.

“Bruce Arians bet his entire coaching legacy on me,” Welter said. “There had never been a female before coaching in the NFL, and Bruce said, 'You know what? This is the right thing.' And it takes brave people, whether it’s a male or female who is in power, to open doors.”

For a woman to reach the pinnacle of head coaching, people in a position of power will need to open those doors a little wider, hiring women for positional coach and coordinator positions. Women will need mentors who are progressive and fearless.

“I was blessed in my career to have a lot of men who really believed in me and pushed me and allowed me to do things that were traditionally not open to women,” Welter said. "There are really experienced and talented coaches in the NFL who will see the opportunity and the talent and take some of these women under their wing so that will happen.”

When will we see a female head coach?
“I think we need to give it a few years for that depth to establish and for that person to really emerge at the forefront of candidates to be a coach,” Welter said.

And who does she want it to be?

“I would like to see the most qualified woman,” Welter said. "The promise that any first should make is to ensure that you are not the last. You don’t give them a reason to say, ‘This is why a woman can’t do this.’ And part of that is being very good at what you do."

While Welter, along with the fans and media, can only speculate if, who and when there will be a female head coach in the NFL, the trailblazer finds satisfaction that young women today can, at the very least, believe that it’s possible.

Welter said, “Growing up with a  dream of elevating as a coach in professional football is a viable idea, and that's really what’s powerful.”