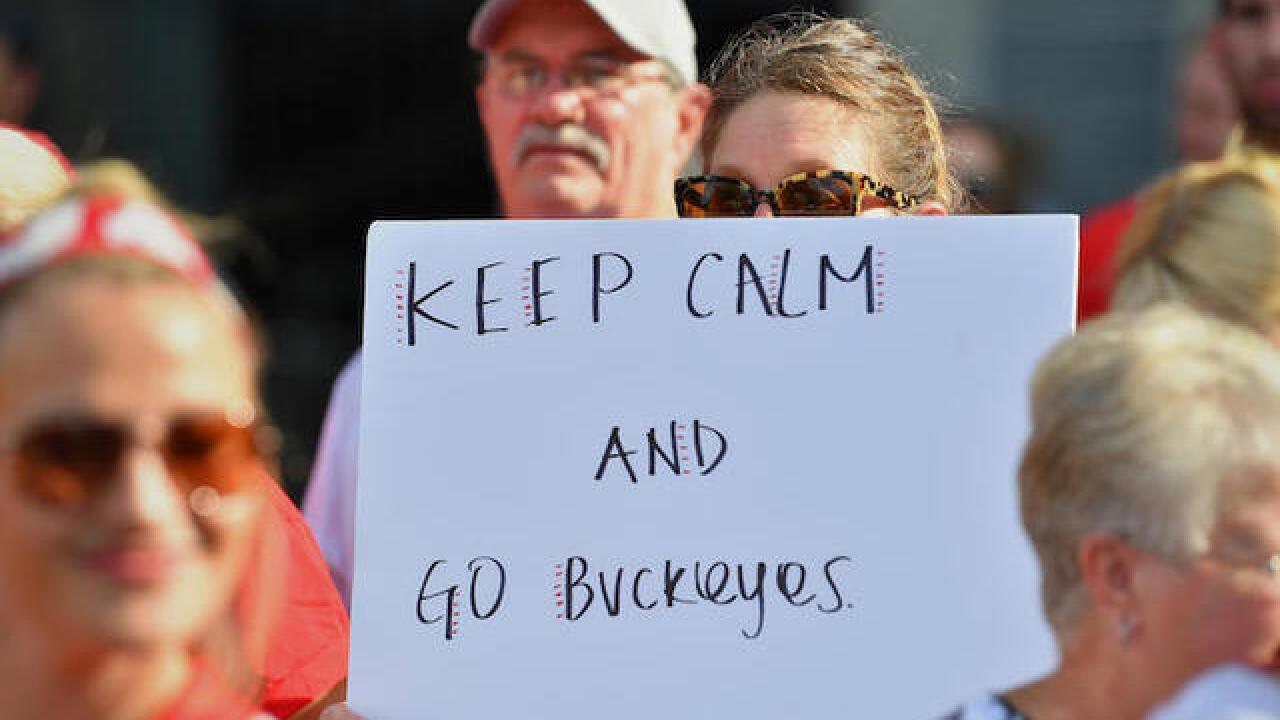 Copyright 2018 Scripps Media, Inc. All rights reserved. This material may not be published, broadcast, rewritten, or redistributed.
Jamie Sabau
<p>COLUMBUS, OH - AUGUST 6: A supporter of Ohio State head football coach Urban Meyer hold signs at a rally at Ohio State University on August 6, 2018 in Columbus, Ohio. Meyer is on paid administrative leave after a reports alleging he knew of a 2015 allegation of domestic violence against former assistant football coach Zach Smith, who was fired in July. (Photo by Jamie Sabau/Getty Images)</p>

Coach Urban Meyer’s future at Ohio State might be in doubt, but the talent level on the field for the Buckeyes certainly isn’t a question.

Ohio State says it hopes to finish up the probe within the week, which would give the team a couple weeks to get used to the new normal before they open against Oregon State (Saturday at noon on News 5) . Coaches and players have been off-limits for interviews, so progress reports have been hard to come by.

But this we know: The Buckeyes have a new starting quarterback, and the Dwayne Haskins Jr. era at Ohio State will start with the same sky-high expectations typical in Columbus. It helps that he is surrounded by a deep, experienced wide receiver corps and a tandem of running backs that might be the best in the nation.
Here are some things to watch with the Buckeyes in 2018:

The major obstacle to Haskins becoming Ohio State’s next starting quarterback was erased when Joe Burrow decided to transfer to LSU after spring practice rather than battle it out with Haskins in fall camp.
Haskins — who already secured his place in Buckeyes lore by winning last year’s Michigan game — takes the keys from four-year starter J.T. Barrett.

The redshirt sophomore is a pass-first, pro-style QB with a rifle arm who brimmed with poise when he spelled the injured Barrett and led Ohio State to a come-from-behind win over Michigan last November.

“He has a little different way of doing it, but he’s earning the respect of our players and our staff,” Meyer said last month.

Defensive end Nick Bosa is looking for the kind of monster year that will keep his NFL draft stock high.

Following his brother Joey, now a star with the Los Angeles Chargers, Nick is one of the top defensive linemen in the sport going into his junior year. He’ll be a first-round draft pick just like his brother, unless something drastic happens.
Part of a ridiculously deep defensive line rotation last year, Bosa didn’t get as many snaps as he would have liked, finishing with 34 tackles and 8½ sacks. With less depth this season, he’ll be on the field more.

Any college coach would be thrilled to have just one of the two running backs who will be featured in the Buckeyes backfield.

Weber was hampered by a hamstring injury for a chunk of last season, which gave Dobbins most of the carries and the chance to shine.

Barrett ate up a lot of the carries that normally would have gone to running backs. With him gone, the workload for the Dobbins-Weber tandem will increase.

All six top pass-catchers from last season return for 2018. Any one of them could have a huge year with Haskins throwing.

Seniors Parris Campbell — last season’s top receiver with 584 yards — and Terry McLaurin are captains and team leaders. Senior Johnnie Dixon and junior Binjimen Victor combined for 15 touchdown receptions.
“We’re going to add to our game vertically,” Campbell said at Big Ten Media Days last month. “We already have an established running game with J.K. and Mike. I think it’s going to be hard for defenses to contain us.”

At home Sept. 1 against Oregon State. If the Buckeyes can put aside the distractions and Haskins performs as expected, they could be a contender for the College Football Playoff after finishing just out of the top four last year.