AP Top 25: Alabama jumps to No. 1 after Clemson close call 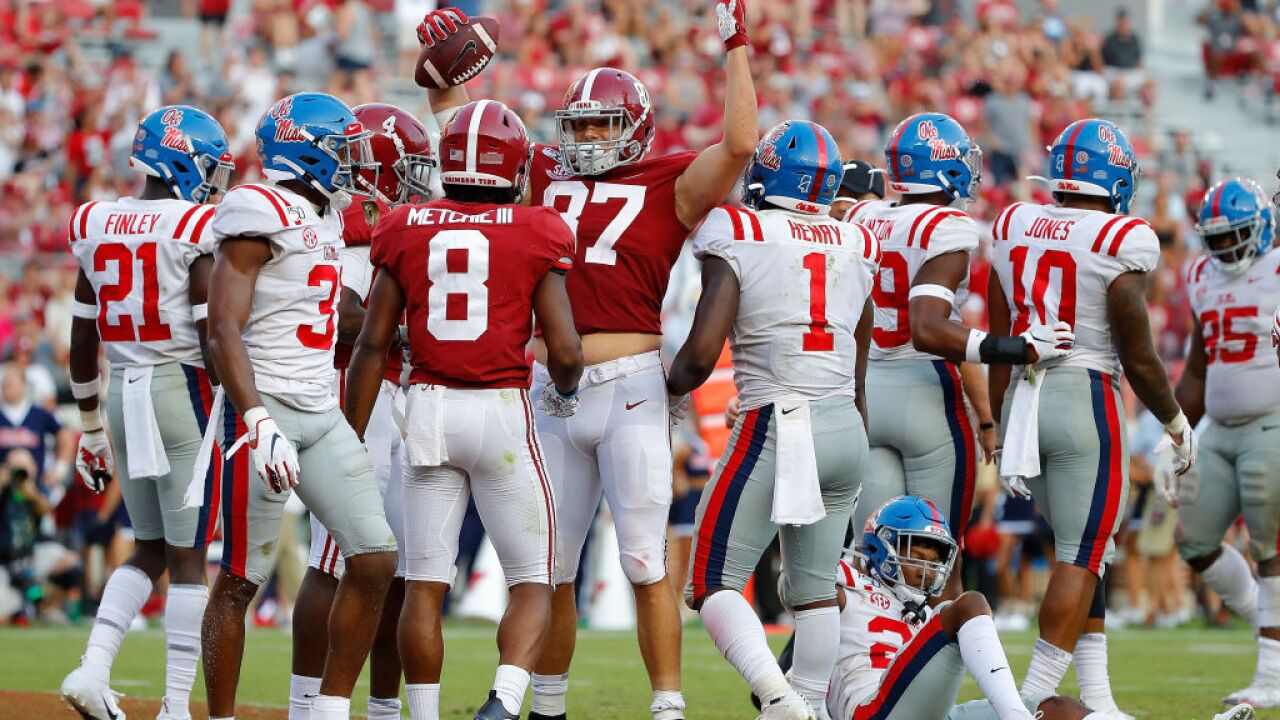 Alabama is No. 1 in The Associated Press college football poll for the first time this season, replacing preseason No. 1 Clemson after the Tigers had a close call.

Alabama received 29 of 61 first-place votes Sunday from the media panel as the Tigers’ one-point victory at North Carolina gave the AP Top 25 presented by Regions Bank the first shake-up at the top this season. Clemson slipped to No. 2 and received 18 first-place votes.

At the other end of the rankings, No. 24 SMU is ranked for the first time since the program received the so-called death penalty for NCAA rules violations in 1987 and did not compete for two seasons.

Alabama has now been ranked No. 1 at some point in each of the last 12 seasons, extending its own record. The second-longest streak belongs to Miami, which had a string of seven consecutive seasons with an appearance at No. 1 from 1986-92.

This is the 119th time Alabama has been No. 1, most of any school since the AP poll started in 1936, and the 88th time it has been top-ranked under coach Nick Saban since he took over in 2007. Only Ohio State, Oklahoma, Notre Dame and Southern California have more total appearances at No. 1 than Alabama has under Saban.

SMU’s appearance in the rankings is historic, considering where that program has been. After returning from the death penalty in 1989, the Mustangs managed one winning season (6-5 in 1997) over the next 20 years.

The program had an uptick under June Jones from 2009-12, going to four straight bowl games and topping out at eight victories. There has been only one winning season since. Under second-year coach Sonny Dykes, the Mustangs are playing their best ball since the Pony Express days of Eric Dickerson and Craig James in the early 1980s. SMU is not a national championship contender, but the Mustangs head into the second month of the season looking like a team that should push for an American Athletic Conference crown.

The next three longest streaks of being unranked among Power Five conference teams are Kansas (2009), Illinois (2011) and Rutgers (2012).

— No. 20 Arizona State retuned to the rankings after beating California at home on Friday.

— Cal took a big tumble, from No. 15 to out of the rankings after its first loss.

— USC is out again after losing at Washington.

— Kansas State had a one-week stay, falling out after losing at Oklahoma State.

Texas A&M is barely hanging on in the rankings. The only two-loss team to be ranked — the Aggies lost to Clemson and Auburn — is tied with Michigan State for the final spot in the rankings.