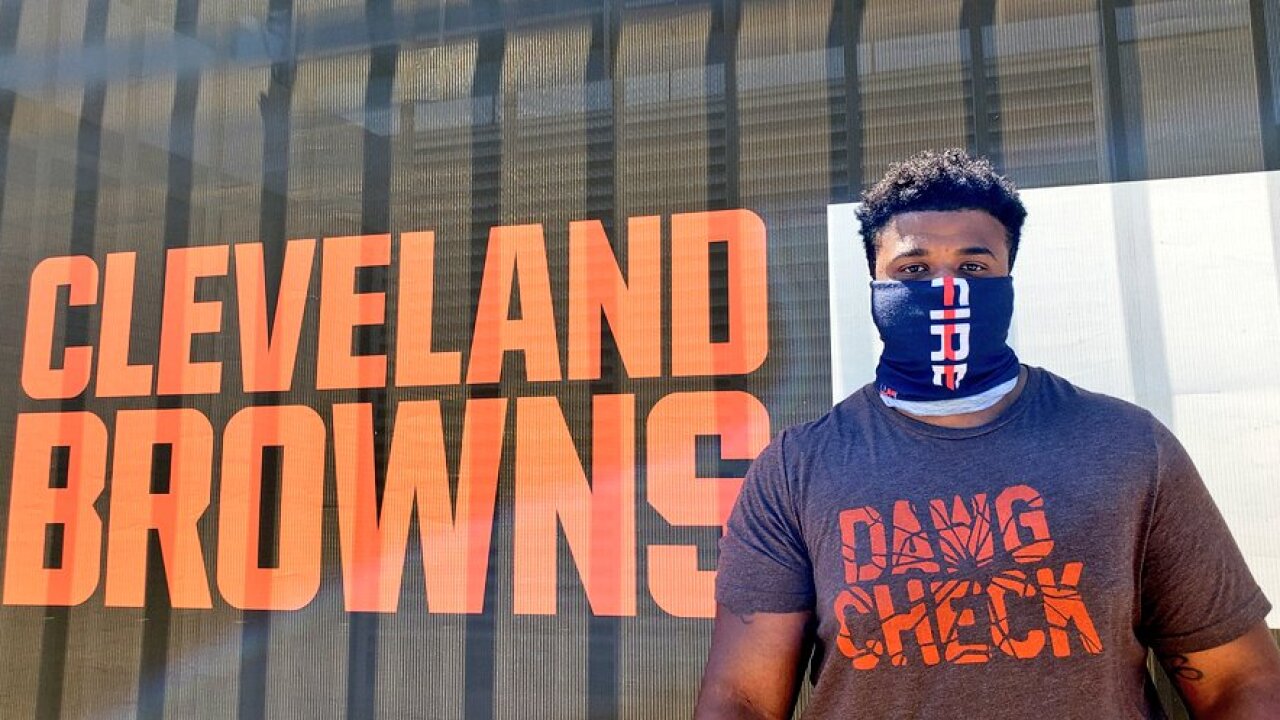 CLEVELAND — After drumming up some noise on social media, Jarvis Courtney, a 26-year-old offensive lineman who currently plays arena football and has set a goal to make it into the NFL, took the next step to getting the attention he needs to reach that goal—traveling to Cleveland for a shot at a workout with the Browns.

Courtney flew into Cleveland Aug. 1 and went straight to the Browns’ training facility in Berea.

“When I landed, it just felt like home,” Courtney said. “I just flew out here hoping and praying for an opportunity to get my shot and make my dream become a reality.”

Courtney met with several Browns fans who are riding with Courtney through his journey, hoping he not only gets his chance in the NFL, but does so with the Browns.

Got the chance to meet @FRANK_TANK_52 tonight, lowkey fan girled a little .. been following his journey. hoping to see him in brown & Orange here real soon 🤎🧡 #browns https://t.co/PbdhSRP31k

Working to not only get the attention of someone in the Browns organization, but also speak his dreams into existence, Courtney traveled around the Cleveland area. From waiting outside the training facility and being given a number to call, to heading downtown and having a jersey custom made with his name on it—Courtney did what he could.

Courtney said his experience in Cleveland only made him want to play in the city even more, thanks to the fans he met who welcomed him in with open arms.

“I didn’t think that many fans were going to push for me,” Courtney said. “Cleveland’s got some loyal fans, I can tell you that. They just welcomed me in with open arms.”

Courtney flew out of Cleveland last week, returning home to his family in Maryland. Unfortunately, Courtney did not get the workout he was hoping for, but that isn’t stopping him from continuing to follow his dreams.

Although Courtney has overcome his fair share of obstacles, with the COVID-19 pandemic changing the structure of NFL training camps he faces yet another hurdle.

“It’d just be another setback, nothing too big,” Courtney said. “If I don’t get a workout [this season] I’ll just continue to workout and stay ready so I don’t have to get ready when I do get my chance.”

Courtney said that even though COVID-19 might have made it more difficult to get a workout with an NFL team this season, fans shouldn’t expect him to give up so easily.

“You’ll be seeing me soon,” Courtney said. “I’d like to have orange and brown on my shoulders.”

RELATED: Tale of an underdog: What one indoor leaguer is doing for a shot at a workout with the Browns