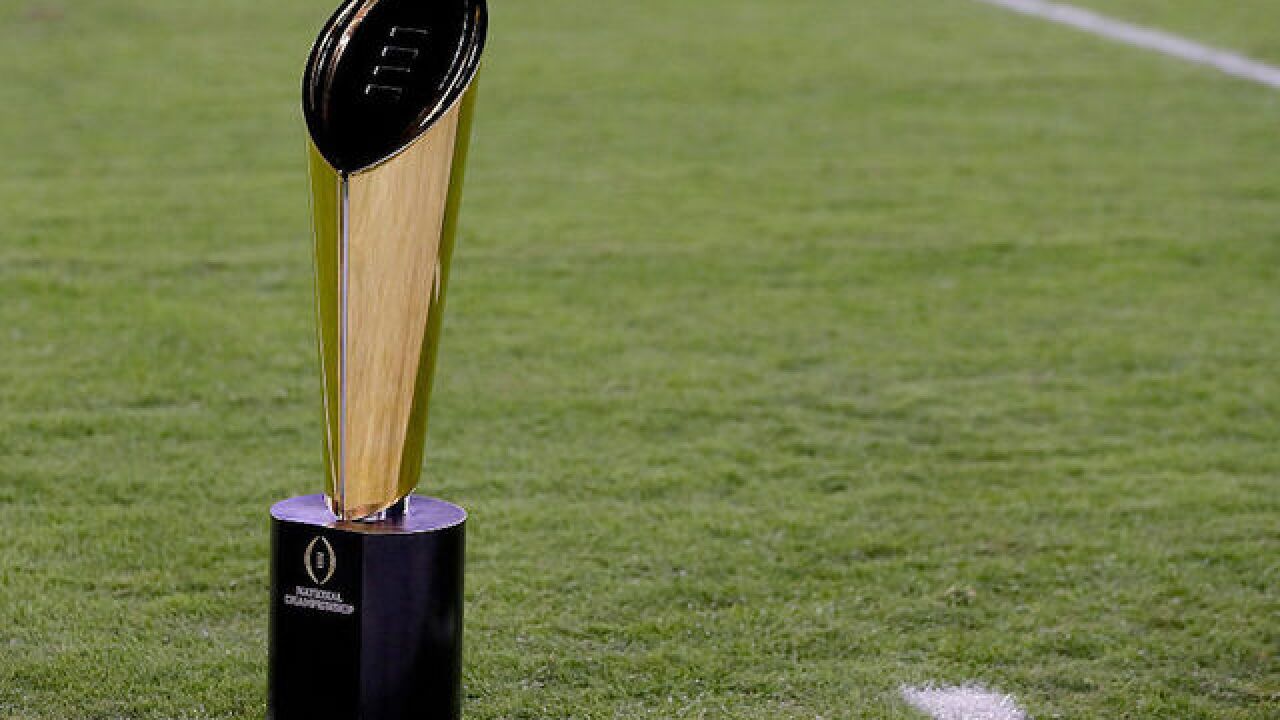 Welcome to your preview of the 2018 College Football Playoff National Championship: This game should be a thriller.

By the time the announcers actually get through the phrase "2018 College Football Playoff National Championship," it will be half over. Let's do this.

What time is it?

What channel is it on?

The game will be broadcast on ESPN, and if you don't have cable, you can catch it on Watch ESPN, the channel's streaming service.

The game will be played at the Mercedes-Benz Stadium in Atlanta, Georgia.

What team usually plays there?

It's the home of the Atlanta Falcons, winners of the 2017 Super Bowl Participation Award.

I thought they played at the Georgia Dome?

They did! But the Georgia Dome was imploded at the end of November, in an event that captured the attention and imagination of literally every single Atlantan within the city limits. If you're ever bored, find a building implosion to go observe. It will change your life.

Even behind the walls of the neighboring CNN Center, one can feel its looming presence.

Anyway, who's playing in this thing?

What schools do these teams represent and where are they?

Do they even still play football in the North?

It's hard to say.

What colors will they be wearing?

Red. Just a lot of red. The Crimson Tide will be wearing white jerseys accented with, you guessed it, crimson. The Bulldogs will be wearing red jerseys with black and white accents.

Tell me more about the matchup!

Both of the teams vying for the championship are from the Southeastern Conference, typically referred to as the SEC. (A conference is one of the ways college football teams are organized. Think of conferences like leagues.)

The SEC connection makes the matchup absolutely thrilling to some, and extremely boring to others. One reason people may find it boring is that the SEC routinely churns out top championship contenders, so it can get a little old seeing the same teams consistently rise to the top. Excellence is so monotonous.

Who are the coaches?

He's an extremely important college football man. He has coached the Tide to four (!) of their 16 (!!!) national titles and as of last year, he was also the highest paid public employee in America. (And yes, opinions differ on how many national titles Bama REALLY has — some say 10 or 13, and it turns out there's not one right answer.)

How many national titles has Georgia won?

How long has it been since Alabama won?

Who are the quarterbacks?

Who's going to win and what are the odds?

As of Saturday morning, experts are going with Alabama by 4 points. And if it comes down to that narrow of a spread this game is going to be an absolute rager.

Can I get tickets?

Well, you can, if you want to spend an entire car's worth of money on them. The lowest-price nosebleed section ticket on Stubhub as of Saturday morning is $1,598. The most expensive ticket is a suite situation that will set you back $87,300.

Sorry, I just died there for a minute. That's a lot of money.

AND you probably won't even get to see the President.

The President is coming?

Oh, yeah. President Trump is scheduled to attend the game, so if you have any plans of driving anywhere around Atlanta, um, don't.

Who should I root for?

It's hard to say. Both Alabama and Georgia are SEC powerhouses and their fan bases literally border each other, but it's not necessarily a rivalry, per se. So if you're a fan of tradition and the status quo, root for Alabama. If you want the city of Atlanta to experience even the tiniest sliver of sports happiness, root for the Dawgs.

What should I say to express my allegiance to these teams?

If you're rooting for Alabama, it's "Roll Tide." Roll Tide is the state motto of Alabama; it's written into the preamble of their constitution. Instead of "good morning," or "I love you," Alabama fans say "Roll Tide." It's every Alabama baby's first words. Its power cannot be understated.

Who has the cuter mascot?

Well, the Alabama mascot is actually an elephant, which is a really cool story. The Bulldogs have -- you'll never guess this -- a live bulldog named Uga (pronounced Ugga) who always looks exhausted.

What's the prize for the champions?

The point of all of this is to be the team to claim that gilded yonic totem, the College Football Playoff National Championship Trophy. It's up there at the top. Here's another look.

Any other fun fact I can think about during Monday's game?

Mercedes-Benz Stadium is home to the largest bird sculpture in the world. The giant stainless steel falcon, grasping a football in its talons, stands (flies?) 41.5 feet tall and weights 73,000 pounds with its pedestal.