Recovery begins after storms that kill 11 in Midwest, South 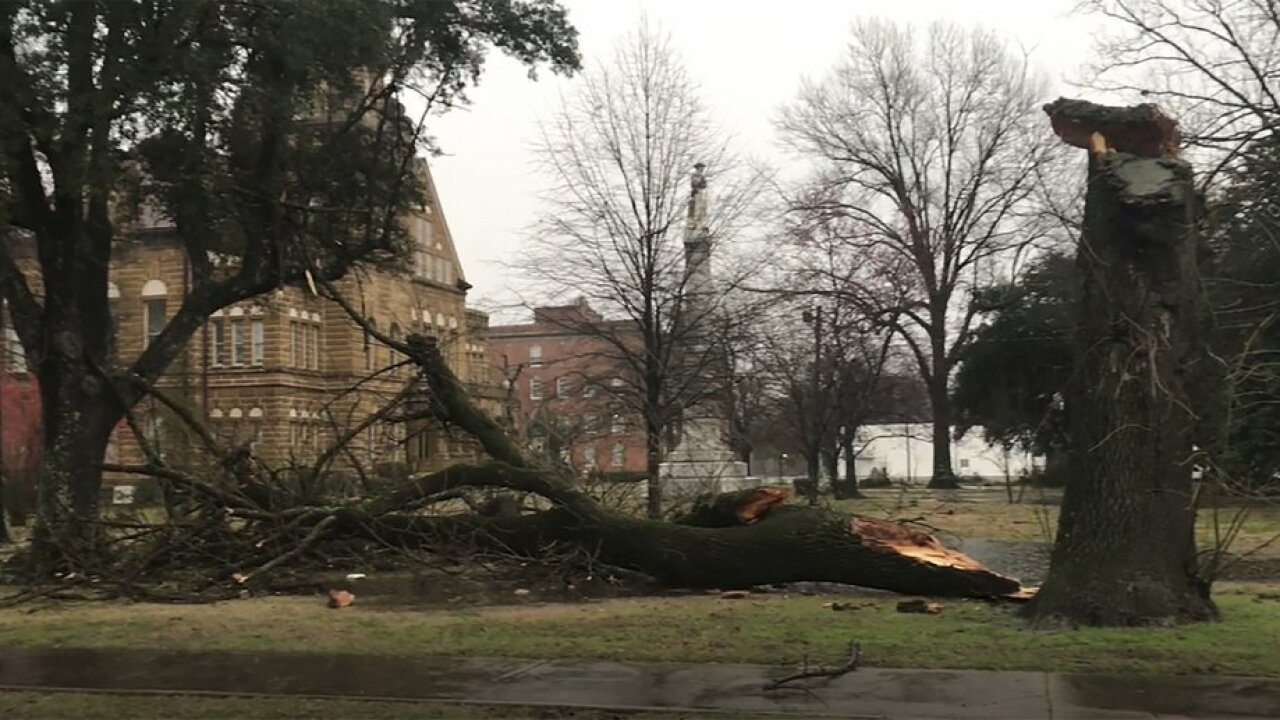 (Copyright 2020 The Associated Press. All rights reserved. This material may not be published, broadcast, rewritten or redistributed.)
In this image taken from video, severe storms sweeping across parts of the U.S. South were blamed for deaths and destruction, Saturday, Jan. 11, 2020, including this toppled tree, near downtown Greenville, Miss. The storms caused high winds, tornadoes and unrelenting rain that battered a large area of the South. (Faith Alford/WABG via AP)

The National Weather Service says it was a tornado packing winds of at least 134 mph (215 kph) that hit Alabama’s Pickens County on Saturday, killing three. Alabama Gov. Kay Ivey praised the state’s first responders Sunday in a statement expressing grief over the loss of life.

“This morning, I have reached out to both the county leadership as well as the legislative delegation to offer my deepest condolences in this terrible loss of life,” Ivey’s statement said.

In northwestern Louisiana, three deaths were blamed on high winds. A man in his bed in Oil City, Louisiana, was crushed to death by a tree that fell on his home early Saturday. A couple in nearby Bossier Parish were killed when the storms demolished their mobile home. The National Weather Service said a tornado with 135 mph winds hit the area.

Icy road conditions were blamed for Saturday deaths in Lubbock, Texas, where two first responders were killed when they were hit by a vehicle at the scene of a traffic accident; and in Iowa, where a semitrailer on Interstate 80 overturned, killing a passenger.

Near Kiowa, Oklahoma, a man drowned after he was swept away by floodwaters, the Oklahoma Highway Patrol said.

High winds and icy weather were factors in power outages affecting tens of thousands of people in the South and the Northeast. The PowerOutage.US website, which tracks outages, reported more than 40,000 outages in New York. More than 28,000 were without power in the Carolinas on Sunday morning.

Entergy Corporation, said its subsidiaries serving Arkansas, Louisiana, Texas and Mississippi had roughly 19,000 customers without power Sunday morning. While most were expected to be restored later in the day, some in areas of Arkansas and Mississippi with extensive damage might take longer, said spokeswoman Lee Sabatini.

“They have had extensive infrastructure damage,” Sabatini said of the two states.