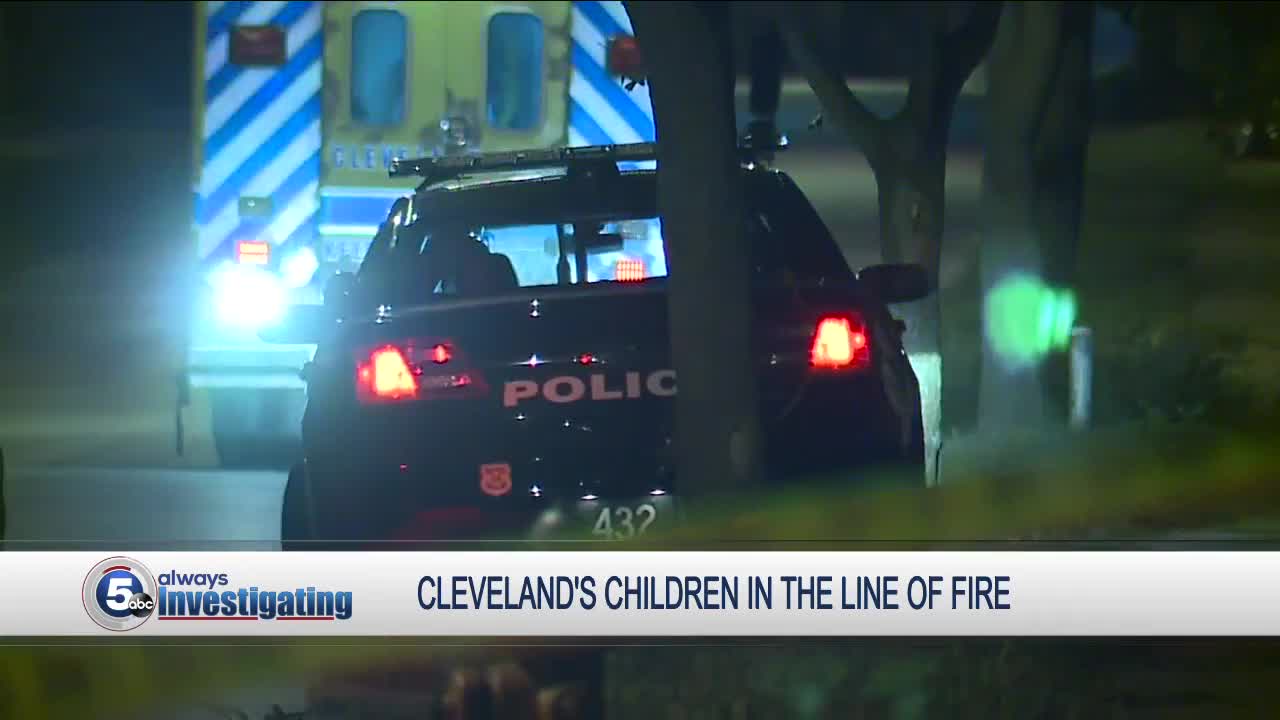 Amid the fatal shooting of 6-year-old Lyric Lawson over the weekend, Cleveland city leaders are again grappling with possible solutions and policy changes when it comes to gun violence. 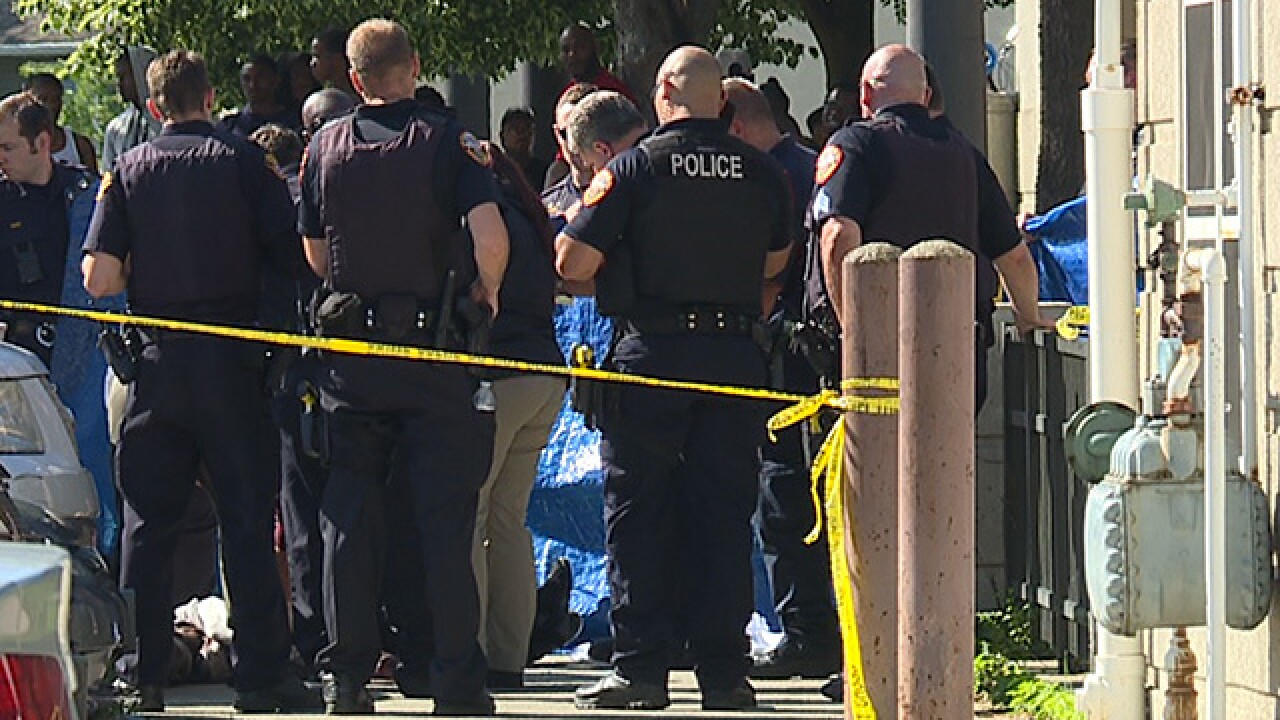 CLEVELAND — Public safety and crime have been and likely always will be one of the most vexing and resource-focused challenges facing the City of Cleveland, hence the reason public safety comprises a massive portion of the annual budget. However, amid the fatal shooting of 6-year-old Lyric Lawson over the weekend, city leaders are again grappling with possible solutions and policy changes.

Early Saturday morning, a suspect or suspects opened fire into a home on East 171st St., propelling more than a dozen rounds that tore and chewed through the siding, insulation and drywall with impunity. Inside, Lyric Lawson, a pure and affable six-year-old, lay sleep next to her siblings.

Witnesses reported seeing a dark colored sedan fleeing from the scene of the shooting, prompting city leaders, including Mayor Frank Jackson and Police Chief Calvin Williams, to stand atop the steps of city hall, urging the public to come forward with information. Visceral and raw, the emotions that a city feels when a child is killed have been felt by Cleveland’s residents and leaders before and recently, in fact.

In July 2018, Saniyah Nicholson sat in her mother’s car eating ice cream when two warring groups began firing indiscriminately – in broad daylight no less – in the middle of a busy shopping district. Nicholson was pronounced dead later that night. Nine months prior, 12-year-old Abdel Latif Bashiti was killed outside his father’s beauty supply store on Buckeye Road when he was caught in the middle of sparring factions of teens and young adults with guns. In October 2015, an infant riding in a car with her family was fatally shot. A month before that, a 5-year-old boy named Ramon Burnett was fatally shot in a drive by. Nine days prior to Ramon’s death, 3-year-old Major Howard was sitting on a woman’s lap inside a car on East 113th Street when he was hit and killed by gunfire.

Following Lawson’s death over the weekend, News 5 submitted public records requests for the dates, times and locations of all felonious assault with a firearm reports thus far in 2019 and for the year 2018. The goal behind the request to get both a macro and micro view of gun violence in the city.

Over the past four years, there have been an average of 769 reports of felonious assault with a firearm. It is important to note, however, that not every case resulted in someone being injured or hit by gunfire.

News 5 then compiled the times, dates and locations for the felonious assault with a firearm cases in 2018 and 2019 and input the values into a heat map and scatter plot map, providing a ‘birds eye view’ of gun violence in the city. The heat map variant of the data illustrates the frequency and proximity of the reported felonious assaults, denoted by white ‘hot’ color.

Although a vast majority of the data provided to News 5 by the police department’s statistical analysis unit contained approximate locations of each reported case, some of the cases contained just the street name, possibly due to the fact the incident involved a moving vehicle.

The heat maps in 2018 and 2019 highlight pronounced pockets of gun violence on both sides of the city. However, the number of reported felonious assault with a firearm cases is more frequent on the city’s eastern half.

Councilman Basheer Jones (Ward 7) said the heat map reaffirms the need to address the challenges certain neighborhoods face. However, the data also highlights how crime and, particularly, gun violence stems from other societal and economic issues. If the heat map were to have an overlay of poverty levels or large amounts of lead poisoning amongst children, Jones said the maps would look largely the same.

“No bomb is more dangerous than people that are hopeless,” Jones said. “If you look at the what, you’re going to think these communities are war zones and the people who live there are terrible people. If you look at the why, it will give a different answer.”

Over the decades, many of Cleveland’s eastern neighborhoods have long dealt with issues of disinvestment, discrimination, poor health outcomes, food insecurity and housing insecurity. Jones said the root of crime stems from these issues.

“These issues are multi-faceted,” Jones said. “We have to be able to work with young people within the community, invest in our recreation centers but also work with bank presidents in saying you have to do a better job of investing in the community that you are in.”

In addition to providing a heat map of gun violence throughout Cleveland, News 5 also compiled a scatter plot map, showing the incidents on a more granular level.

Below is a scatter plot map of the 2018 reports of felonious assault with a firearm.

While the number of reported felonious assault with a firearm cases have somewhat remained the same over the past four years, the Cleveland Division of Police reports significant improvements to the overall violent crime rate and serious property crime rate.

According to analysis provided to the City Council earlier this year, serious property crimes like burglary and theft in 2018 were down 23 percent compared to 2017 and about 30 percent from 2016. Violent crime was nearly 15 percent lower in 2018 than in 2017 and roughly 19 percent lower than in 2016. At the time, Chief Calvin Williams pointed to an expanded number of officers on the street, greater levels of engagement and expanded youth programs as reasons for the decreases.

Despite the apparent improvements, city council members and Mayor Frank Jackson will be the first to admit more progress needs to be made.

“The buck stops right here at this table. Each and every elected official that sits here in this committee right here is responsible,” said Councilman Joe Jones (Ward 1). “If we don’t stand up and start talking about the bloodshed and the death that is happening in this neighborhood and how to stop the hemorrhaging, we’re culpable to it.”

Although the Safety Committee’s agenda did not specifically detail any legislation regarding Lawson’s death over the weekend, much of the conversation centered around her slaying and the other homicides and gun violence gripping parts of the city.

“I had a community meeting last night where all they talked about is how they wanted me to solve crime and murder. I told them I’m a council person. I’m not a police officer,” said Councilman Blaine Griffin (Ward 6). “But these folks expect us to advocate for them at this table.”

When shown the heat and scatter plot maps, both Councilman Joe Jones and Councilman Mike Polensek reacted to the data with both empathy and affirmation. Both council members said the data leads them to believe that additional law enforcement officers are needed to patrol the city’s neighborhoods and there needs to be a greater level of traffic enforcement as a way to gather intelligence on criminal activity.

“We need an additional 200 police officers. I will be supporting those candidates who are running for public office in the future who are saying we’re going to work to get more police officers on the ground,” Councilman Jones said. “If the city is going to be serious about improving the conditions of a community and a neighborhood, about getting more population back, about being able to be serious in how we approach things, then we must have a police department unleashed, out there in the streets, doing their jobs.”

As one of the longest-serving members of the council, Councilman Mike Polensek said he has witnessed first-hand the impact society’s ills have had on the once proud, middle class neighborhoods on the East Side.

At the press conference Monday afternoon following Lyric Lawson’s death, Mayor Frank Jackson and other city leaders implored the public to come forward with information and cooperate with police. When meeting with reporters, Major Jackson stressed that his administration has undertaken several initiatives to fight crime and, specifically, violent crime. Major Jackson’s administration has implemented summer job programs for the city’s youth and installed specially-trained counselors at the city’s recreation centers to help youth with the effects of toxic stress. Additionally, the city is roughly six months into a multi-year, multi-phase project that will bring upgraded LED street lights to the city’s neighborhoods as well as the installation of 1,000 security cameras.

News 5 reviewed and compiled additional data on firearms in city limits. The graphics below show the times and days of the week with the highest number of reports of felonious assault with a firearm.