The Rock & Roll Hall of Fame announced Tuesday the 15 nominees for induction into the 2019 Rock Hall class.

This group will include some familiar faces, as nine of the 15 artists have been nominated before.

For six of the artists, it's their first time on the nomination ballot.

Returning as nominees are:

To be eligible for nomination, an artist or band must have released its first commercial recording at least 25 years prior to nomination.

Fans get another opportunity to weigh in on the induction selection process. Beginning Oct. 9 through 11:59 p.m. on Dec. 9, fans can visit RockHall.com to cast their votes for who they believe should get inducted.

Fans can also cast their vote at the museum using the Voice Your Choice interactives next to the 2018 Inductee exhibit. 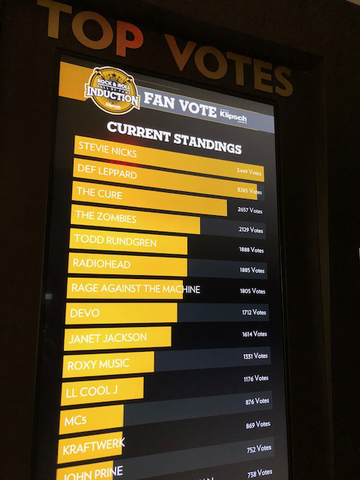 </p><p><strong>Fans started casting their votes for who they want to see inducted into the 2019 Induction Class. Photo: Dave Kraska.

Inductees will be announced in December 2018.