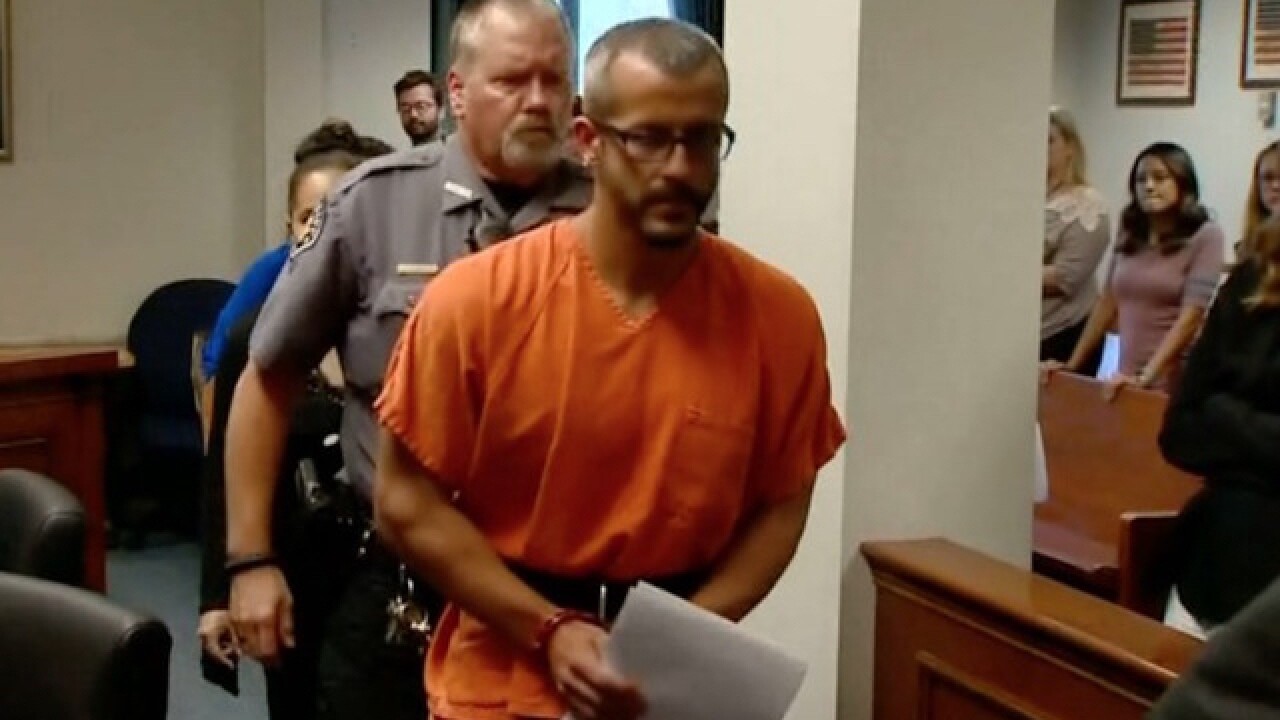 Copyright 2018 Scripps Media, Inc. All rights reserved. This material may not be published, broadcast, rewritten, or redistributed.
KMGH
<p>Chris Watts, 33, of Colorado, is seen in court Aug. 16, 2018. Watts is charged in the deaths of his pregnant wife, Shanann, and two young daughters.</p>

DENVER, Colorado – One of the many questions surrounding the killings of a pregnant Frederick woman and her two daughters that people have asked is why Chris Watts isn’t being investigated for murder charges in the death of his and his wife Shanann’s unborn child.

While Watts, 33, likely will not be formally charged in connection with the deaths of 34-year-old Shanann Watts and their daughters, 3-year-old Celeste and 4-year-old Bella, until at least Monday, he faces investigation on one count of first-degree murder after deliberation; two counts of first-degree murder – position of trust; and three counts of tampering with a deceased human body.

High-ranking law enforcement sources tell KMGH television station Watts confessed to the killings and that the bodies of the two girls were found inside oil and gas tanks in Weld County. The body believed to be Shanann was discovered nearby, authorities said Thursday.

Shanann was 15 weeks pregnant when she was killed, which has again inflamed discussion of whether an unborn child’s death should lead to murder charges.

There are 38 states that have fetal homicide laws on the books, according to the National Conference of State Legislatures, though Colorado is not one of them. However, Colorado does have several criminal statutes that apply specifically to crimes committed against pregnant women.

Perhaps chief among them is the state’s “unlawful termination of a pregnancy” statute, which is a class 3 felony.

The most high-profile case in which the charge was used was the trial of Dynel Lane, who was convicted on the charge as well as attempted murder and other charges in 2016 after she cut the fetus from a Longmont woman’s womb a year earlier. In that case, the baby died but the mother lived.

Stan Garnett was the Boulder County District Attorney at the time and oversaw the prosecution of Lane. Now an attorney with Denver-based Brownstein Hyatt Farber Schreck, Garnett is one of the top experts on how Colorado deals with deaths involving unborn children.

He talked about the statute in an interview with Denver7 Thursday, discussing how it could be used in the Watts case and explaining why it would be difficult for Weld County prosecutors to file a murder charge related to the unborn child in the case.

“Under both Colorado statute as it’s interpreted by the Colorado Supreme Court and Colorado case law unless a child is born alive and is then killed after living independently from the mother, it’s virtually impossible to bring a homicide charge,” Garnett said.

He said that it seems extremely unlikely a fourth murder charge would be filed should prosecutors go that route.

“I don’t know the fact patterns of the case, but it will be virtually impossible to file a murder charge in connection with the death of the unborn child,” Garnett said. “Colorado requires that the child live outside of the mother’s womb independently and then be killed as a result of something that occurs then.”

But he said that the prosecutor overseeing the Watts case, Weld County District Attorney Michael Rourke, is an “excellent” DA and that he believes that it’s possible that unlawful termination of a pregnancy charges are brought against Chris Watts.

“If, in fact, the facts are the baby was killed in the womb of the mother due to action of the defendant, if that facts support that, then I would not be surprised if there’s an unlawful termination of a pregnancy claim brought,” Garnett said.

After Lane was convicted in the fetal abduction case and sentenced to more than 100 years in prison, some state lawmakers tried to pass a law that would have classified the killing of a fetus as a homicide in certain cases, but the bill failed, mostly over concerns that it infringed on women’s reproductive rights.

Garnett said that the emotion surrounding such bills and the politicization of the issue has made it difficult for lawmakers to agree. He himself says he doesn’t think a fetal homicide law is necessary in Colorado. State voters handily defeated a “personhood” measure that made the 2014 ballot 65 percent to 35 percent.

“In my view, we don’t need a fetal homicide issue. In fact, the statutes we have work pretty well,” he said. “The issue, of course, is these statutes implicate issues around a woman’s right for reproductive freedom. And trying to fashion a statute that will deal with what we all believe needs a criminal penalty without impacting the constitutional right to choose is very difficult and very emotional.”

Garnett said he thinks the unlawful termination of a pregnancy low “does a pretty good job of threading the needle.”

He said that while reviewing evidence in the Lane case, he received at least 5,000 emails from all over the country discussing homicide charges. And he said that he believes Rourke is likely under pressure from people and groups across the country over the same issue.

“I’m sure the DA in Weld County now, as he’s reviewing the evidence, is getting similar input from the public,” Garnett said. “The reality is a district attorney doesn’t charge a case based on public outcry, he charges it based on what the evidence is and what the law is.”

For more on what we know so far about the Watts family murders, click here.