Copyright 2017 Scripps Media, Inc. All rights reserved. This material may not be published, broadcast, rewritten, or redistributed.
Alex Farmer
By: Kaylyn Hlavaty
Posted at 10:38 AM, Jan 26, 2018

Clevelanders know all too well how good the city's eclectic food scene is, and now the rest of the country will see it, too.

The Travel Channel's 'Food Paradise' is filming in Cleveland this week, making stops at Cleveland's most recognized restaurants.

Hey #Cleveland - Come be a part of the taping of Travel Channel's Food Paradise this Sunday, January 28th from 11a-2p. pic.twitter.com/AZ5ZLlYJWz

From downtown to Cleveland's historic Tremont district, 'Food Paradise' will also film at Rocco Whalen's restaurant, Fahrenheit on Saturday night, so if you want to be featured in the taping, make a reservation. 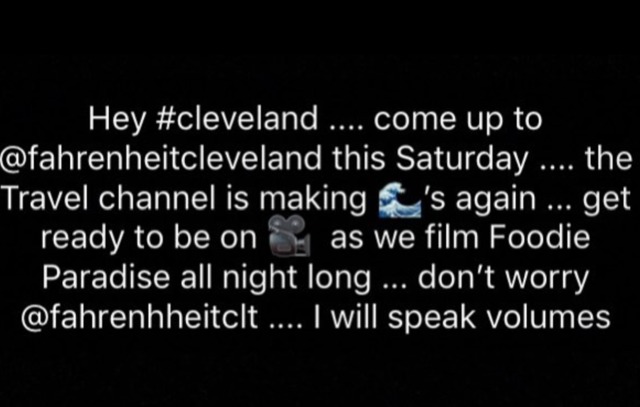 The Travel Channel was at Hofbrauhaus on Thursday filming for a segment. The channel hasn't revealed what food will be featured in the episodes, but one thing that is for sure—every dish will be good enough to eat.

If you've ever wanted to be on TV now's your chance! @travelchannel will be at @HofbrauhausCLE tonight filming Food Paradise. 🎬 pic.twitter.com/eAnEI49ylC