Cleveland demolished vacant homes near public schools, but not near private schools 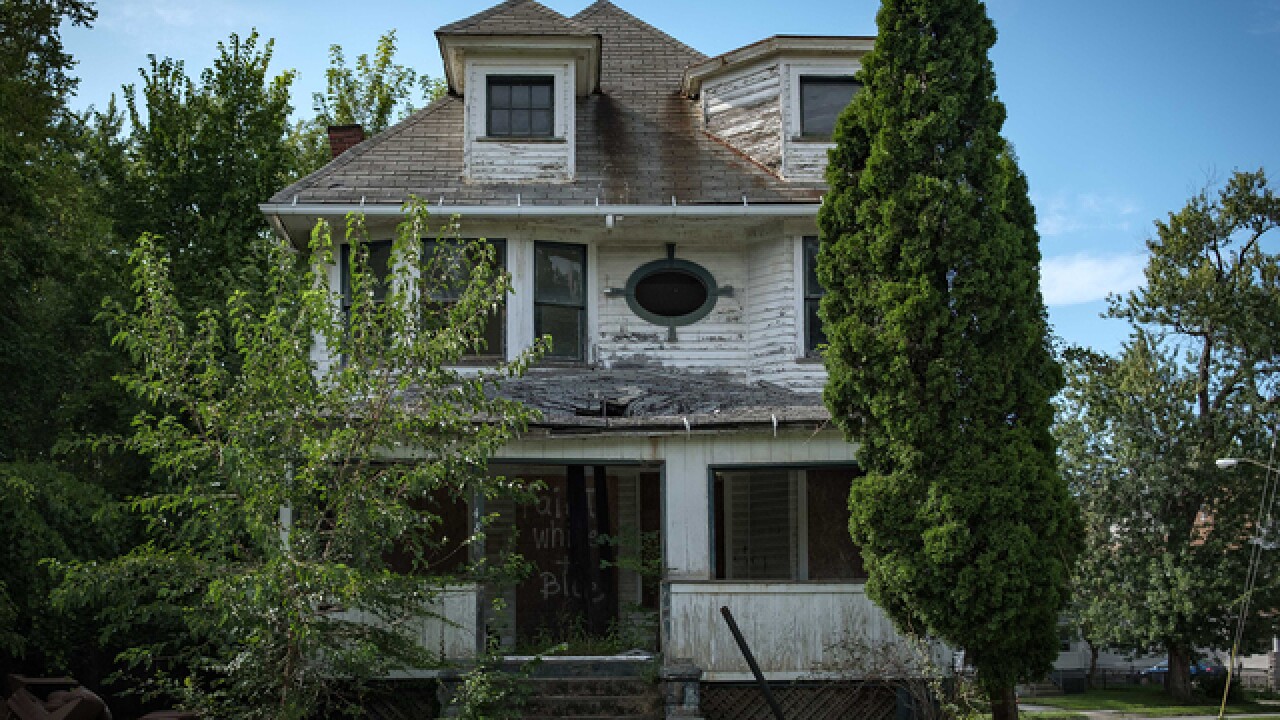 Copyright 2018 Scripps Media, Inc. All rights reserved. This material may not be published, broadcast, rewritten, or redistributed.
<p>Abandoned home at 1448 Crawford Road. (Photo by Drew Scofield.)</p>

The Safe Routes to School program was first unveiled in May of 2017 by Mayor Frank Jackson, who announced a goal to “tear down 500 homes within 500 feet” of Cleveland Metropolitan K-8 schools by the end of 2017. City officials underscored the goal in official news releases , Facebook posts/livestreams , online videos and city blog posts prior to Jackson’s re-election.

Instead, through visual inspections and analyzing city records, our investigation in 2017 found the vast majority of vacant homes were still standing and children remained at risk near hundreds of them.

Now, 16 months later, the city has made progress. Properties at 599 individual Safe Routes locations – or at least 830 total structures – have been demolished, according to city records as of Aug. 29. This includes homes, garages, sheds, apartments and commercial buildings.

In addition, under a separate, city-wide demolition program, city data shows 10,000 vacant structures have been torn down since Jackson took office in January 2006.

But for children who walk to private schools, vacant homes remain a threat. Our analysis found the city has not razed any abandoned properties near the approximately 30 private schools in Cleveland, and some parents, as well as a local principal and council member, are questioning why.

Five of the eight elementary schools in Councilman Michael Polensek’s Ward 8 are private.  Because vacant homes near private schools were not targeted in the program’s early stages, he said children who walk to these schools are still at risk.

“Those parents are taxpayers, too,” Polensek said. “If [these homes are] not on the Safe Routes plan, they’re not included for demolition.”

Susan Coan, principal of St. Jerome Elementary – a private Catholic School in the Collinwood neighborhood – said she’s talked to her students about the presence of abandoned homes, and their responses worry her.

But Rachel Meeks said that didn’t stop a mother’s fears.

“The thing that scares me the most is that somebody can drag them into a house and you won’t know,” she said. “You won’t hear about it until hours later.”

This is what happened in the tragic case of 14-year-old Alianna DeFreeze , who was abducted on her way to school on Jan. 26, 2017 and was later found dead in a vacant home. Her death prompted the city’s goal to tear down hundreds of homes as part of the Safe Routes program.

In March, a body was found inside a vacant home on the city’s east side.

“You never know what’s lurking,” Rachel Meeks said. “[People] use these empty, abandoned homes to do their crime. Kids shouldn’t have to deal with it.”

The walk to school

Antonia Meeks said it took her about 20 minutes to walk her sister to and from St. Jerome, and she sees a handful of vacant homes on her route.

“It keeps you panicking a little bit because you have to watch your back,” she said. “You have to turn around and make sure nobody’s following you. You don’t know who or what is going to jump out from behind the vacant buildings.”

There are six vacant homes near St. Jerome that children walk past every day.

Rachel Meeks believes “it’s just unfair” and “not reasonable” that vacant homes near private schools have not been a focus of the Safe Routes program.

“Safety is important no matter what,” she said. “It should never matter if a child is going to a public school or charter school or Catholic school. If their safety is in question, then something needs to be done about it.”

Cassandra Dotson, who has a fourth grader and an eight grader who attend St. Jerome, walks her kids to school every day – in part because she fears them walking by vacant homes alone. On their route, she said she sees the open structures.

“My biggest fear with these abandoned houses is someone can pick my babies up, take them in there [and] we would never know,” Dotson said. “Any school – private, public school – all kids should be safe.”

Why no progress on private schools?

Edward Rybka, Cleveland’s Chief of Regional Development, said although the program initially started with tearing down vacant homes near Cleveland public schools, the city planned for the private and charter schools to be a part of the program since it began.

“It was never our intention that those schools would not be included in the Safe Routes Program,” Rybka said, adding that the city was “just unveiling the process” in May of 2017, and the program was continuing to evolve.

We spot checked a sample of the vacant homes on the city’s Safe Routes demolition list. Out of the 60 locations we visited, we found 11 homes still standing that were designated for demolition by the end of 2017.

When asked, Rybka could not pinpoint a specific reason for why the city has not already torn down some homes that were slated for demolition last year.

However, he said various factors could impact the demolition schedule. He said it’s common for property owners to file legal action that halts a demolition process from taking place, slowing the process, for example.

Rybka also said the city is now targeting homes that are within 1,000 feet of any school instead of the original 500 feet.

After we brought our findings and residents’ concerns to the city, officials said one of the vacant homes near St. Jerome is now on contract for demolition. The city has also committed to either boarding up, inspecting and/or reviewing for inclusion the five other nearby vacant homes as part of the Safe Routes program.

City records show 326 additional vacant homes across the city have either been contracted or identified for demolition.

“Our children play here,” Coan said. “They’re here every day. And across the street is a house that’s boarded up. They shouldn’t have to run past houses on the way home or in the morning to get to your school.”

“Safety is about everybody,” Meeks added. “Not just who goes to what school.”

We’ve created an interactive page where you can tell us about how abandoned homes are affecting your community. Are there any near your child’s school? Click here.