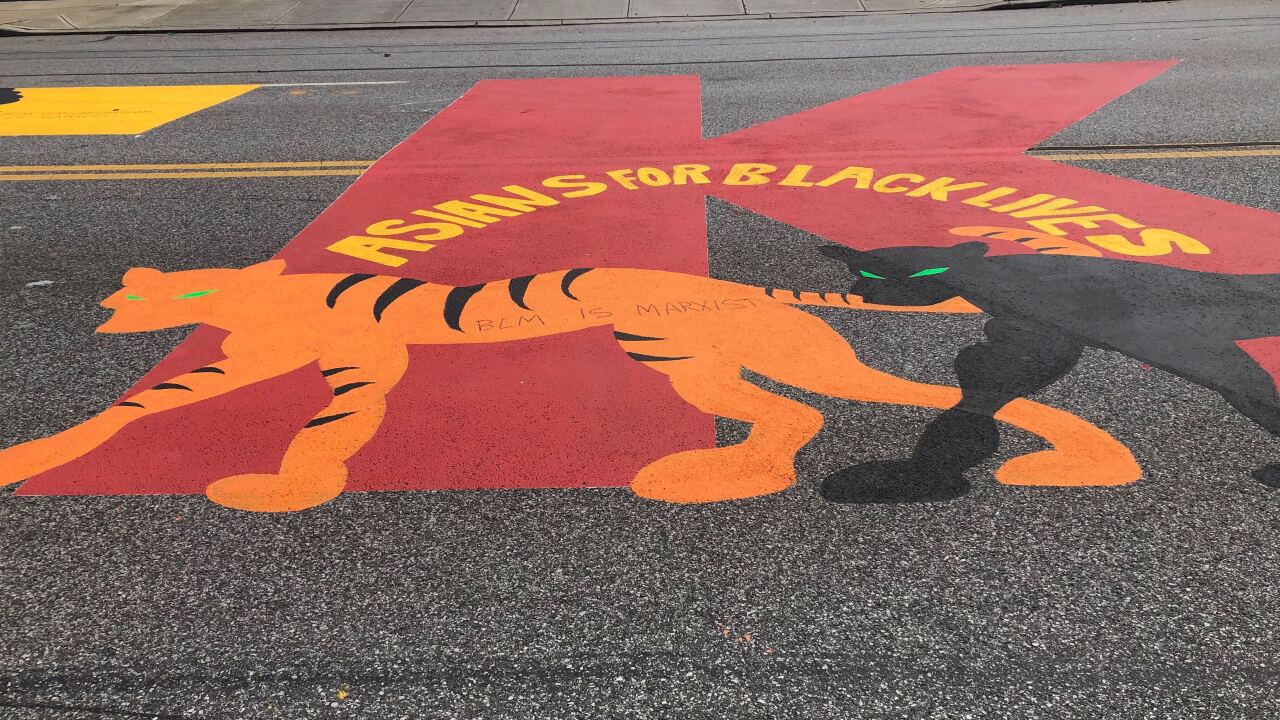 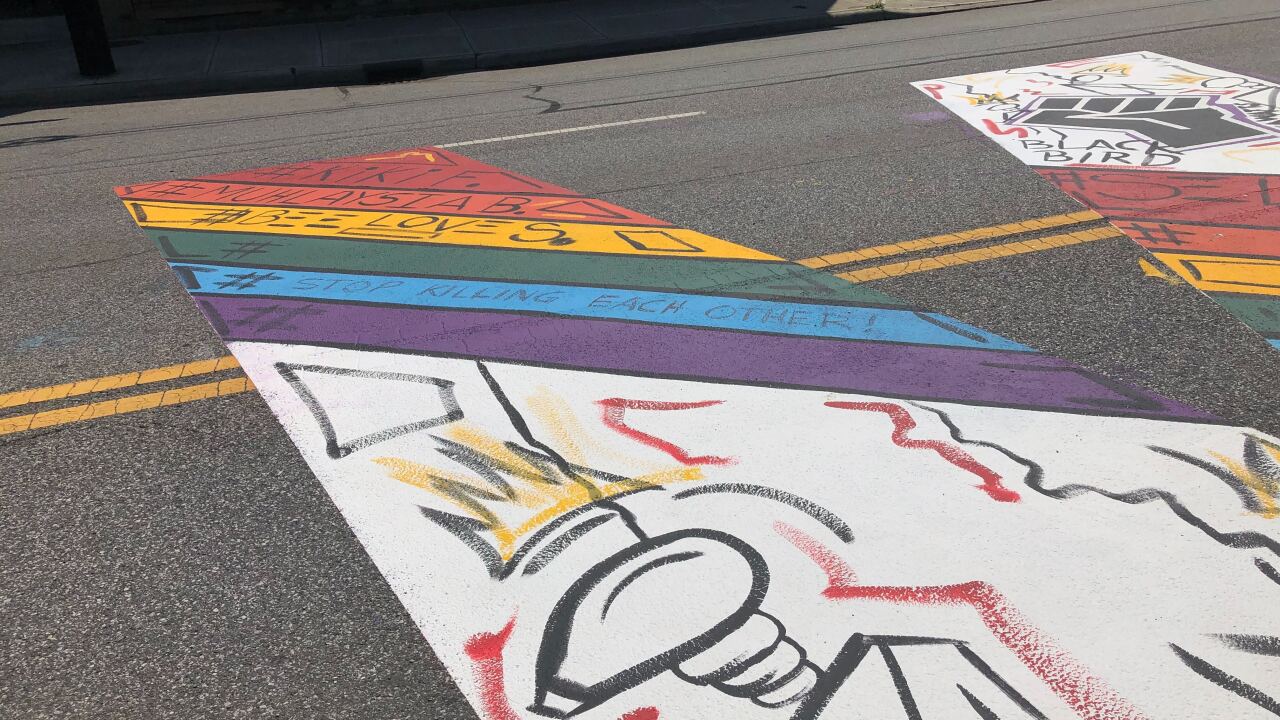 Phrases like “Stop killing each other” and “BLM is Marxist” were written inside some of the creatively-decorated letters of the mural, which spans the street with the words "Black Lives Matter" spelled out on the asphalt.

Ricky Smith, a local artist who led the art project in response to the protests of police violence and racial injustices across the country, remained optimistic after learning of the vandalism, responding to News 5’s inquiry, “It’s cool. It’s expected. I just go down and repaint it.”

On Twitter, Smith said he was grateful for the good weather Monday, so he could fix up some up the letters, adding that he wasn't going to let one person ruin the work and energy put into this mural.

No no nope. I don’t want that to be the narrative. Thousands of people have left their comfort zones to go check out the amazing artwork.

One person felt left out and wasn’t loved enough as a child.

I’m not going to let the one mess up the energy of the thousands. https://t.co/V1GtvFzGR8

The letters, each with a different design, were created by over a dozen local artists who used their own ideas and creative expression to fill the letters.

”It’s bringing back a sense of community, inspiration, hope, freedom, justice and liberty for all,” said local artist Antwoine Washington, who designed the letter "L". “This is what it’s supposed to look like but not all the time it looks like that, but with projects like this we’re able to get closer to that dream.”

Since the mural went up, residents from all over the area have shown up to document the street mural.

Councilman Blaine Griffin expressed outrage at the vandalism. According to the councilman, the street where the mural is at will be closed until July 6 so the mural can be restored and vandal can be exposed.

I am somewhat shocked that a man, apparently possessing some pent-up anger, would boldly step out in broad daylight to deface the newly painted "Black Lives Matter" mural on East 93rd Street. The mural is a community effort, calling for justice and raising the issue of institutional racism.

Nearby residents have taken pictures of a middle aged African-American male defacing the mural by writing over it with messages not consistent with the unifying message the mural represents.

I am extremely disappointed and outraged that someone is so selfish to push his own agenda -- one that is demeaning to the greater community. This man has no right to disregard the artistic expression created by hundreds of artists and community volunteers.

There is also a false narrative put out, saying there were nearby police sleeping while the mural was being vandalized. I have not seen any evidence to prove that nor have the residents. There has been a very limited police presence. Police have been socializing with residents, playing with the children and coming to enjoy the mural themselves. It is so unfortunate that other people who clearly have different agendas would try to tarnish this project.

We will keep the street closed until the morning of Monday, July 6th. We will restore the mural to reflect its original intent and expose anyone who wants to damage it.We will also continue to embrace the visitors that have come to visit the mural. People have come from as far as New York and Washington, D.C., to see the painted street mural. Many groups have bussed in children and various groups including churches, sororities and fraternities. We will continue to have activities to shine a positive light on East 93rd. On Sunday, July 5th, we will host the Line Dance King, Robert Johnson, Jr. at 5:00 pm. We will encourage masks be worn and be safe and physically distant."

Additionally, Griffin issued the following message specifically to the person who vandalized the mural:

You do not have the right to make your opinion more important than the rest of us. We will not allow your selfishness and disrespect for this community to be a distraction from this unifying message. It is not about you. It is about the collective community. The “Gravity of this Moment” has caused many of us to use this as a time for introspection and self-reflection about how we can be part of the solution and demand change. This Black Lives Matter mural means a lot to this community and you need to respect that.