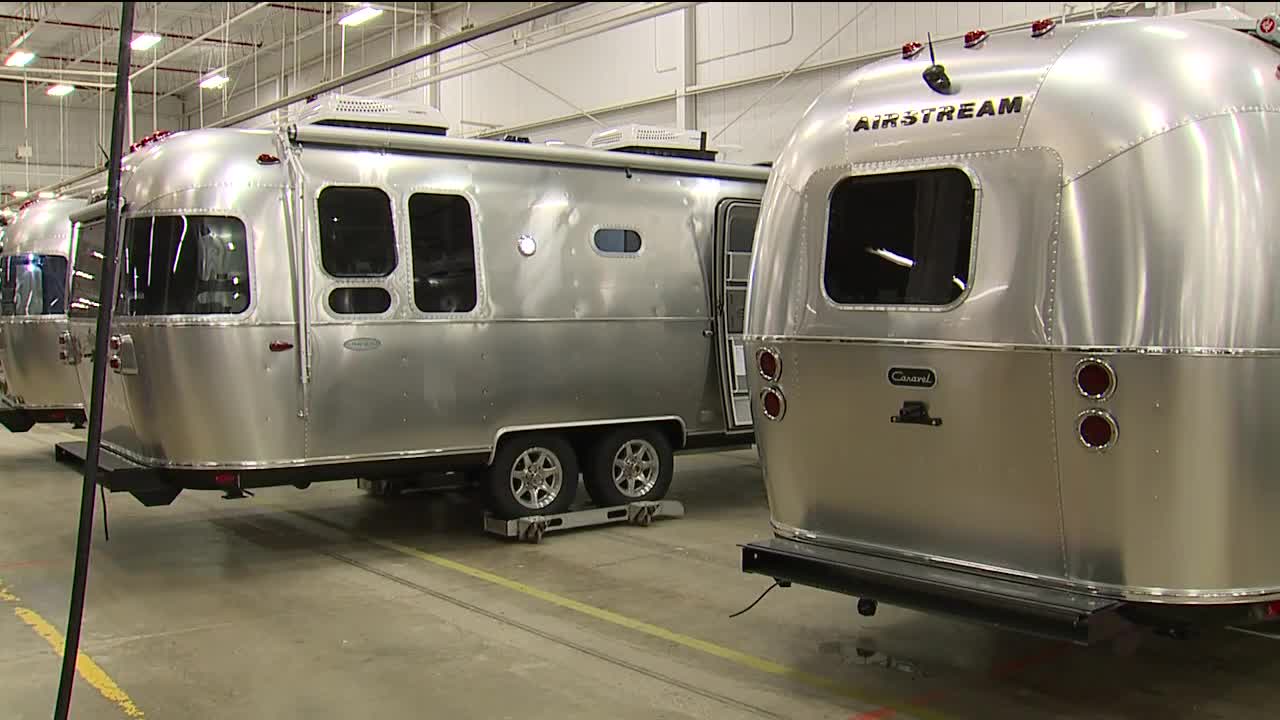 As part of the News 5 Cleveland Buckeye Built series, reporter Meg Shaw went behind the scenes of a business which has made an impact in Southwestern Ohio: Airstream. 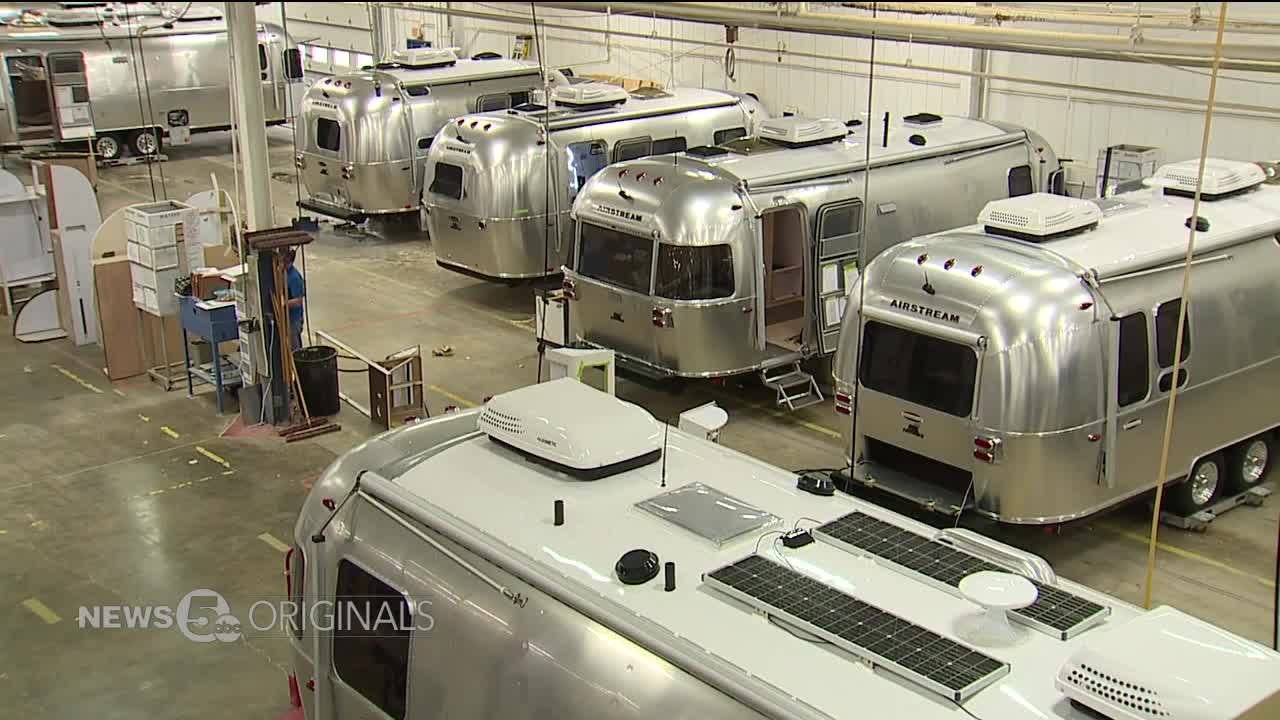 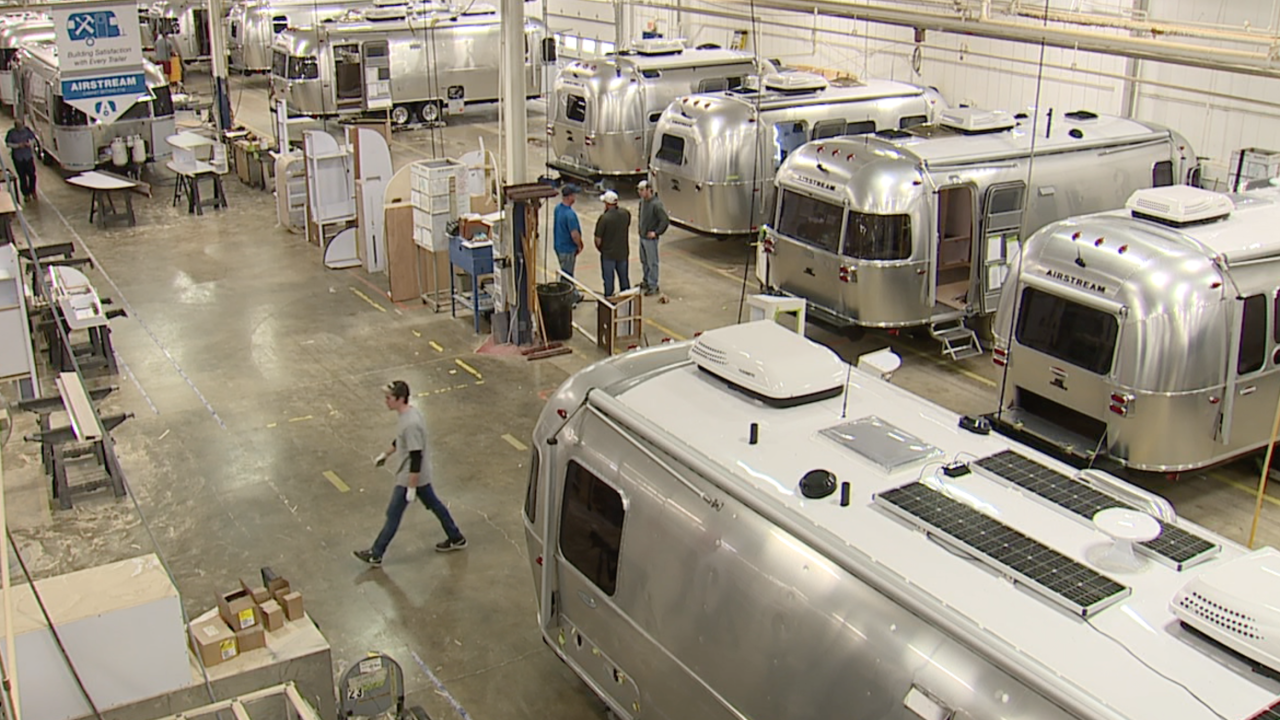 JACKSON CENTER, Ohio — From Cleveland to Columbus and Toledo to Cincinnati, Ohio is packed with companies who call the Buckeye State home.

As part of the News 5 Cleveland Buckeye Built series, reporter Meg Shaw went behind the scenes of a business which has made an impact in Southwestern Ohio: Airstream.

Airstream Inc. was first founded in 1929 by Wally Byam. Byam built his first trailer comprised of a tent contraption on top of a Model T chassis. After some time he replaced that tent with a tear-shaped shelter and born was the idea of Airstream.

In the 1930s Byam opened the first Airstream manufacturing plant in California. The idea boomed at first then became a bust when the Great Depression and World War II rocked America. But today, Airstream is the only travel trailer company to have survived both events.

In 1952 Byam set out to find additional space for the company; he spent a summer looking for space in Indiana, Illinois, and Ohio. Finally, he found a factory for sale in Jackson Center, Ohio.

During this period and beyond, Byam traveled the country pulling an Airstream behind him. He created a movement, a culture.

After more than 40 years, the company remains in Jackson Center where all of the travel trailers are manufactured. The small, two-stoplight village is filled with trucks coming and going from the plant.

About 1,000 employees are employed at Airstream in Shelby County.

The company's CEO, Bob Wheeler, said those 1,000 employees are the hardest working people you'll find in the state. "The term Midwestern work ethic may be cliche and overused, but it's absolutely that," Wheeler said.

All of the men and women employed, with the exception of about a dozen, work first shift putting together iconic Airstream trailers.

During the workday, the sound of rivet guns fill the air as new trailers are constructed and shipped out for sale. It takes about an average of 300 hours and 5,000 rivets to build one of the aluminum travel trailers. "It may not be the fastest method, but it's the right method," Wheeler said.

Wheeler said his company has seen its fair share of ups and downs, but credits the Ohio workers for keeping the company parked in the Buckeye State.

Wheeler said what his employees are building aren't just travel companions. "What we’re building here is meant to last generations. It’s something you hand on to your kids, an heirloom.”

Over the last five years, the company has recorded major growth. Sales are up 218% with a new crowd of buyers: the millennial generation.

"There seems to be this awakening about these authentic American brands and handmade. There's a real respect for the craft of what we do," Wheeler said. "They’re much more interested in having adventures and meeting new people, rather than collecting a house in the suburbs and a bunch of cars.”

The CEO said the younger generation, unlike Baby Boomers, aren't waiting until retirement to buy a travel trailer. They want the adventure to start much sooner.

To keep up with the demands from that group of buyers, Airstream has upgraded many areas inside the trailer including its ability to stay connected online.

“It enables people to stay out longer. It enables them to take more trips more frequently because they can stay connected when they want to. They have the option," Wheeler said.

But, he said with a new crowd of customers, their company feels a new sense of responsibility.

“If we can some small way heal this divide that seems to be separating this country by opening people’s mind by new ways of thinking, new people, new conversations, then I feel like we’ll have at least done our little piece and that’s fun to think about.”

The company is currently in the middle of building a brand new 750,000-square-foot facility just a half mile from its current location in Jackson Center. The $40 million investment will not only give employees more space to build trailers, but will also provide more jobs in Shelby County.

Wheeler said they plan to hire about 200 people when the building is complete.

He told News 5 Cleveland, the company could've packed up and moved west—back to its roots. But after weighing the pros and cons, he believes it wouldn't work anywhere else.

“We’re doubling down on Jackson Center, Ohio. We think Ohio is a great place to do business. We love the people who come to work at Airstream and we can’t imagine doing it anywhere else," he said.