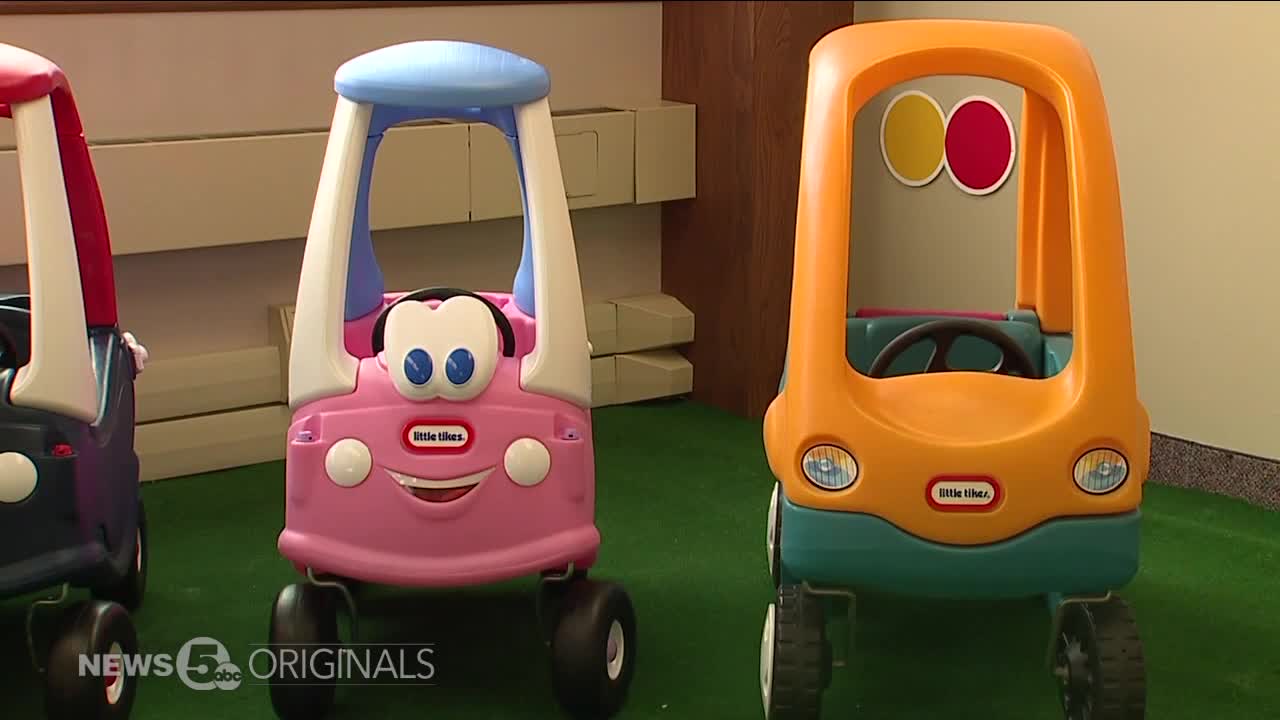 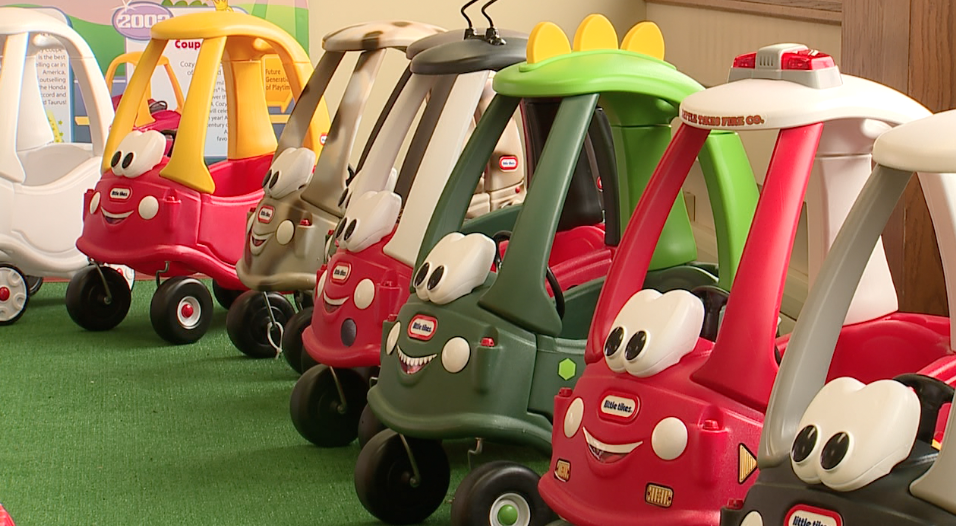 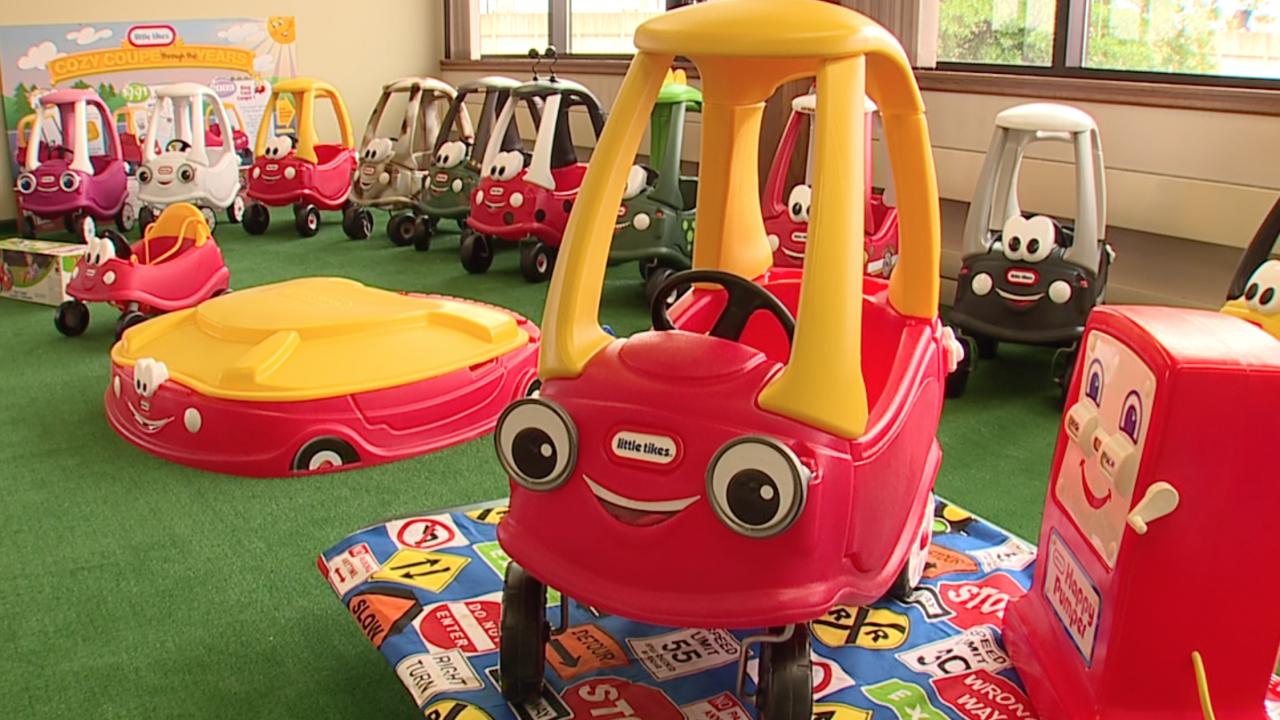 HUDSON, Ohio — From Cleveland to Columbus and Toledo to Cincinnati, Ohio is packed with companies who call the Buckeye State home.

As part of the News 5 Cleveland Buckeye Built series, reporter Meg Shaw went behind the scenes of a business which has helped to create endless hours of playtime: Little Tikes.

Little Tikes was founded in 1969 in Hudson, Ohio. Tom Murdough, the company's founder, launched the toy company debuting brightly colored and durable plastic toys. At the time, they ranged from ride-on horses to toy boxes. In just a matter of a few years, Little Tikes toys were some of the hottest on the market.

Throughout the mid to late 70s, Little Tikes manufactured some of the most iconic toys including: the Turtle Sandbox, Cozy Coupe and Big Dumpster Truck.

In 1984 Rubbermaid purchased Little Tikes. This was the beginning of the company's expansion into toy manufacturing at their Hudson campus. At this time, they became the first toy company to mold their Toll Free Number into all their toys, which is still used today.

By 1991, the Cozy Coupe was named the best selling car in the United States. By 2003, more than 10 million cars were sold nationwide. The toy car today now comes in a variety of colors and themes like the Cozy Fire Truck, the Patrol Cozy Coupe and Princess Cozy Coupe.

In 2006 MGA Entertainment acquired Little Tikes from Rubbermaid. That year the some 500 employees at Little Tikes were generating about $250 million in revenue.

Today the company still sells many of their iconic toys but has also expanded their collection to include products for infants, toddlers and young children.

The campus now houses four buildings, which all have a part in the molding process.

Roseann Kubisty, the Vice President of new business development, credits the success of Little Tikes to its Ohio roots.

“It's a great state to manufacture in. We are continuing to look for other opportunities to make products for other companies besides just consumer products and children's products,” she said. “It's a beautiful state.”

Kubisty also said the company’s employees play a major role in their growth over the years.

“We have people that have been working in the factory for 20 to 30 years. It is hard work, but again, that sense of pride in knowing that we're making is going to last,” Kubisty said.

Nearly 500 people are employed by the toy maker.

Little Tikes has seen its fair share of ups and downs over the years, including the closing of Toys “R” Us.

“Initially it was a huge shock,” Kubisty said. “They had space that no other retail could dedicate to children's products.”

Kubisty said Toys “R” Us was an opportunity for parents to go into a store and touch and feel their products, so when it shut down that opportunity was gone.

The closing also provided Little Tikes an opportunity to move into a new direction in terms of retail sales. The company had to work with their other retailers to fill the gap left behind by Toys “R” Us.

Plus, the opportunity to jump into e-commerce came fast and furious forcing them to reevaluate their marketing practices.

“We're updating photography, so you can see our product online and get more of a feel for what we manufacture,” Kubisty said. “So it hasn't been easy, but it's paying off and it's working. We're winning back that business that we lost when Toys R Us went away.”

Little Tikes plans to develop more toys where parents and children can play together.

“It's about parents and kids in discovery and playing, whether it's indoor or outdoor so it's just that legacy of great product,” Kubisty said.

The toy maker is also working towards incorporating more electronics into its products.

RELATED: Buckeye Built: Sherwin-Williams has been mixing up new paints in Cleveland for 153 years