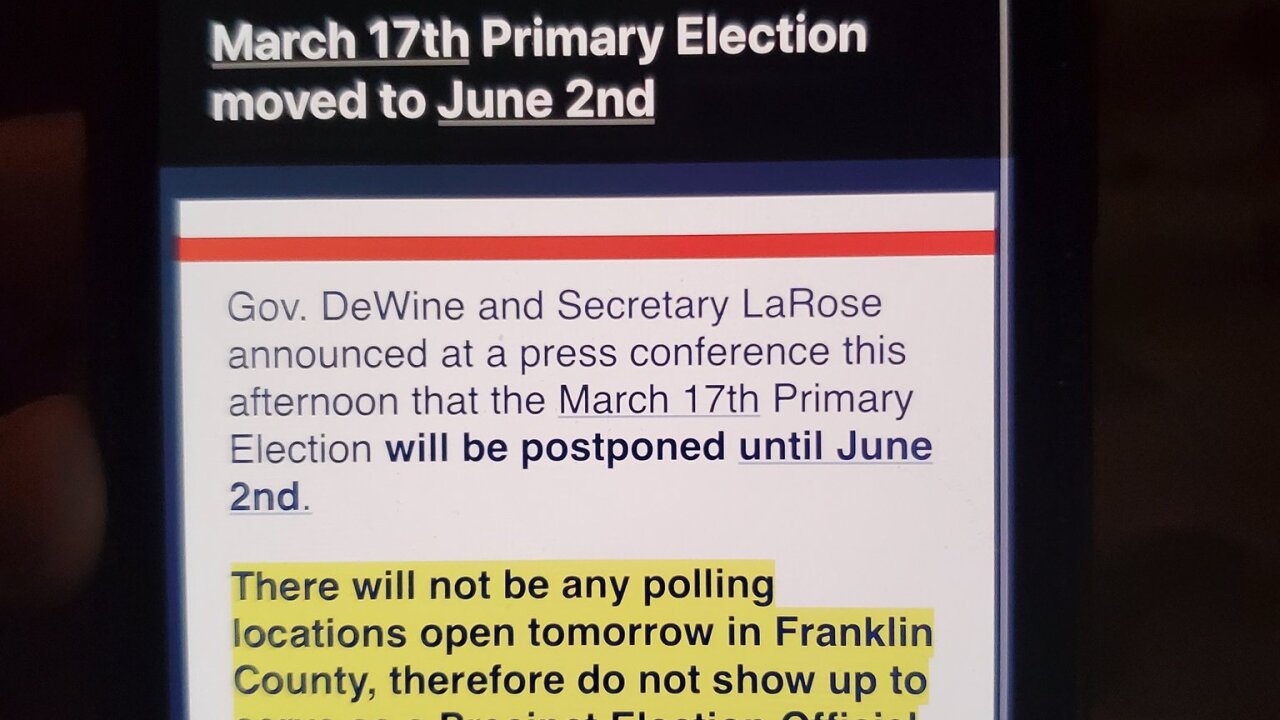 CLEVELAND — Poll workers across the state are wondering what to do next after a judge denied Gov. Mike DeWine's request to move the March 17 primary to June 2.

DeWine wanted to move in-person voting to later in the year in the hopes it would be after the height of the COVID-19 pandemic.

During his Monday afternoon press conference DeWine said he couldn't ask people to do two things at once.

"This is not a time people should choose between their Constitutional rights and their health," DeWine said of his reasoning to postpone the primary the night before in-person votes were cast. "It is, I believe, the right thing to do."

But DeWine could not make a unilateral decision.

A motion was filed by two Franklin County residents in a county court asking the judge to postpone the election.

The judge denied the motion around 7 p.m. Monday.

Judge Richard A. Frye said he was not comfortable making a decision the night before the election.

But his decision sent poll workers confusing messages. Workers from Cleveland, Columbus and Cincinnati reached out to News 5.

Two workers, one for Cleveland and one from Cincinnati, said they got automated calls telling them not to come to their polling locations to set up.

Rebecca Maurer said her call came around 4:45 p.m. She was expected to report at the Boys and Girls Club in Cleveland around 6 p.m. to set up.

Monday night would have been the first time she was at her polling site. It was moved to the Boys and Girls Club because the original location was at a senior center.

She worried the set up would take too long in the morning and voting would get off to a slow start.

"I don't think that's fair to poll workers to wait until today to make a decision," said Greg Jesionek.

He got several calls Monday night giving him different instructions.

The issues weren't just near Cleveland.

"We got a follow up call telling us to report at 5:30 a.m.," said one poll worker in Cincinnati. "No explanation for how we're supposed to do two hours of work in an hour. Infuriating."

The worker told News 5 he also got an in-person call that said they may have to start voting without being completely ready.

A woman in Columbus was sent an email around 7:30 p.m. that said the election was off.

That was about half an hour after the judge ruled to keep the election going.

About two hours later, she got a text saying the election was on and that she was expected to reporte for her Tuesday shift at 5:30 a.m. Her shift will end at 8 Tuesday night.

Because of the issues with COVID-19, there is worry over a shortage of poll workers to begin with.

All but one person News 5 talked to said they would report to their locations Tuesday. The only one said they decided to work Tuesday after they were told not to report.