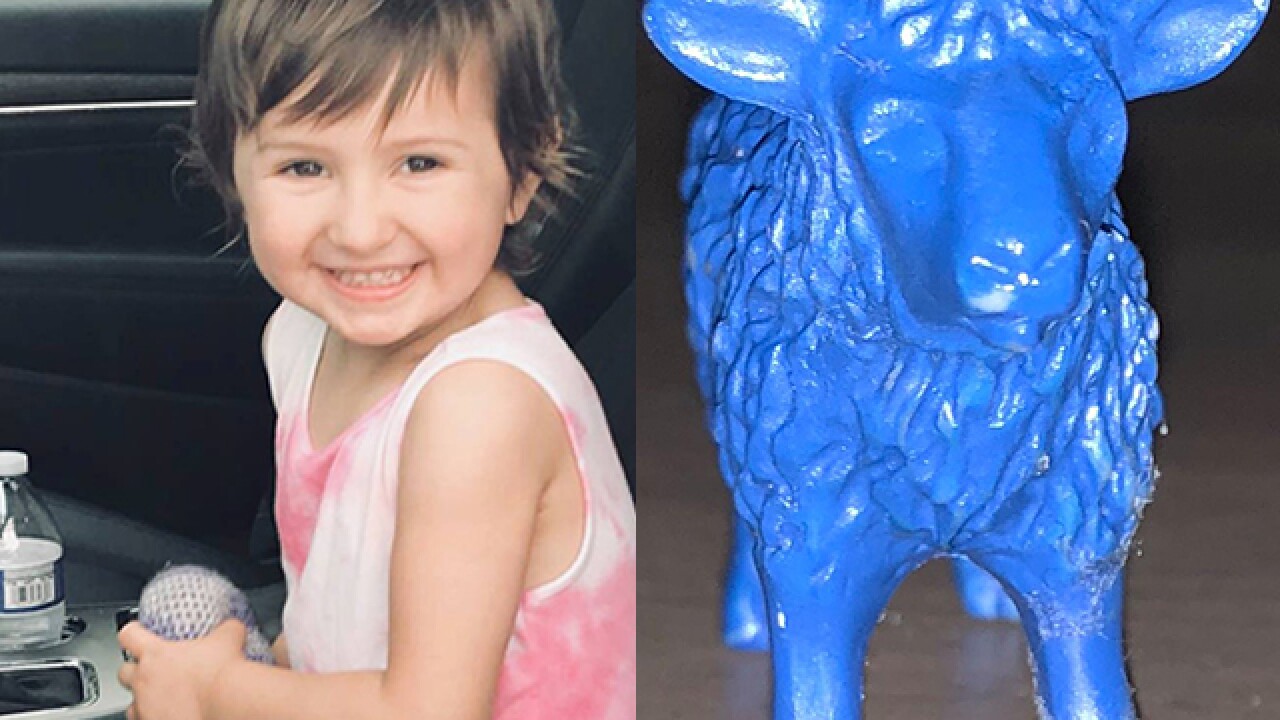 Copyright 2018 Scripps Media, Inc. All rights reserved. This material may not be published, broadcast, rewritten, or redistributed.
<p>The family of 2-year-old Viv (left) is looking for her anonymous bone marrow donor who also sent a blue sheep figurine (right). He may be the key to Viv's next cancer treatment. Photos from G.I. Zaratsian's Facebook page.</p>

A Cleveland family is hoping social media will help them locate the donor who provided bone marrow to treat their 2-year-old daughter’s cancer last October. Doctors say this anonymous donor could be the key to treating their daughter’s cancer relapse.

G.I. and Annie Zaratsian’s daughter Viv is living a normal 2-year-old’s life – at home, enjoying time with her sisters. She was diagnosed with Acute Megakaryoblastic Leukemia on July 20, 2017, at just 18 months old, according to a Facebook post from her mother. Over the next five months, Viv was hospitalized, faced multiple challenging complications, and received a bone marrow transplant from an anonymous donor. One year after her diagnosis, she was in remission.

Then, during a recent routine biopsy, Viv’s family learned that she is beginning to relapse, and her cancer is returning, her father said in a Facebook post Tuesday. The biopsy revealed that 0.2 percent of her cancer cells are back.

The family is working with doctors at the Rainbow Babies and Children’s Hospital in Cleveland to develop a plan to get Viv back into remission and fully healthy again, and to capitalize on the fact that her cancer numbers are still low, her father said.

One of the potential treatments Viv’s doctors would like to administer is a process called Donor Lymphocyte Infusion, or DLI. It requires some of the blood to be extracted from her bone marrow donor and then infused into Viv, her father explained.

Unfortunately, the donor registry team is unable to make contact with her bone marrow donor and the family is not legally allowed to receive information about who the donor is due to privacy and confidentiality regulations.

The family posted all this on Facebook with the hope that it would be shared, and that the anonymous donor would come forward to donate his blood and get Viv the treatment she needs.

The family knows the donor is a young male, likely 20 to 30 years old, and he does not live in the United States. There’s another unique connection that might help them track him down: when he donated his bone marrow, he sent along a small blue sheep figurine for good luck.