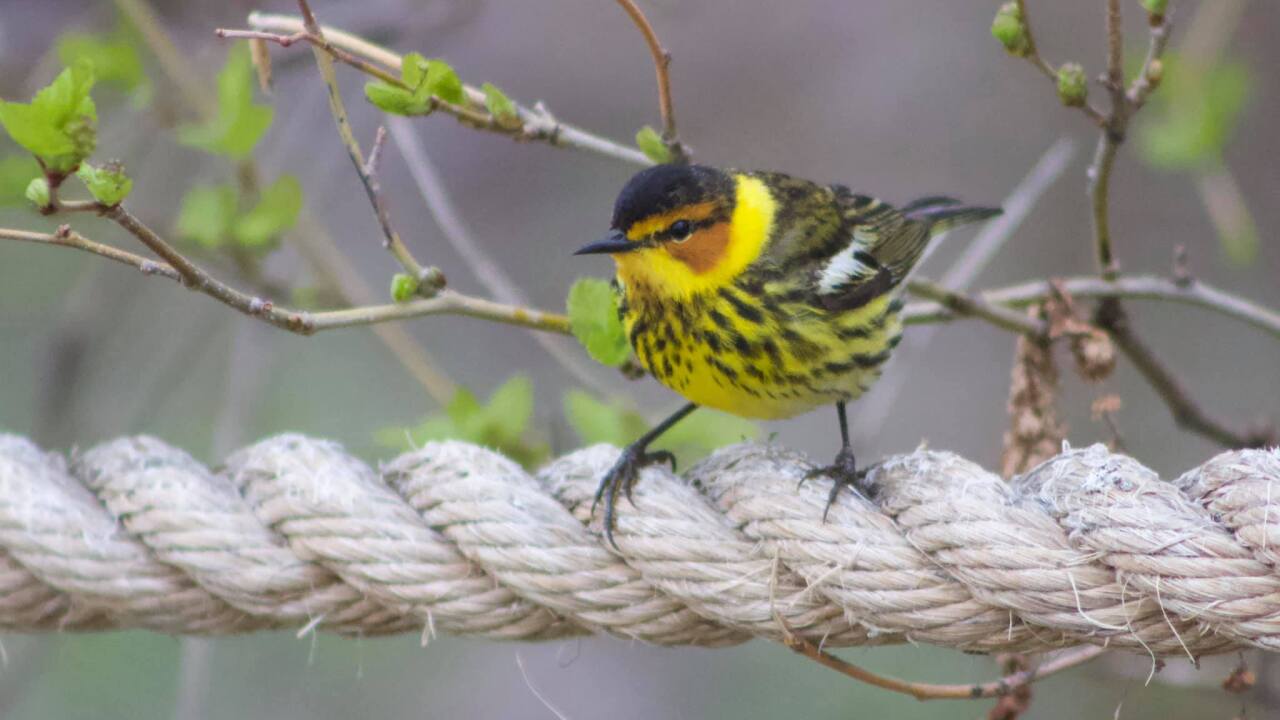 Jen Brumfield
Cape May Warbler spotted at Wendy Park on May 24, 2020

CLEVELAND — An unassuming green oasis surrounded by industry, a port and bustling nightlife, the 22-acre patch of Wendy Park, also referred to as Whiskey Island, is a haven for wildlife, and as Cleveland Metroparks Naturalist Jen Brumfield puts it, “sticks out like a green thumb for migrants.”

Year after year, Wendy Park is a 5-star Airbnb listing for millions of migratory birds, monarch butterflies, dragonflies and bats. But this year has been different, says Brumfield, who patiently watched and recorded, to her amazement, record-setting numbers of warblers, songbirds, vireos, thrushes, tanagers, orioles, sparrows and flycatchers during the last week of May.

For those who are not familiar with warblers, they are a family of colorful birds. In Ohio, you can regularly see 36 species of warbler annually, according to John Pogacnik, a biologist at Lake Metroparks.

"The Lake Erie region is one of the best places in the world for observing warblers," wrote Pogacnik in a blog detailing the presence of warblers in the region.

Nature and bird-watching enthusiasts were unsure what to expect when May started off with unwelcoming cold.

“When the weather turned and warm south winds started pouring up through the Mississippi Valley and Great Lakes, what soon followed was nothing short of mind-bendingly spectacular,” she said.

In a single day, Brumfield recorded over 400 individual warblers of 25 species—a red-letter record for any location in the Eastern U.S.

One moment Brumfield won’t ever forget is when she found an immature Scissor-tailed Flycatcher, a bird typically found in Texas and Oklahoma that foraged itself in the canopy of the cottonwoods at Wendy Park.

“Other birders and I were in shock, awe and delight, who carefully and safely social distanced, of course, to see a bird that I have scoured the site of Cuyahoga for 12 years,” she said.

Local birders observed in awe as they enjoyed other sightings, including the Scarlet Tanagers, the typically-difficult-to-see Black-billed Cuckoos mere feet away.

Brumfield looked back at what felt like whirlwind, saying, “The camera shutters didn't stop for almost eight days in a row.”

Several times, the day's total broke 100 species of birds for the site, including a remarkable morning when 88 species were seen in 120 minutes.

“Relentless south winds brought more and more birds each day, to the jaw-dropped awestruck birding community that did our best to get out safely to document the sheer phenomenon of birds 'dripping' from trees, hopping around on beaches and lawns, and even landing on hundreds of fisherman's boats offshore,” she said.

The presence of a place like Wendy Park is vital, yet sadly rare. Healthy woodlands and fields on the shoreline of Lake Erie are uncommon. That's why the small woodlots full of cottonwoods and black cherry and mulberries make Wendy Park an obvious destination for birds and animals seeking critical food supplies and safe harbor.

“It's prime geographical location, on the immediate west bank of the Cuyahoga River, the north side of the Old Cuyahoga Riverbed, and bordered by Lake Erie on its north side, makes it truly an island of exceptional birding opportunities,” Brumfield said. "This year was yet another barrage of spectacular examples of how crucial even a small woodlot or small field is to the livelihoods of these migrating animals.”

RELATED: Stay tuned: The monarchs could soon invade the shores of Lake Erie ahead of astounding migration to Mexico