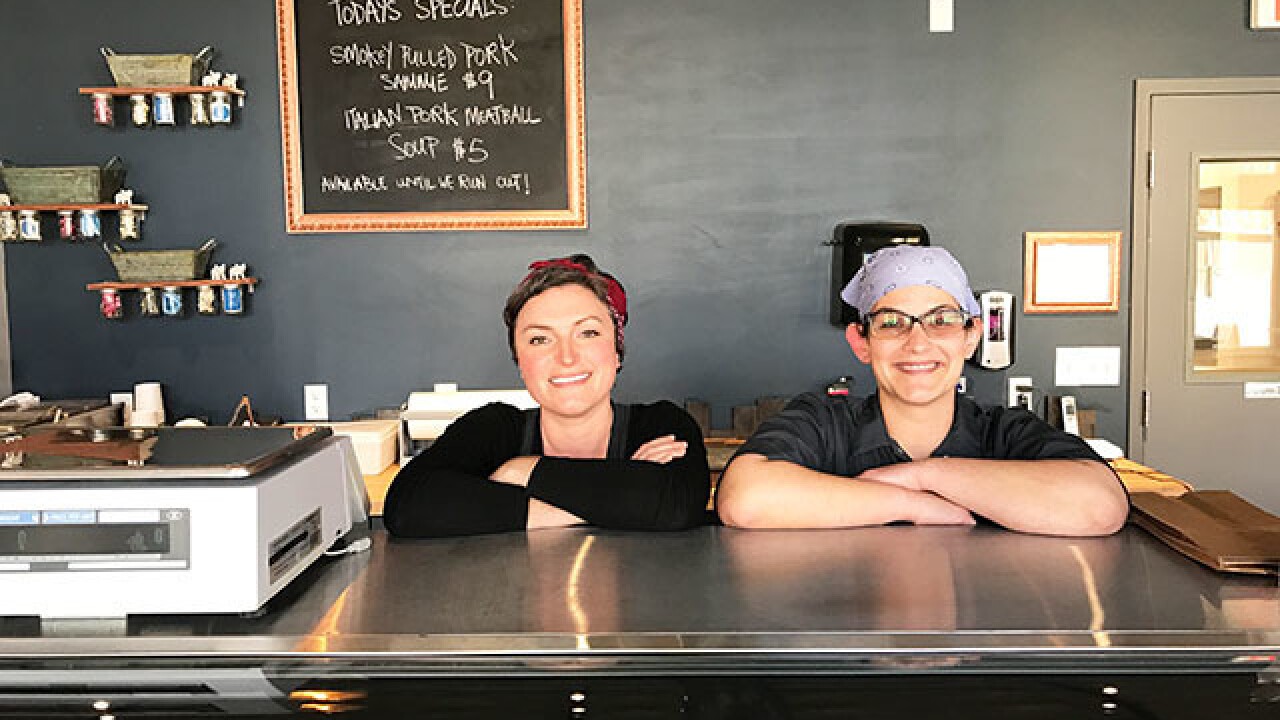 Copyright 2018 Scripps Media, Inc. All rights reserved. This material may not be published, broadcast, rewritten, or redistributed.
Kaylyn Hlavaty
<p>From left to right: Penny Barend and Melissa Khoury at their shop on Fleet Avenue. </p>

CLEVELAND — ‘The Lady Butchers’ of Saucisson in Slavic Village represented Cleveland on the Food Network show “Beat Bobby Flay”—and they did just that.

“Beat Bobby Flay” pits two chefs against each other to create using an item of award-winning celebrity chef Bobby Flay’s choice for the hosts, who then judge the first round. The winner of the first round moves on to take on Flay himself. In round two, the selected chef chooses a signature dish that Flay must create and compete against.

Cleveland butchers and chefs Penny Barend and Melissa Khoury, better known as “The Lady Butchers” at Saucisson, went head to head on the show, first competing against each other and then the winner took on Flay.

The hosts of Sunday’s episode were actress Courtney Rada and Michael Symon, another award-winning celebrity chef, who just-so-happens to be from Cleveland as well.

Although it was filmed last fall, the episode featuring Barend and Khoury aired Sunday and the Cleveland butchers made the city proud.

In the first round, Flay gave Barend and Khoury bison as the main ingredient for their head-to-head dishes. Symon and Rada gave the victory to Barend, who moved on to battle Flay with her signature dish—pork sandwich.

Barend used grilled pork, chorizo and slaw to create her signature pork sandwich which she presented to the three judges—Lourdes Castro, culinary director of NYU Food Lab; Matt Abdoo, chef and partner of Pig Beach; and Leah Wolfe, butcher and class director at The Meat Hook.

The judges unanimously voted for Barend’s pork sandwich as the winner over Flay, bringing the championship home to Cleveland.

Barend and Khoury opened Saucisson in 2017 in Cleveland’s Slavic Village found success in a neighborhood considered the epicenter of the foreclosure crisis at the time.

Saucisson is located at 5324 Fleet Avenue and is open on Thursday, Friday, and Saturday from 11 a.m. to 7 p.m.

You can watch the entire episode of “Beat Bobby Flay” by logging in with a TV provider here.

WATCH PARTY!! The episode starts at 10:30pm tomorrow, we will be there at 10pm with pizza & be grabbing beers & settling in to see our Episode of Beat Bobby Flay, “The Lady Butchers”!!! @bobbyflay @foodnetwork @chefsymon @courtrada #iheartswine #ladybutchers #beatbobbyflay pic.twitter.com/etIOWWgd52

RELATED: 'The Lady Butchers' of Cleveland to be featured on Travel Channel's 'Zimmern List'