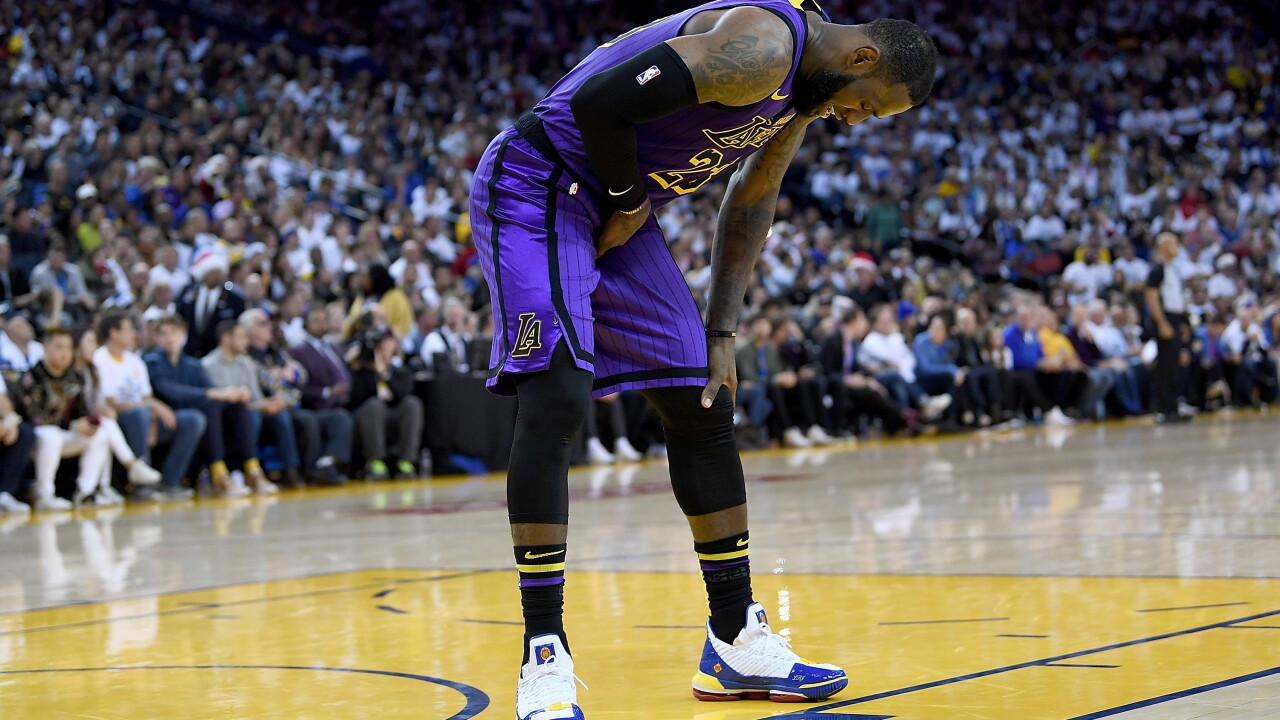 Thearon W. Henderson/Getty Images
OAKLAND, CA - DECEMBER 25: LeBron James #23 of the Los Angeles Lakers leans over in pain after he was hurt against the Golden State Warriors during the second half of their NBA Basketball game at ORACLE Arena on December 25, 2018 in Oakland, California. NOTE TO USER: User expressly acknowledges and agrees that, by downloading and or using this photograph, User is consenting to the terms and conditions of the Getty Images License Agreement. (Photo by Thearon W. Henderson/Getty Images)

LeBron James left Los Angeles' 127-101 win against Golden State midway through the third quarter with a strained left groin, and the Lakers expected to know more about his status following an MRI exam Wednesday.

The Lakers star grabbed at his left groin after slipping under the Warriors basket at the 7:51 mark of the third trying for a loose ball. He said he has had the injury before but "not in a long time."

James grabbed at his left groin area with 7:51 left in the third after slipping under the Warriors' basket while trying for a loose ball. He tried to stretch it out, awkwardly walked toward the Lakers bench trying to loosen up before leaving on his own though gingerly out the tunnel for the locker room.

Members of the training staff came out and James tried to stretch it out, awkwardly walked toward the Lakers bench trying to loosen up before leaving on his own though gingerly out the tunnel for the locker room.

"I wasn't able to go back into the game, obviously. I'll get an MRI tomorrow and see what's up," James said. "With me with injuries, I'm never too concerned about them. I was able to walk off on my own power. I felt a pop, see if I could stretch it a few times, see if it would relieve but it didn't. ... I did a couple exercises to see if I could continue to go but I didn't feel like it would benefit my team or me. So I came back and got a jump start on the rehab."

James, playing his second straight Christmas game against the Warriors at Oracle Arena after losing last year's matchup with Cleveland, had 17 points, 13 rebounds and five assists before exiting.

Coach Luke Walton said he would prepare for the Lakers to be without James on Thursday night at Sacramento.

James has played in 156 straight games overall and 116 in the regular season.