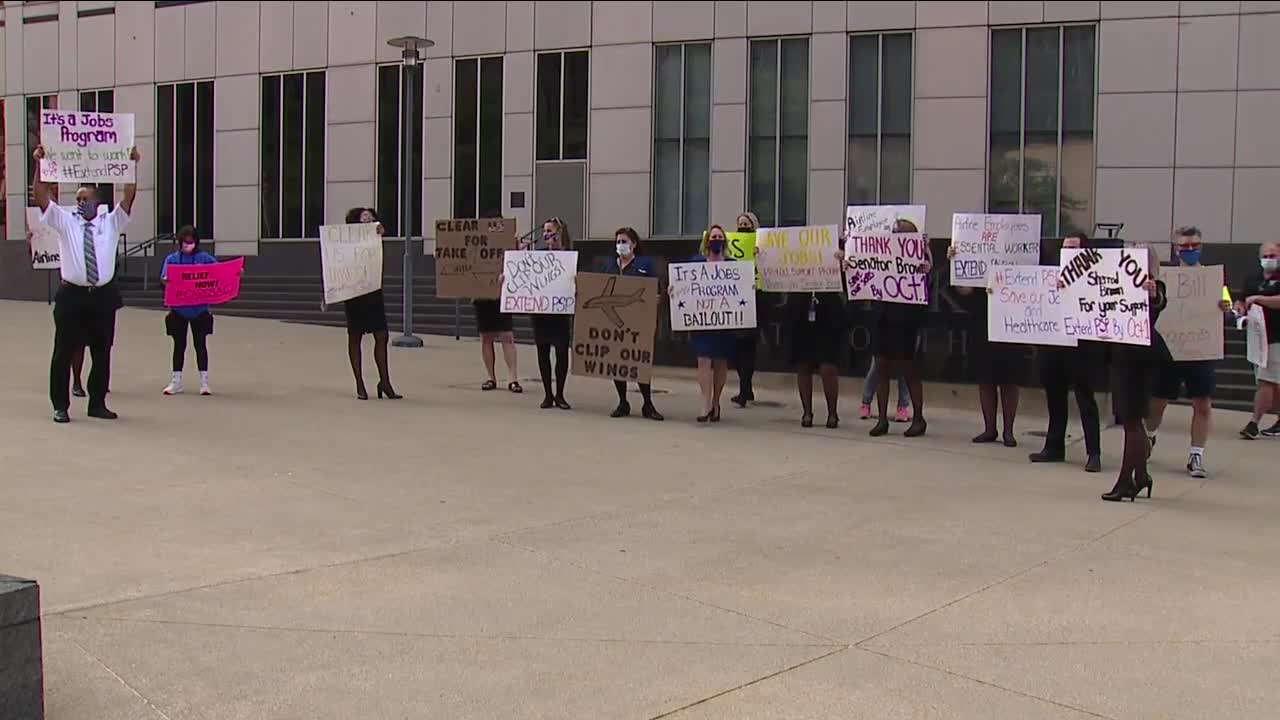 Airline employees converged on the federal courthouse in downtown Cleveland Tuesday to clamor for an extension to a federal relief package that proponents believe is the one thing keeping them away the unemployment line. 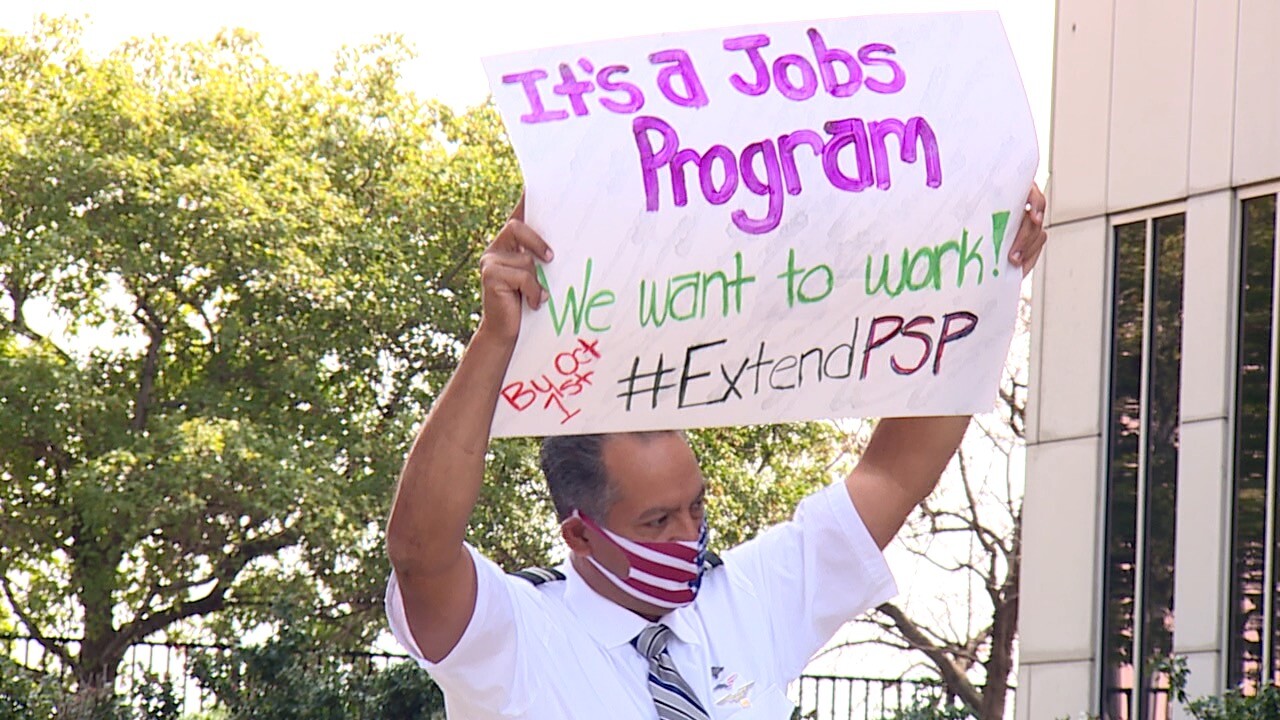 CLEVELAND — Airline employees converged on the federal courthouse in downtown Cleveland Tuesday to clamor for an extension to a federal relief package that proponents believe is the one thing keeping them away the unemployment line. Part of the CARES Act passed by lawmakers in late March, the Payroll Support Program, which was designed to keep airline employees on the payroll through the pandemic, is set to expire on September 30.

The airline employees and union members that attended Tuesday’s rally fear that if the relief isn’t extended by Congress and the Senate, the economic implications could be severe. “We need a clean extension of the Payroll Support Program otherwise there will be tens of thousands of people unemployed,” said Melissa Chipchak, a United Airlines flight attendant and member of the Association of Flight Attendants-CWA. “Right now all the airline employees are trying to get themselves together. If Congress does not act now, we will be furloughed on October 1 and it will affect tens of thousands of people. It has an effect on everyone, not just the airline workers. It’s the whole economy as one but the airline workers will feel it first.”

Chipchak said if the PSP is not extended, hundreds of thousands of airline employees will be vying for positions, resulting in furloughs and possible layoffs. Similar to how the Payroll Protection Program provided forgivable grants for small businesses, the PSP provided $25 billion to airlines in order to keep their employees on the payroll and eligible for healthcare benefits. According to the U.S. Treasury, Southwest, United and American Airlines received a combined $14 billion.

“We connect people to things that matter. It’s an important infrastructure to our industry,” said Chad Kleibscheidel, the first vice president for TWU Local 556, which services Southwest Airlines. “The collapse of the airline industry would be devastating to the economy.”

In the early days of the COVID-19 pandemic, the airline industry began a rapid descent. In a matter of weeks, the number of passengers flying commercially dropped precipitously, bottoming out at just one percent of its March 2019 totals, according to TSA data. By the end of March, air travel had dropped 93%. Although it has been five months since then, air travel hasn’t fully rebounded.

Federal data shows the total number of passengers on any given day is less than half of what it was in 2019. On September 14, the TSA reported a total traveler throughput of 729,000 people compared to 2.4 million on a similar weekday in 2019.

“The Payroll Support Program back in March allowed 2.1 million people to remain stabilized in their jobs for six months,” Chipchak said. “Right now, with a 16-day deadline, those people are going to be feeling the effects of this.”

The mass furloughs and layoffs, Chipchak said, would likely be one massive domino of many to follow. There would be fewer direct flights and more connecting flights. Direct flights to small and medium-sized airports would also likely be eliminated. There would also likely be a massive impact on hotels, tourist destinations and restaurants. Some of that has already happened. According to several Worker Adjustment Retraining Notifications (WARN) filed with Ohio’s Department of Job and Family Services, United Airlines, Express Jet and another major vendor at Hopkins International Airport are already planning on laying off more than 600 workers.

The workers include maintenance staff, mechanics and other support staff.

After years of positive growth, Hopkins has been hit especially hard by COVID-19 and the shutdown orders that followed. Robert Kennedy, the director of airports, told the Cleveland City Council in early August that Hopkins was anticipating 6 million fewer passengers in 2020 compared to 2019. That would account for a 59% drop. International travel has seen an even sharper decline of 73% compared to 2019. The recovery, Kennedy said, would be slow and arduous, likely lasting until 2024.

You can see total traveler data at Hopkins below:

Passenger data for CLE Airport, June and July by Wews WebStaff on Scribd

Oho’s airline and aerospace industry is extremely robust especially in Northeast Ohio, which amounts to an estimated $3.2 billion. Ohio is the top global supplier state for both Airbus ($6.1 billion) and Boeing ($11.4 billion), according to Team NEO.

If the major airlines have to make cuts in the purchase of new aircraft or research and development, the trickle down impact would be felt all over the state, officials said.

The airline staff that rallied outside the federal courthouse on Tuesday also wanted to show their support for Sen. Sherrod Brown (D-OH) who has supported an extension of the PSP. In a statement, Sen. Brown said it is vital for lawmakers to continue negotiating.

“I fully support these workers speaking out for what’s right, and I agree that we should be negotiating the next relief package in Washington right now. Instead, President Trump, Mitch McConnell and Senate Republicans continue to play politics with critical relief and introduced an inadequate and cruel plan to give legal immunity to corporations working to roll back worker protections, while cutting in half the unemployment benefits that Ohio families desperately need. Washington Republicans’ unwillingness and inability to negotiate in good faith – combined with the President’s failure to get this pandemic under control – has left hundreds of thousands of Ohioans sitting on the sidelines of our economy without the resources and assistance they require during these unprecedented times.”