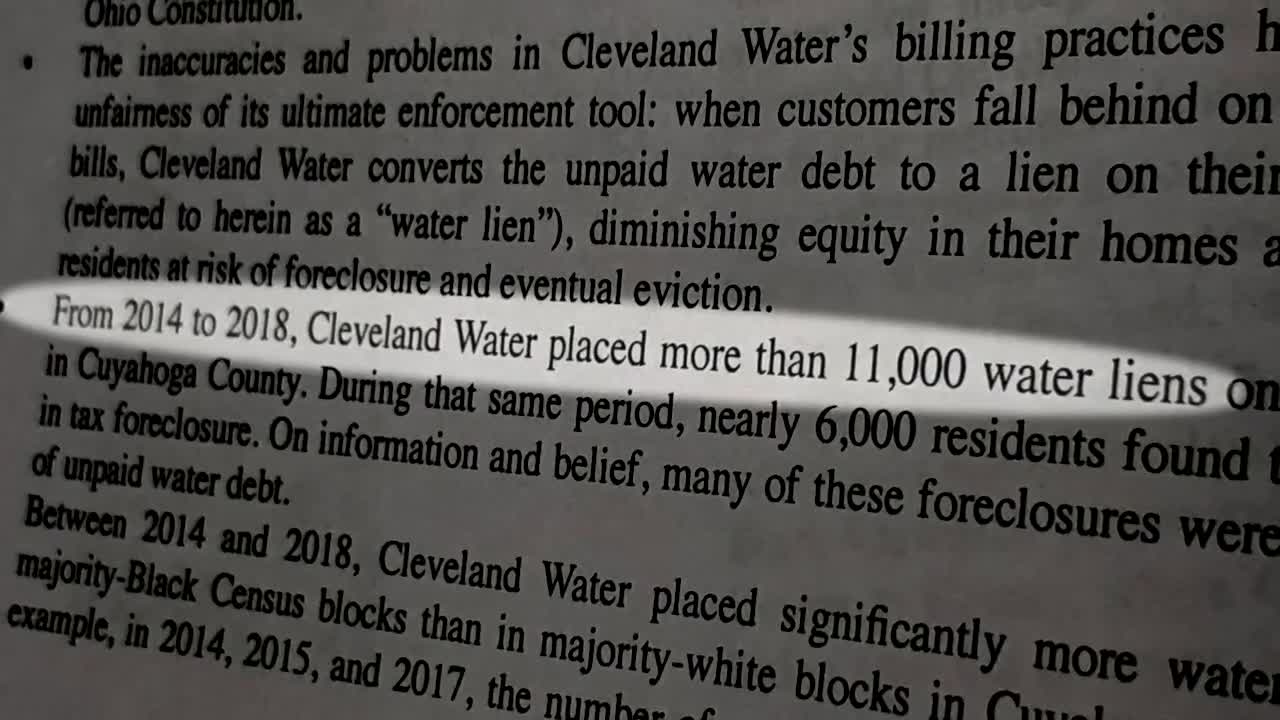 Councilman on Cleveland Water lawsuit: 'Our negligence has harmed people'

“For years, Black Clevelanders have been plagued by excessively high water bills, service shutoffs, and the risk of losing their homes due to water liens,” said Coty Montag, lead counsel for the lawsuit. “Cleveland Water must change its practices to ensure that all residents have access to clean, affordable water, a basic human right.”

The lawsuit claims the City of Cleveland through its water department has violated the federal Fair Housing Act, due process under the 14th Amendment, and the Ohio Civil Rights Act.

Odessa Parks, 81, is one of five plaintiffs named in the lawsuit. Parks received a water bill for nearly three thousand dollars for water she insisted she never used.

"All of a sudden I just started getting great big bills and they threatened to turn the water off," Parks said.

Parks called three different plumbers to look for a leak in her pipes that could account for a spike in water usage. She says the plumbers never found one.

Parks said she tried to explain her case to Cleveland Water but couldn't convince the utility that she didn't use the water.

"You talk to people there and they just say, 'there's nothing I can do, you just have to pay it,'" she said.

Instead, Cleveland Water converted her delinquent water bill into a tax lien on her home creating a high risk for foreclosure.

According to the NAACP LDF, Cleveland Water has placed significantly more water liens in predominately black neighborhoods than in majority-white neighborhoods in Cuyahoga County, between 2014-2018.

Earlier this year, the NAACP LDF authored a 104 page report called Water/Color which served as a precursor to the lawsuit filed Wednesday.

"As our Complaint alleges, we believe that Cleveland Water’s discriminatory and unfair practices violate the Fair Housing Act, the U.S. and Ohio Constitutions, and the Ohio Civil Rights Act," said Montag who authored Water/Color.

"These practices leave Black residents of Cleveland without the basic necessity of water and can also lead to the loss of their homes," she said. "The city and water department have not been responsive to the findings in our Water/Color report and we believe litigation is necessary to remedy these practices."

The Water/Color report credited the 5 On Your Side Investigation "Drowning in Dysfunction" for shining a light on systemic issues with Cleveland Water dating back to 2008.

Other plaintiffs include Albert Pickett of East Cleveland, who lived without running water for six years, and Jarome Montgomery of Warrensville Heights who believes he had overly inflated bills and a tax lien placed on his home because of them.

"The ultimate goal of the lawsuit is to end Cleveland Water’s discriminatory and unfair practices," said Montag.

"We seek to end the department’s water lien policy to ensure that residents will not lose their homes over the inability to pay a water bill."