Neighbor: Mom screamed for help amid fire that killed 5 kids 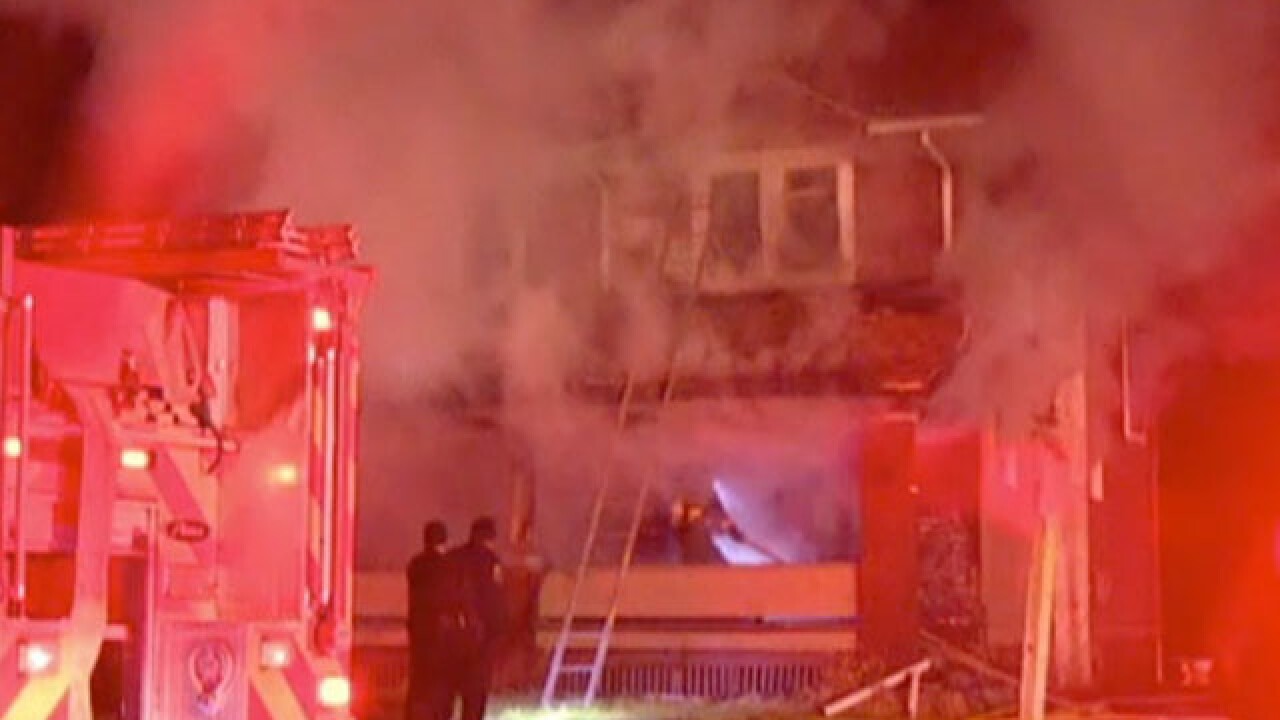 An anguished mother, naked and bleeding, banged on the door of the house across the street and screamed for help in a fruitless plea to save her five children as a late-night fire swallowed their Ohio home, a neighbor said Monday.

Fire officials in Youngstown said the woman jumped from a second-story window and was the only survivor of the Sunday blaze that killed the children. They ranged in age from 1 to 9, the youngest being twins.

Neighbor Aaron Baldwin said by the time he awoke from the woman banging on his door, her house was engulfed in flames and there was no way for neighbors to rush inside.

“It was horrible. It was the worst thing you have to see,” said Baldwin, 28, who also has five young children. “I’m seeing myself in her predicament.”

District spokeswoman Denise Dick said Aleysha was a fourth-grader at a Youngstown elementary school, where counselors were being made available as news spread about the children’s deaths.

Their mother, whom fire investigators didn’t publicly identify, was taken to MetroHealth Medical Center in Cleveland. The hospital said she was in critical condition Monday evening.

Five children, including 1-year-old twins, died in a late-night fire that swept through a house Sunday night in Youngstown, Ohio. (Dec. 10)

Seventeen-year-old Edgar Daniel Negron said it was his aunt who was hospitalized and his cousins who died.

He said the fire occurred while his aunt was spending rare time with all of her children under one roof. She has been studying nursing, and her children sometimes stayed with relatives or their godparents, but they were all together Sunday night, Negron said.

State and local investigators are trying to determine what caused the blaze. They said nothing so far indicates the fire was suspicious.

It swept through the old, two-story wood home after neighbors were awakened by a loud boom. Most of the damage was on the first floor, leading investigators to believe the fire started there, said Capt. Kurt Wright of the Youngstown Fire Department.

Firefighters found flames throughout the first floor when they arrived and were able to pull out three of the children, but they died at a hospital, Wright said.

The family had moved into the house earlier this year, according to neighbors and friends.

Virgen Bonilla said she was the children’s babysitter. She visited the charred and boarded-up home Monday with her sister and a family friend to leave flowers at a makeshift memorial where stuffed animals were piled beneath balloons.

“These kids were always with me. They were my babies,” Bonilla said, wiping away tears with her scarf as she shared memories of them — how Aleysha loved to dance, and Charles sang in Spanish, and Ly’Asia was quieter and liked to be off by herself.

Neighbor Jerry Fields also stopped outside the home to drop off stuffed animals.

Negron said he has organized a GoFundMe campaign to help with the funeral costs. City Councilwoman Anita Davis said the community plans to hold a dinner next week to raise funds for the family.

Franko reported from Columbus. Associated Press reporters John Seewer in Toledo and Lisa Cornwell in Cincinnati contributed to this report.